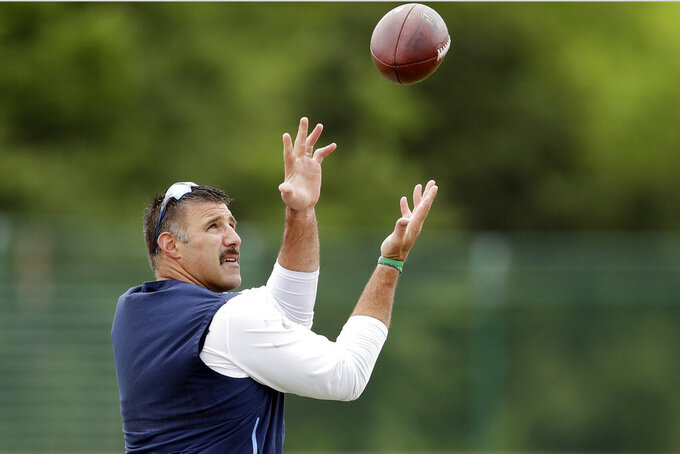 NASHVILLE, Tenn. (AP) — Arthur Smith has never called plays in the NFL. Not even in a preseason game, experience at least his predecessor had a year ago.

So the Tennessee Titans' new offensive coordinator tests himself calling plays when watching TV copies of old games and at each step of the offseason program.

That's the approach he'll follow through training camp and the preseason all building up to the season opener Sept. 8 in Cleveland.

"So we'll see how that is after Week 1," Smith said Thursday.

Smith replaces Matt LaFleur, hired in January as the Packers' new head coach. That hiring owed more to LaFleur's experience as a coordinator with the Rams and coach Sean McVay than production with the Titans, who were one of the NFL's worst offenses in 2018.

Yes, Tennessee ranked seventh in the league running the ball with Derrick Henry piling up 625 of his 1,059 yards in December. But the Titans were 29th throwing the ball, and Mariota managed only 11 touchdown passes with eight interceptions. Only five teams scored fewer points than Tennessee's 310 — an average of just 19.4 points per game.

Vrabel promoted Smith from tight ends coach to coordinator, a coach who had been with this franchise the past eight years working for four different head coaches. Smith also spent two years with Washington with first Joe Gibbs, then Jim Zorn. This is his first time as an offensive coordinator for the man who played offensive line at North Carolina.

So Smith said he studies TV copies of games for situations, including the end of a half or games for a better feel than a coach's game film showing all 22 personnel on the field. He also hits pause to make his own calls. Yes, he knows there's no pressure watching on a screen or live on the practice field.

Vrabel used a similar approach a year ago preparing for his debut as head coach, watching TV copies of games to test what he might do. He's working closely with Smith this offseason, the same way he is with Dean Pees who is 69 and has been to two Super Bowls with two different teams as a defensive coordinator.

"If I do it with Dean, there's probably a pretty good chance that I would do it with Arthur and every one of our coaches," Vrabel said. "Just try to make sure that we're all on the same page."

Easing Smith's transition is Mariota, the quarterback who has been with Smith the past four seasons through coach Ken Whisenhunt, coach Mike Mularkey and his offensive coordinator Terry Robiskie and now Vrabel.

"He makes it easy for us to go in there and to talk and to communicate what we like, what we don't like and I think even out here ... he's done a great job of pushing the envelope with our guys and doing his best to get the most out of everyone," Mariota said of Smith.

The Titans are keeping the same offense as last season, meaning formations and the phrases for motions remain unchanged. Smith made it very clear this offense will have some changes as he tweaks or adds plays from other schemes.

"I'm not above stealing a great idea ...," Smith said. "But you're just sitting here saying, 'What is somebody doing that is a good idea? Does it fit what we're doing? Does it fit some of our players?' And we're always looking at that as long as they give me the opportunity to be in this role."

NOTES: Pees spoke to reporters Thursday for the first time since deciding to return for another season. Pees dismissed any worries about his health, saying he was fine. Pees missed a loss at Indianapolis Nov. 18 when taken to a hospital, and Pees said he had an issue with a nerve in the back of his head causing symptoms similar to a stroke. ... The Titans announced after practice that they have agreed to terms with guard Nate Davis, their third-round draft pick out of Charlotte. Receiver A.J. Brown out of Mississippi, taken in the second round, is the lone remaining unsigned draft pick.