Titans rookie doesn't listen to talk comparing him to Brown 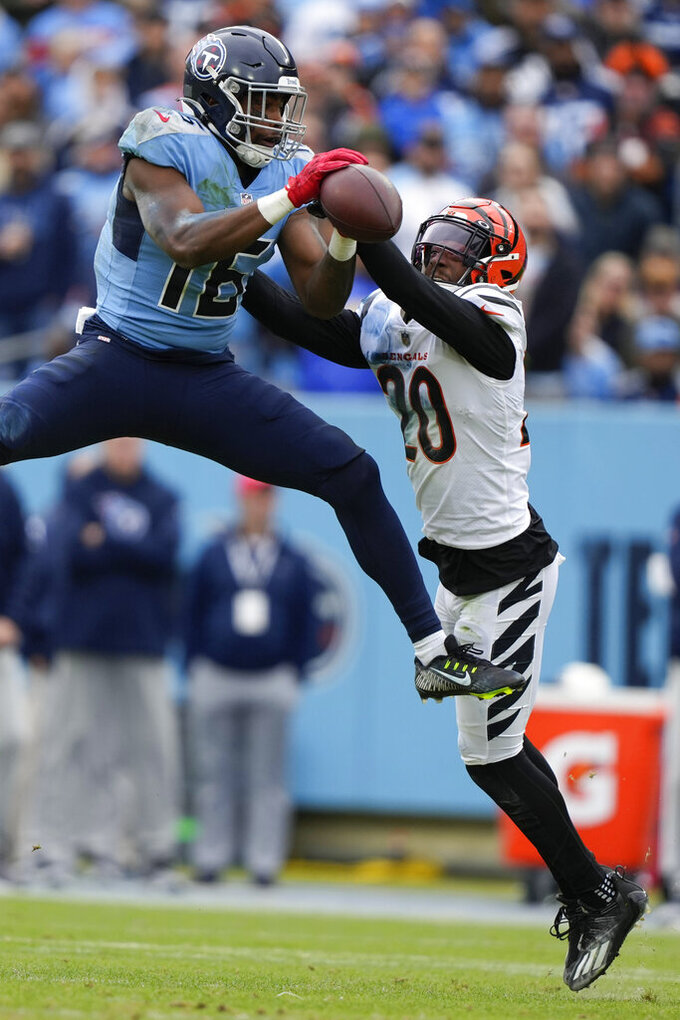 NASHVILLE, Tenn. (AP) — Treylon Burks has been compared to former Titans wide receiver A.J. Brown from the moment Tennessee drafted him using the selection gained in the trade that sent Brown to Philadelphia.

It's a heavier topic of conversation as the Titans (7-4) prepare to visit Brown and the Eagles (10-1) on Sunday.

For Burks, it's simply not an issue.

“I just don’t listen to it," Burks said Wednesday.

The 6-foot-3, 225-pound Burks likely will be compared to Brown for the rest of their careers, tied together by the stunning draft night trade in April that sent a Pro Bowl wide receiver to Philadelphia for draft picks including the 18th selection overall.

Tennessee immediately used that on Burks, an All-Southeastern Conference wide receiver out of Arkansas as a junior. Right now, there's no comparison in production for either this season or for both receivers' first NFL seasons.

Brown, the 51st pick overall out of Mississippi in 2019, posted a 100-yard receiving game in his NFL debut. He finished with 52 catches for 1,051 yards and eight touchdowns starting 11 of 16 games.

Burks has started three games, sidelined for four with a stint on injured reserve. He currently has 24 catches for 334 yards and just scored his first NFL touchdown recovering Derrick Henry's fumble in the end zone of last week's loss to Cincinnati.

Burks has a chance to join Brown in one category if he can catch at least four passes for 70 yards receiving Sunday. Brown is the only other receiver to do that in three straight games for Tennessee, and Brown did it in his lone Pro Bowl season of 2020 and 2021.

Burks was compared to Brown frequently before the NFL draft.

Titans coach Mike Vrabel said Wednesday they saw a receiver in Burks they thought could run a lot of different route trees and playing all levels along with the ability and willingness to block, catch and run and adjust to the ball while running downfield. Burks flourished in training camp and early in the season.

Then an injured left toe put him on injured reserve.

Since the rookie was activated off IR, Burks has had his two best games of the season. He posted his first 100-yard receiving game on Nov. 17 in a win at Green Bay, catching seven of eight passes for 111 yards. Burks fought off a defender for a 51-yard catch and finished with four catches for 70 yards against the Bengals.

Vrabel noted the rookie's attitude and hard work while on injured reserve to be ready when activated. The coach said Wednesday that Burks showed the ability to fix mistakes with receivers coach Rob Moore on a short week before the Titans played Green Bay on a Thursday night.

Tannehill said he thinks Burks has a better understanding of what the Titans are asking of him.

“Just understanding the nuances and and places where you have a little bit more of that freedom to to put some variance in how you run the route and when you fit in to a larger picture of of where we need you to be,” Tannehill said.

Notes: The Titans opened the practice window for OLB Ola Adeniyi on Wednesday. ... The Titans had one of their shortest injury reports in weeks Wednesday with only DT Jeffery Simmons (left ankle), DL Denico Autry (knee) and CB Elijah Molden (groin) not practicing. C Ben Jones practiced fully, trying to clear concussion protocol that has kept him out the past two games.