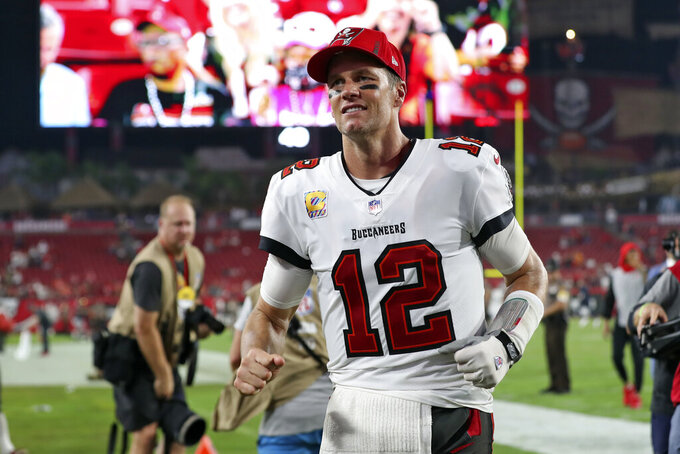 Tampa Bay Buccaneers quarterback Tom Brady (12) smiles as he runs off the field after an NFL football game against the Chicago Bears Sunday, Oct. 24, 2021, in Tampa, Fla. (AP Photo/Mark LoMoglio) 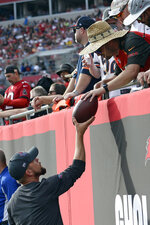 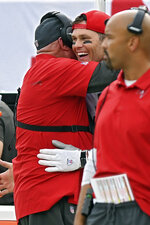 Tom Brady had one memento he wanted back from a fan in the stands and one he wanted to give his biggest little fan after his latest historic performance.

Both of the Brady admirers left Raymond James Stadium happy and sporting swag on the day Brady led Tampa Bay's 38-3 thrashing of the Chicago Bears and became the first player in NFL history to throw for 600 touchdowns.

Mike Evans grabbed touchdown No. 600 with six seconds remaining in the first quarter and promptly dropped the ball to flex. He quickly chased down the ball, but not to hand it back to Brady. Instead, he gave it to a fan in the end zone seats, then briefly celebrated with his quarterback before both jogged back to the Bucs' sideline.

Now, if Brady were the control freak Peyton Manning was, the football never would have left the field.

When Manning broke Brett Favre's record with his 509th touchdown toss seven years ago, Demaryius Thomas tossed the historic football to Emmanuel Sanders, who threw it to Wes Welker, who chucked it to tight end Julius Thomas as Manning played “Monkey in the Middle” and “tried” to get his hands on the historic pigskin.

After the game, Demaryius Thomas revealed that Manning had orchestrated the game of keep-away and that they'd even practiced it late in the week, just like they rehearsed everything else during the four seasons the meticulous Manning played in Denver.

Evans, who would catch two more touchdown throws from Brady in the game Sunday, was caught off-guard once he returned to the sideline and realized what he'd done.

“I gave the football away!” he told coach Bruce Arians, a look of dismay rushing across his face as he sat on the Buccaneers bench.

Arians joked after the game that he told Evans he was going to have to offer the fan two jerseys to get Brady's ball back.

“And he said, ‘Does he really want that ball?” Arians recounted. “And I said, ’I'm getting he wants that ball.'”

“It’s really cool. I got it in the bag over there," Brady said after the game. “Mike gave it away and said: ‘Man, I’m sorry.’ I said, that’s all right, I’m sure they’ll figure out a way to get it back.”

A team official retrieved the football from the fan in exchange for another game ball and other goodies.

“I don’t actually keep too many things. In that circumstance, I just felt like that might be a good one to keep," Brady said.

Told that the fan gladly returned the memento, explaining he couldn’t possibly say no to Tom Brady, the quarterback replied, “That’s pretty cool. He’s going to get something nice in return, so we’ll get him a helmet or a couple of jerseys or some other stuff. So, it was really cool of him to do that.”

On Monday night, Peyton and Eli Manning had Brady as their guest on their ESPN2 “Monday Night Football” telecast to banter back and forth with the seven-time champ.

Peyton Manning teased Brady about Evans' regretful giveaway of the historic football, asking him if he got it back. Yes, Brady said.

"Is the ball in Canton or have you made it into an NFT?” Manning cracked.

With about 80 seconds left in the game Sunday, Brady approached the stands himself and handed a Buccaneers “Crucial Catch” cap, which is part of the league's October cancer awareness campaign, to 9-year-old Noah Reeb, who went to the game with a sign that read, “ Tom Brady helped me beat brain cancer. ”

The little boy, whose father, James, wrote on Instagram that it was his son's first NFL game, burst into tears when he met Brady and got the cap.

“That was really sweet,” Brady said. "Obviously a tough kid, man. It puts a lot into perspective of what we're doing on the field. In the end, it doesn't mean much compared to what so many people go through.

“So, we all try to make a difference in different ways and I think so many guys commit time to their foundations and they're doing good things for the world and the NFL's doing a lot of great things,” Brady added. “So, it's just nice to think always do the best you can do, you know, under any circumstance.”

Brady isn't just the all-time leader in touchdown throws. He also is the season leader with 21 TD tosses to go with just three interceptions in seven games, so far.

At age 44, he's off to one of the best starts of his storied career, and at 6-1 the Buccaneers are off to the best seven-game start in franchise history.

Going back to last season, when the Bucs won their last four regular-season games and all four playoff games, Tampa Bay has won 14 of its last 15 games.

The only blemish in that stretch was a 34-24 loss to the Los Angeles Rams on Sept. 26 in which Brady threw for 432 yards.