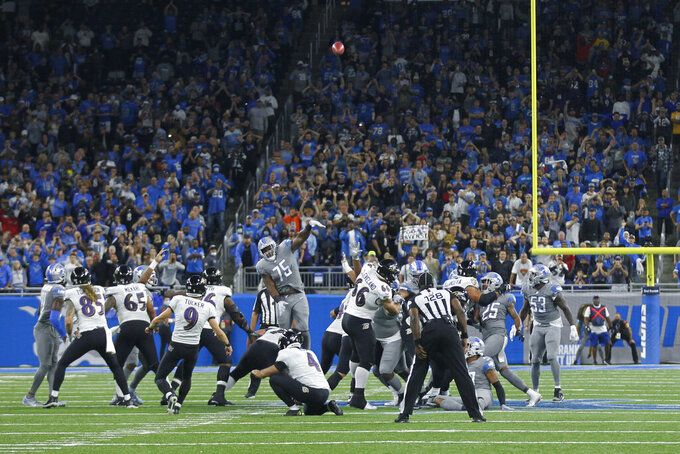 With all due respect to Adam Vinatieri and anyone else with a claim to that honor, Tucker is building quite a case.

“He does have kind of the perfect personality for the job. He likes the stage. He's not afraid of it. He relishes it," Harbaugh said. “I think that combination, with talent and good coaching, goes a long way.”

Harbaugh had quite a grin on his face when he mentioned “good coaching” — the Ravens are well aware of how much Tucker saved them Sunday when his record-setting kick gave them a 19-17 victory over the Lions. Baltimore nearly let that game slip away in the final quarter, but the Ravens had the right kicker to rescue them from a desperate situation.

“To see (and) just witness firsthand history being made, it’s surreal,” defensive end Calais Campbell said. “I’m completely humbled and honored to be on the field and block for that play. An NFL record to win the game in a hostile environment, it’s special.”

In his 10-year career, Tucker has made 91% of his field-goal attempts in the regular season, including 71% from 50 yards and beyond. He's made 17 game-winning kicks, including the playoffs, and has made all 16 of his attempts inside of a minute remaining in regulation. Tucker has also converted on 49 consecutive fourth-quarter attempts, the NFL’s longest active streak.

His blend of accuracy, leg strength and reliability may very well be unparalleled in league history — although Harbaugh said Monday he doesn't think he'd have had Tucker try the final kick if it had been a couple of yards farther.

“Honestly, probably not. I don't know how you make a 68-yarder,” Harbaugh said. “Then again, how do you answer that? You can't really answer it.”

Aside from the obvious — the kicking game — Lamar Jackson also deserves credit for playing well on a day he didn't have much help from his receivers. Jackson threw for 287 yards and kept his cool on a 36-yard pass to Sammy Watkins on fourth-and-19 that set up Tucker's winning kick.

“Those plays should go hand in hand," Harbaugh said. "You can't really talk about one without the other.”

The defense, depleted by injuries and COVID-related absences, shut the Lions out in the first half but wilted late in the game. It was similar to Baltimore's overtime loss to Las Vegas in the season opener.

The Ravens allowed only 285 total yards Sunday, but after six straight punts to start the game, the Lions scored two touchdowns and a field goal on their three second-half drives. It's fair to wonder if Baltimore's defense is being pushed to a breaking point.

Tight end Mark Andrews had five catches for 109 yards. He had a disappointing game against Las Vegas, but has rebounded in the two weeks since then.

The rest of the receiving group had a rough day in Detroit. Watkins made the big catch to set up Tucker's winning kick, but he and Marquise Brown had just seven catches on 14 targets, and there were too many drops that helped keep Detroit in the game.

Harbaugh said WRs Rashod Bateman (groin) and Miles Boykin (hamstring) are expected back at practice. Neither has played yet this season. TE Nick Boyle (knee) is not expected to practice this week.

7 — The number of times Tucker has made multiple kicks of 50-plus yards in a game, which ties Matt Prater and Brandon McManus for the most in NFL history.

Tucker might have a chance to break his new record in the thin air of Denver when the Ravens take on the Broncos on Sunday.