Unbeaten Titans bring blueprint of what winless Vikings were 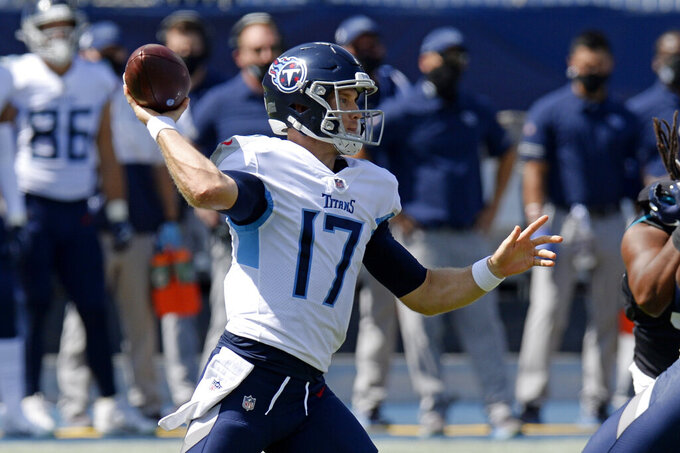 MINNEAPOLIS (AP) — The thriving veteran quarterback. The game-controlling rushing attack. The premier pass rusher. Those are some of the strengths the Tennessee Titans will take with them to Minnesota.

The Vikings could be forgiven for harboring envy, after all, for these are attributes they thought they had.

Instead, the Vikings will try to reverse course from their troubling start and pick up their first victory of this abnormal season against the unbeaten Titans, the type of team they want to be.

“We’ve made too many mistakes. We’ve had turnovers, penalties. If you go back and look at the times that we’ve been here, the identity of our team has always been tough and physical and smart and not beating ourselves,” said coach Mike Zimmer, who has his only 0-2 start in seven years with the Vikings. "So we’re going to have to fix that.”

The Vikings, who've been outscored 37-13 in the first half in runaways by Green Bay and Indianapolis, are last in the NFL in time of possession and second-to-last in turnover margin. Kirk Cousins posted the worst passer rating of his career against the Colts, Dalvin Cook has had scant opportunities to get in a ball-carrying groove, and defensive end Danielle Hunter has been sidelined since a reported neck injury at the beginning of training camp.

The Titans, on the flip side, have won their first two games for the first time since 2008, when they began 10-0. After defeating Denver by two points and beating Jacksonville by a field goal, the Titans have plenty of room for improvement. This is largely the same team that reached the AFC championship game last season, though, with Ryan Tannehill leading the league in passer rating and Derrick Henry winning the NFL rushing title. They've since added three-time Pro Bowl outside linebacker Jadeveon Clowney, on a one-year, $13 million contract to give the defense a boost.

After investing long term in Tannehill, bringing back all but one starter on an offense featuring budding stars in wide receiver A.J. Brown and tight end Jonnu Smith and bolstering the pass rush with Clowney and Vic Beasley, the Titans have high expectations. That would explain their discomfort with their overall performance over the first two games.

“You would think in this locker room that we’re 0-2,” left tackle Taylor Lewan said. “We’re focused, which I think is different than I’ve seen in past years.”

Though the Titans have been seeking more efficiency in their rushing attack while ranking just 26th in the NFL in yards per attempt, Henry is a powerful runner behind an imposing offensive line with the potential to perpetuate problems the Vikings have had along their front four. Shamar Stephen is the only starter currently in place from last season, and he had to move tackle spots after free agent addition Michael Pierce opted out due to health concerns related to the COVID-19 pandemic.

“Zimmer coaches a sound defense. They always put a tough team out on the field and guys in the right spots. I have a ton of respect,” Titans coach Mike Vrabel said. “Obviously, the scores probably don’t indicate the level of execution that they actually played with.”

The Titans have been vulnerable against the run, too. After ranking 12th in the league last season, surrendering an average of 104.5 rushing yards per game, Tennessee is just 23rd in the NFL after letting undrafted Jaguars rookie James Robinson run for 102 yards last week on an average of 6.4 yards per carry. Missing Pro Bowl defensive tackle Jurrell Casey, who’s now with Denver, the Titans allowed Jacksonville to convert 10 of 14 third downs.

Tannehill, the NFL comeback player of the year for 2019, tied his career high with four touchdown passes against the Jaguars has thrown for six scores without an interceptions this season. He has at least two touchdown passes with one or fewer interceptions in nine straight games. If he does that again Sunday against the Vikings, the ninth-year player would become the fourth quarterback in NFL history with such a streak of 10 consecutive games, joining Aaron Rodgers (13 in 2011), Tom Brady (11 in 2010-11) and Philip Rivers (10 in 2017-18).

In the 12 regular-season games they've played since Tannehill took over as the starter, the Titans have 130 fourth-quarter points, the most in the league. The Vikings are second with 119.

The Titans could be without Brown for a second straight game because of a bone bruise in his knee, and they’ve got some injury issues at cornerback. Malcolm Butler (quadriceps) was limited in practice Thursday, and the other original starter, Adoree’ Jackson (knee), was placed on injured reserve last week. Backups Johnathan Joseph (calf) and Chris Jackson (hamstring) were also on the injury report this week.

The Vikings, who lost four-time Pro Bowl outside linebacker Anthony Barr for the season with a torn pectoral muscle suffered against the Colts, are in rough shape at cornerback with Mike Hughes (neck) and Cameron Dantzler (rib) iffy for Sunday.