An unhappy homecoming this time for Ravens QB Lamar Jackson 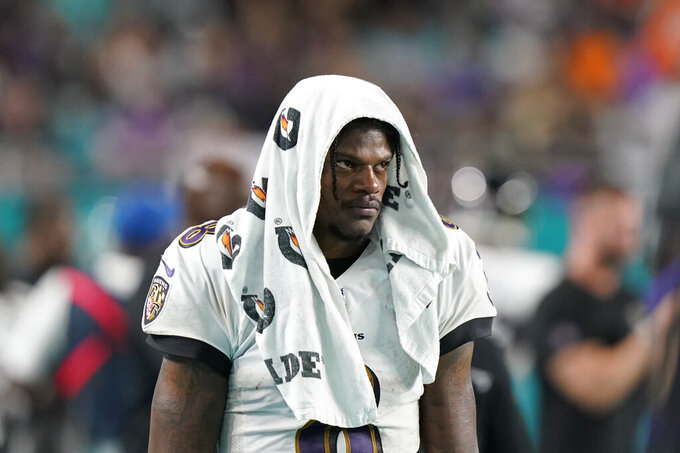 Baltimore Ravens quarterback Lamar Jackson (8) walks with a towel on his head during the second half of an NFL football game against the Miami Dolphins, Thursday, Nov. 11, 2021, in Miami Gardens, Fla. (AP Photo/Lynne Sladky) 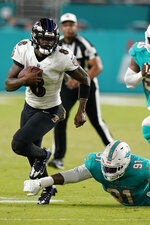 MIAMI GARDENS, Fla. (AP) — This time, Lamar Jackson’s homecoming was anything but perfect.

And a Baltimore team that had grown accustomed to blowing out Miami had nowhere near enough answers to keep up with the Dolphins on Thursday night.

Jackson and the Ravens were thwarted all night, falling 22-10 to the Dolphins in prime time. Baltimore was kept out of the end zone until the final minutes, went 11 possessions between scores and ended up with its lowest scoring total in a regular-season game since a 12-9 loss to Cleveland on Oct. 7, 2018.

Jackson’s numbers were fine: 26 of 43 passing for 238 yards and a touchdown, with one interception in the final moments and Baltimore needing a miracle at that point anyway. He had to work for just about all 26 of those completions, for just about all of those 238 yards. The Dolphins came at him in waves, forcing him to bounce some passes, overthrow a few others, never letting him get comfortable.

“We just didn’t handle it well,” Ravens coach John Harbaugh said. “They’re blitzing us and we’ve got to handle it a lot better.”

The last time Baltimore was in Miami, the Ravens handled everything — and in Jackson’s case, handled it perfectly. He had a flawless 158.3 quarterback rating in that 59-10 romp that opened the 2019 season, and a nine-play drive that got the Ravens on the board with a field goal to open the game Thursday made it seem like the offense had potential to have a big night again.

It started as a matchup of quarterbacks who grew up playing high school football in Palm Beach County, probably less than an hour’s drive north of Hard Rock Stadium. Dolphins quarterback Jacoby Brissett was the county’s player of the year in 2010, Jackson the county award winner in 2014.

A year later, Jackson was the Heisman Trophy winner. Before long, he was an NFL MVP. He usually doesn’t get stymied by any defense.

But Miami found a way.

“We're going to get right," Jackson said. “We've got to. We've got no other choice."

They didn't get right in time on Thursday night. Jackson tried to spark his teammates on the sideline, but nothing got the Ravens on their customary roll.

“I feel like our defense played lights out,” Jackson said. “We just weren’t getting it done on offense. That’s why I was mad.”

Just like that, the AFC North race is even tighter, now with one game separating first place from last place. Baltimore is 6-3, for now a half-game ahead of Pittsburgh (5-3) and a game up on both Cleveland (5-4) and Cincinnati (5-4).