Vikings in Baltimore for first time since wild 2013 game 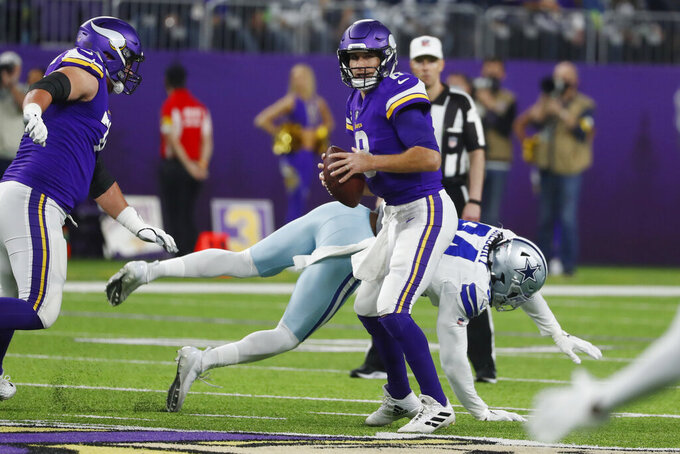 The last time the Minnesota Vikings played at Baltimore was eight years ago — yet Ravens coach John Harbaugh can still recall many of the details vividly.

“I remember getting the lead with like two minutes left and thinking it's OK. Then, all of a sudden, the field looked like an ice rink, right?” Harbaugh said. “Our guys are sliding around, we couldn’t tackle.”

The Ravens ultimately won that 2013 game 29-26, but only after the teams combined for five touchdowns in the final 2:05. There's a YouTube clip of that snowy finish titled “The Craziest Final 2 Minutes in NFL History” — it was a remarkable clash between teams that rarely play each other. The Vikings return to Baltimore to face the Ravens this Sunday.

The Vikings have had very little success in Baltimore over the years. They went 0-8 against the Colts there before that team moved to Indianapolis. They're 1-3 on the road against the Ravens. Minnesota came close in that 2013 game, but lost on Marlon Brown's touchdown catch with 4 seconds left.

“Five teams won that day, but we won the last time, and that’s the one that counted the most,” Harbaugh said.

The Ravens (5-2) enter this week's game coming off their open date, which was a productive weekend off for them. Cincinnati's loss left Baltimore in sole possession of first place in the AFC North.

The Ravens, however, got a wake-up call in their final game before the break, losing to the Bengals 41-17 at home. Baltimore has allowed three opposing quarterbacks to throw for 400 yards this season, including Cincinnati's Joe Burrow.

“It’s over with. We expect better,” safety DeShon Elliott said. “We have high expectations of ourselves — each person individually and as a team — and at that point, after a couple days went by, we were just kind of like, ‘All right, it’s over with. New week, new opportunity.’”

The Vikings (3-4) are in a more difficult spot. They are 3 1/2 games behind NFC North-leading Green Bay, and they're in the middle of a tough stretch in the schedule. Minnesota lost to Dallas 20-16 last week. Now the Vikings play at Baltimore before traveling to face the Los Angeles Chargers and hosting the Packers.

“We still have 10 more games," defensive end Everson Griffen said. “If we go out here and win these 10 next ones, we’d be 13-4 and it would be a whole different conversation we’d be having. We’re 3-4 right now. The light at the end of the tunnel still is bright for us.”

Since their inception in 1996, the Ravens are 17-8 in games immediately following a bye week, the best mark in the NFL. Harbaugh is 10-3 in those games.

The Vikings didn’t turn the ball over and took only one sack in their loss to Dallas, but after a touchdown on the opening drive of the game, eight of their next 11 possessions lasted five plays or fewer. They had three straight three-and-outs in the second half, all the while failing to establish any kind of a rhythm in the passing attack with stars Justin Jefferson and Adam Thielen.

According to the NFL’s Next Gen Stats, quarterback Kirk Cousins averaged 5.2 yards short of the sticks per pass attempt against the Cowboys, by far the worst mark of the week in the league. Jefferson had fewer catches (two) than fullback C.J. Ham (three) as Cousins struggled to get comfortable in the pocket with the way the Cowboys were pressuring at the line and covering downfield.

“There will always be those moments when you weigh whether you should push the ball downfield or not, and I think there were a couple times I wish I had,” Cousins said. “You keep trying to learn every single time.”

The Ravens have the longest active winning streak in the league against NFC teams. They've won 11 in a row and haven't lost since an October 2018 defeat at Carolina.

The Vikings lead the league in sacks per game, having already topped their 2020 total (23) by one in nine fewer games. A quarter of their sacks have come, however, from star Danielle Hunter, who tore his pectoral muscle in the last game and will miss the remainder of the season. That means D.J. Wonnum will be back in the starting lineup opposite Griffen.

“It has definitely been a lot of learning curves, being able to take a lot of reps and take that step forward from my rookie year,” said Wonnum, who has 14 tackles, one sack and three quarterback hits in seven games while playing 66% of the snaps.

Fellow youngsters Patrick Jones and Kenny Willekes will also figure into the rotation with Hunter out.

The Baltimore offense ranks 23rd in the league in third-down efficiency, and Minnesota is tied for 24th.

“Hopefully, we make it a positive this go-around off the bye week," Ravens quarterback Lamar Jackson said. “Just dial in on that third down a little more and try to stay on the field for our defense.”

On defense, Baltimore ranks fourth in the NFL on third down and Minnesota is tied for fifth.