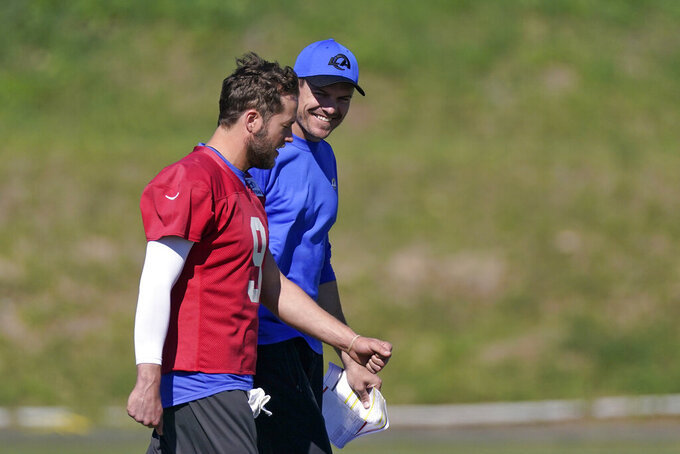 MINNEAPOLIS (AP) — The Minnesota Vikings finalized their hiring of head coach Kevin O'Connell on Wednesday, completing a sharp offseason shift in direction by turning over the team to the 36-year-old offensive coordinator of the Super Bowl champion Los Angeles Rams.

Three days after the Rams beat Cincinnati for the title, O'Connell formally assumed his branch of the Sean McVay tree. He's now the fourth former assistant under the head coach of the Rams to become an NFL head coach himself.

O'Connell replaces Mike Zimmer, fired last month after eight seasons and only two playoff-game wins, and will be introduced on Thursday at team headquarters as the 10th head coach in Vikings history. The Rams scheduled their Super Bowl parade on Wednesday.

“One of the most important things as a coach is, ‘Do the players know that you care about them and can you make them a better football player?’" McVay said before the Super Bowl. “Kevin checks both of those boxes. He’s got a great way about himself with people. He’s got phenomenal character. I can’t say enough good things about him and how fortunate I’ve been to have gotten to know him the way that I have over these last couple of years. He’s been vital to our success."

Drafted in 2008 by the New England Patriots to be Tom Brady's backup — Brady was already eight years into his seven-time Super Bowl-winning and three-time NFL MVP career — O'Connell remarkably became a head coach in the same offseason that Brady finally retired.

O'Connell attempted only six passes for the Patriots as a rookie, the only regular-season attempts of his career, and he was released the following year. Claimed by the Detroit Lions, he lasted five days there before a trade to the New York Jets.

After a torn labrum sidelined him for the 2010 season, O'Connell bounced from the Jets to the Miami Dolphins and then back to the Jets in 2011. He had a preseason stint with the Chargers in his native San Diego in 2012, but that was the end of his time as a player.

During his time buried on those depth charts, O'Connell continually impressed his coaches and teammates with his grasp of the offense, vision of the field and studious nature.

After dabbling in broadcasting, his first NFL coaching job came with the Cleveland Browns in 2015 as their quarterbacks coach. The following year, he worked on special projects for the San Francisco 49ers, when he befriended Kwesi Adofo-Mensah, the recently appointed general manager of the Vikings who was in research and development for the 49ers.

O'Connell went to Washington in 2017, when he supervised Kirk Cousins as quarterbacks coach and stayed there two more years with the additional passing game coordinator title after Cousins moved on to Minnesota. McVay hired O'Connell in 2020 as his offensive coordinator, and his second season in L.A. ended on the ultimate high note with the 23-20 victory on Sunday over the Bengals.

“I wouldn’t be where I am right now, playing this game with the group the way we’ve been playing, if it wasn’t for his help,” Rams quarterback Matthew Stafford said prior to the Super Bowl. “He does an unbelievable job not only teaching the game but what we’re trying to do at our position as quarterback. His demeanor and his ability to communicate, and get to know guys on our team and demand a lot at the same time, is something that I think will serve him well.”

O’Connell was essentially earmarked as a future coach before he got to the NFL. At 6-foot-5 and 225 pounds, he was a dual-threat quarterback at San Diego State who topped 3,000 passing yards and rushed for 11 touchdowns and over 400 yards as a senior for the Aztecs.

“He was just full of charisma, and you could tell he had some great leadership qualities,” said Chuck Long, who took over as San Diego State’s head coach halfway through O’Connell’s college career. “We connected really quick, just because he wasn’t a prima donna or anything. The kid wanted to learn and wanted to learn fast, and he absorbed things quickly.”

Teammates naturally gravitated to O’Connell, said Long, and once he became comfortable in the new offense he didn’t hesitate to lend his voice to the game planning.

“He would confer with us on the sideline during crucial timeouts, and we’d give him a play, and he’d say, ‘No, no, no, I feel good about this play,’ and it would work,” Long said in a phone interview. “He had that kind of rapport and knowledge of the game.”

The most important order of business for O’Connell’s first year, in conjunction with Adofo-Mensah and the front office, will be to determine the path forward at quarterback. Cousins is entering the final year on his contract with a hefty $45 million salary cap charge and a 59-59-2 career record as a starter, plus 1-2 in the playoffs.

“He understands what is critical to leading a team that wins at the highest level, and he has an ability to simplify the complex, which will help us in problem solving in all football areas,” Adofo-Mensah said in a statement from the Vikings. “He is a genuinely positive person who will help create a high-energy internal environment.”