Vikings host Lions in quest to rebound from Philly flop 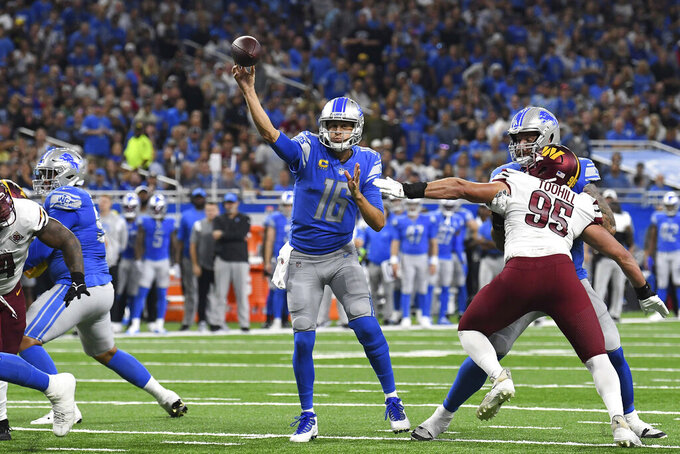 Detroit Lions quarterback Jared Goff (16) throws a pass during the first half of an NFL football game against the Washington Commanders Sunday, Sept. 18, 2022, in Detroit. (AP Photo/Lon Horwedel)

OPENING LINE: Vikings by 5½, according to FanDuel Sportsbook.

TURNOVER DIFFERENTIAL: Lions even; Vikings even.

LIONS PLAYER TO WATCH: WR Amon-Ra St. Brown. He had nine catches for a career-high 116 yards and two TDs along with a 58-yard run — the longest by a Lions WR — against Washington. In his second year, St. Brown is the first player in league history with at least eight catches and a TD in six straight games. St. Brown, Michael Thomas (2019) and Antonio Brown (2014) are the only three players in NFL history with eight-plus receptions in eight straight games.

VIKINGS PLAYER TO WATCH: OLB Danielle Hunter. He has 12 sacks in his past eight games against the Lions with two fumble recoveries and one for a touchdown. Hunter had a sack in each of the first two games this season.

SERIES NOTES: Each of the past three matchups have been decided by exactly two points. ... Detroit's win last season stopped an eight-game winning streak in the series by Minnesota. Prior to that, the Lions won nine of 14. ... Vikings QB Kirk Cousins has 19 TDs, two interceptions, a 74.2% completion rate and a 119.9 passer rating in nine career starts against the Lions. His record is 7-2.

STATS AND STUFF: The Lions have scored 35-plus points in three straight games for the first time since the NFL-AFL merger in 1970. Green Bay and Seattle in 2020 were the previous NFL teams with 35-plus points in the first two games of a season. ... The Lions have rushed for 180-plus yards in two straight games for the first time since 2010. The previous NFC team to do so in the first two games of a season was Atlanta in 2006. ... The Lions had their largest halftime lead (22-0) last week in nearly four years. ... Hutchinson became the first NFL player in 20 years since Tennessee's Carlos Hall to have three sacks over the first two games of a career. ... If St. Brown has a TD catch, he'll set a Lions record with one in seven straight games. ... Cousins is 8-4 at home with Minnesota against NFC North opponents. ... The Vikings have allowed three sacks, tied for the seventh fewest in the league. ... Vikings RB Dalvin Cook had a career-low six carries last week for 17 yards. ... Vikings backup OLB D.J. Wonnum has a sack in three straight games. ... Vikings LB Jordan Hicks is the only player in the NFL with at least 15 tackles, one sack and one interception.

FANTASY TIP: The Vikings have been vulnerable in underneath pass coverage, making Lions TE T.J. Hockenson a viable play. He has two TDs in his past four games versus the Vikings. Eagles TE Dallas Goedert had five receptions for 82 yards last week against Minnesota.