White steps in, leads Jets to wild 34-31 win over Bengals 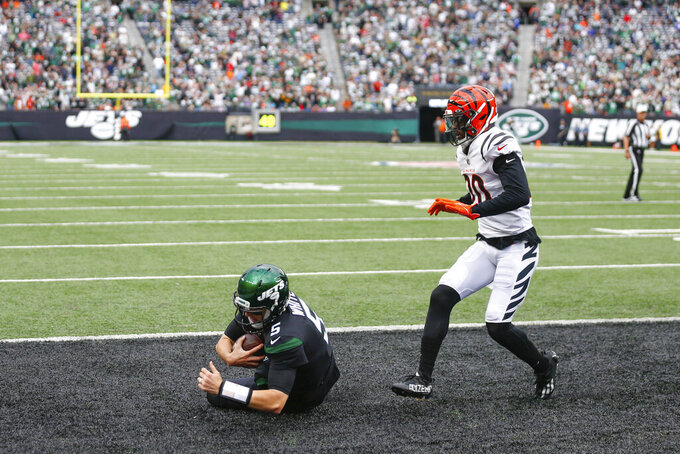 EAST RUTHERFORD, N.J. (AP) — Mike White caught himself listening to the crowd for a moment during his first NFL start.

The shouts of New York Jets fans echoed throughout MetLife Stadium, and the quarterback realized they were celebrating him.

"At first, I kind of had to listen again," White said with a smile after leading the Jets to a stunning 34-31 comeback victory over the Cincinnati Bengals on Sunday. “Like, are they chanting my name?”

They sure were, and for good reason.

White threw for 405 yards and three touchdowns, caught a 2-point conversion pass on the go-ahead score and joined Cam Newton (2011) as the only players since at least 1950 to throw for 400 or more yards in their first career start.

White, starting in place of injured rookie Zach Wilson, pulled off the improbable victory for the Jets (2-5) while going 37 of 45 — setting an NFL record for the most completions in a player's first start.

“Going out and watching film at the beginning of the week and seeing what they do on defense, I knew there would be completions out there,” White said.

He overcame two early interceptions and also became the Jets' first 400-yard passer since Vinny Testaverde threw for 481 on Christmas Eve 2000, a span of 327 games. And he even left for a few plays to be checked for a neck injury.

All that from a backup who was a fifth-round pick of Dallas in 2018 out of Western Kentucky and hadn't thrown an NFL pass until last week. And with Wilson still out for at least next Thursday night's game Indianapolis, White will get a chance for an encore.

With the Bengals (5-3) leading 31-20 in the fourth quarter, the Jets got an acrobatic touchdown by Johnson, who took a short pass from White and tip-toed down the left sideline and reached over the goal line for a 19-yard score. It was initially ruled Johnson stepped out at the 2, but video review overturned the call and confirmed the touchdown.

Shaq Lawson then came up with the Jets’ first interception of the season, deflecting Joe Burrow’s pass and snagging it to give New York the ball at the Bengals 14.

Two plays later, White found a wide-open Tyler Kroft in the back of the end zone to give New York a one-point lead.

The Jets went for the 2-point conversion and turned to some trickery with the Jets’ twist on the Eagles' “Philly Special.” Jamison Crowder tossed it to a wide-open White in the end zone to make it 34-31 with 3:45 left.

It all had the fans at a half-filled MetLife Stadium loudly chanting: “Mike! White!”

“He deserved that!” running back Michael Carter said. “You saw what he did out there today.”

The Jets forced the Bengals to punt on fourth-and-19 from the 40. Cincinnati never got the ball back.

“Got outcoached, got outplayed today,” Cincinnati coach Zac Taylor said. “They’re a hungry team. We knew they were capable of this.”

On third-and-11, Johnson was stopped for no gain on a catch but Mike Hilton was called for unnecessary roughness. That gave New York the first down, and White took a knee in victory formation moments later.

“It’s a wakeup call, for sure," Bengals defensive end Sam Hubbard said. "Any team can beat anybody on any given Sunday. We learned that today. It’s a valuable lesson that won’t be forgotten.”

After becoming the the first team to go scoreless in the opening period in its first six games since the 2008 Detroit Lions, the Jets scored on their first drive on Carter's 8-yard touchdown run.

New York changed up a few things: Offensive coordinator Mike LaFleur was in the booth instead of on the sideline, and Saleh chose to take the ball for the first time rather than defer after the Jets won the coin toss.

WHAT AN (ALMOST) CATCH

Cole had the most jaw-dropping non-catch of the season late in the first half.

Cole, who stuck out his right hand to catch the ball and pinned it between his legs as he fell backwards for what appeared to be a 12-yard touchdown grab. It was reminiscent of Odell Beckham's now infamous one-handed grab on this same field while with the Giants in 2015.

But a video review overturned the score, with officials saying Cole didn't maintain possession — setting off boos on Halloween from the Jets fans.

New York came right back two plays later on Braxton Berrios' TD catch that cut the Jets' deficit to 17-14 with 15 seconds left in the first half.

Bengals: Rookie RG Jackson Carman was carted off in the fourth quarter with a back injury.

Jets: LT George Fant was carted off with an ankle injury late in the second quarter and didn't return. He was replaced by Chuma Edoga.

Jets: Have a quick turnaround and play the Colts in Indianapolis on Thursday night.