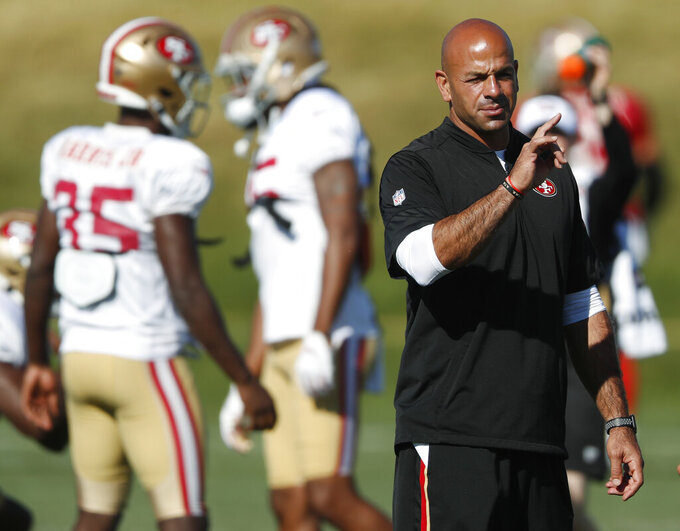 FILE - In this Aug. 17, 2019 file photo, San Francisco 49ers defensive coordinator Robert Saleh directs players during a combined NFL training camp with the Denver Broncos at the Broncos' headquarters in Englewood, Colo. The Cleveland Browns are meeting with Saleh about their coaching job. Saleh's defense dominated Cleveland in a game this season. Browns owner Jimmy Haslam and members of the team's search committee will interview Saleh on Saturday, Jan. 4, 2020.(AP Photo/David Zalubowski, File)

SANTA CLARA, Calif. (AP) — The San Francisco 49ers defense features a fearsome pass rush, a shut-down cornerback in Richard Sherman and a group of safeties and linebackers that excel in pass coverage.

So it's no surprise that teams look to the run when they attack it.

That figures to be the case Saturday when the Niners must deal with one of the game's most dangerous backs in Dalvin Cook as they host the Minnesota Vikings in a divisional round playoff game.

"Coming into this game, throughout the year, obviously against the run hasn't been our strong suit throughout the year. I know they're definitely going to challenge us in the run game early," defensive tackle DeForest Buckner said. "Especially with Dalvin Cook back there, he's one of the best in the league. We've just got to do a really good job with shutting that down early."

Stopping the run has been one of the few weaknesses all season for the 49ers (13-3), who used one of the league's stingiest defenses to earn the top seed in the NFC playoffs for the first time since 1997.

San Francisco allowed only 169.2 yards passing per game this season, the fewest in the league in 10 years. That success was fueled by a pass rush that aligned the defensive ends out wide to create better angles to rush the quarterback but also left some holes in the middle for runs.

That could be a problem against an offense that relies so heavily on the run thanks to Cook and backup Alexander Mattison.

"They run the football really well," linebacker Fred Warner said. "Very effective at it. It's going to be a grimy game for sure. ... We know what they trying to do. It's going to be grimy. We're going to have to get after it."

The Vikings ran the ball at the third highest rate in the league, with their 49.1% frequency trailing only Baltimore and San Francisco.

Cook is the workhorse in the backfield and the entire offense feeds off his running, which helps set up the deep play-action shots for Kirk Cousins.

"Dalvin is a special player," Vikings offensive coordinator Kevin Stefanski said. "When he touches the ball, good things happen. Does it open up other elements of our game? Certainly it does, and we're never going to shy away from saying that we're going to be multifaceted in how we attack a defense, so having number 33 is certainly a nice bonus for us."

Cook ranked seventh in the league with 81.1 yards rushing per game despite being limited at times by injuries. He topped 100 yards on the ground in five of the first seven games before slowing down a bit in the second half.

But he rested up the final two weeks of the regular season and had 130 yards from scrimmage and two TDs in last week's win at New Orleans.

"I've been watching him since Florida State," rookie defensive end Nick Bosa said. "He's really good. Not many people could just maintain the speed that he maintains through contact. He just makes cuts and never slows down. He's physical. They've got two of them, so it's going to be a challenge. We've played some good backs, but we haven't played him. We just got to bring it."

The Niners were in the middle of the pack defensively against the run, but much of the damage against them was done by teams that featured running quarterbacks like Arizona's Kyler Murray and Baltimore's Lamar Jackson.

Only two running backs reached 100 yards rushing in a game, with Kenton Drake doing it for the Cardinals and Carolina's Christian McCaffrey gaining 77 of his 117 yards on two long runs.

The Vikings are counting on Cook being able to do that to spark the play-action passing game that has helped Cousins have success in an offense that harkens back to the days when 49ers coach Kyle Shanahan's father, Mike, was winning back-to-back Super Bowls in the 1990s with the Broncos.

"It is more of old school, grind-it-out offense," defensive coordinator Robert Saleh said. "When you look at the Shanahan system and the zone scheme, going way back to the Denver days with Terrell Davis and all that. They're a very physical bunch, they really are. So, the challenge really is we've got to do a good job setting edges, filling gaps and making sure the back doesn't have a lane to run through."

NOTES: LB Kwon Alexander (pectoral) will be activated off IR and is set to return for the first time since Oct. 31. ... DE Dee Ford (quadriceps, hamstring) and DL Kentavius Street (knee) are both listed as questionable.