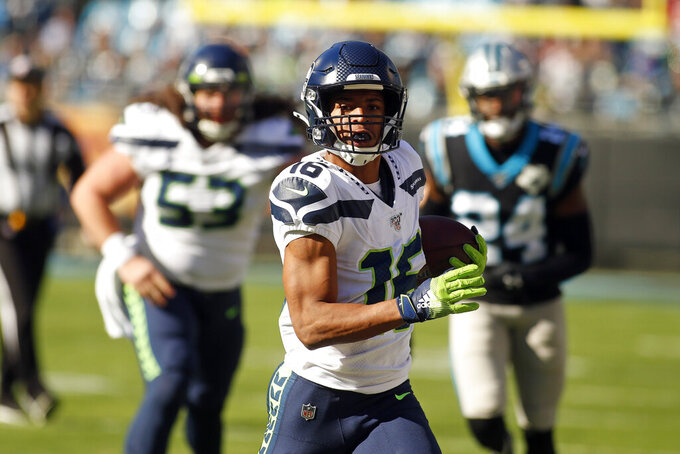 Seattle Seahawks wide receiver Tyler Lockett (16) runs the ball against the Carolina Panthers during the first half of and NFL football game in Charlotte, N.C., Sunday, Dec. 15, 2019. (AP Photo/Brian Blanco)

RENTON, Wash. (AP) — After a rough few weeks due to injury and illness, Tyler Lockett’s return to form against the Carolina Panthers was a huge boost for the Seattle Seahawks.

Lockett had been ailing since mid-November when a badly bruised shin required a stay in a Bay Area hospital following a win over the San Francisco 49ers. Then as the bruise began to heal, Lockett became one of several Seahawks to come down with a nasty case of the flu.

That changed against the Panthers as Lockett caught eight passes for 120 yards and a touchdown.

“He was just kind of battling through,” quarterback Russell Wilson said. “He is such a tough warrior in how he prepares and how he plays, plays through injuries and stuff like that. He is back to full speed Tyler Lockett, which is a great thing for us.”

The highlight for Lockett was a 44-yard catch behind close coverage from cornerback Donte Jackson. His ability to stretch a defense vertically is important for Seattle's offense because of what it opens up for his teammates underneath.

“It felt good but the biggest thing about it was everybody on our team can ball, so even when I’m not getting the chances or anything like that, you see other people that are being able to take advantage of their opportunities.” Lockett said. “For me, that’s just the biggest thing because if you just have one person that teams can focus on, a team’s not really going to be able to go far.

Without that extra kick in his step in recent weeks, Seattle’s passing attack hadn’t been quite as productive as it has been earlier in the season. Lockett was on pace to potentially break multiple team receiving records this season before the injuries and illness limited him to just eight catches for 107 yards in his previous four games combined.

“It was a beautiful sight because you see some amazing things, like that catch he had,” receiver David Moore said. “Everybody probably thought it was going to be a pick but somehow Tyler came up with it.”

Moore and Lockett were afflicted with the flu at the same time and Moore said it took over a week after the illness subsided to begin feeling back to normal again.

“He always wants to see everyone else do great,” Moore said. “He had it rough coming off the sickness, both of us. Then he found himself back this past game and it was like Tyler is doing good again and he and Russ are connecting again.”

The Seahawks had averaged 24.8 points per game in their first 10 games of the season as Lockett gained nearly 800 yards and six touchdowns over that span. But with Lockett ailing the last few weeks, Seattle’s offense failed to score a touchdown against the Los Angeles Rams and was held to just 17 points against Philadelphia. Seattle's 37-30 win over Minnesota was bolstered by the ground game which had 218 yards rushing.

With four defensive starters out against Carolina and two more leaving the game with injuries, the Seahawks needed their offense to carry the load and Lockett’s resurgence helped kick their attack into gear.

“We’re better when he’s playing like that,” head coach Pete Carroll said. “You can see. Look at Russ’ efficiency numbers when he’s got Tyler on the field. That’s no accident. Russ was on a tear with his numbers. It’s great to have him back, he’s a wonderful football player.”

Lockett is just 6 yards shy of going over 1,000 yards on the season for the first time in his career.