Boselli carries memories of late father into Hall of Fame 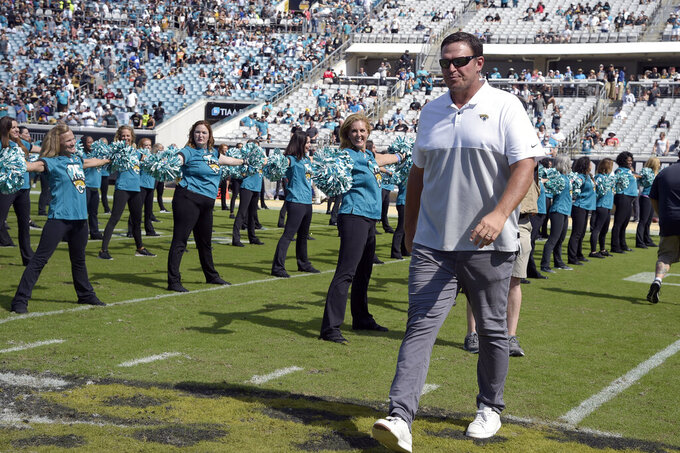 FILE - Former Jacksonville Jaguars player Tony Boselli is honored on the field during halftime of an NFL football game against the New Orleans Saints Sunday, Oct. 13, 2019, in Jacksonville, Fla. Boselli will be inducted into the Pro Football Hall of Fame on Saturday, Aug. 6, 2022. (AP Photo/Phelan M. Ebenhack)

JACKSONVILLE, Fla. (AP) — Tony Boselli has a video to watch, a bona fide tear-jerker that’s sure to turn one of the toughest offensive tackles in NFL history into an emotional wreck.

Tony’s friends and family played it for him during a party celebrating his induction into the Pro Football Hall of Fame in early February. The 6-foot-7 Colorado native and former USC star nicknamed “Big Bo” couldn’t bear to even peek at the big screen.

The first pick in Jacksonville Jaguars history and the franchise’s first Hall of Fame selection buried his face in his hands, losing control as an ultra-proud father gushed about his uber-successful son.

“I get emotional just thinking about it,” Boselli said recently. “I still haven’t got up the strength to go back and watch it all.”

He plans to, though. Boselli hopes to muster the nerve to hit play before next Saturday’s Hall of Fame enshrinement in Canton, Ohio. It will be nearly a six-month wait to watch the entire nine-minute clip, a relatively brief delay considering it took Boselli six years to gain entrance into the NFL’s most esteemed club.

His dad was there for every minute and milestone — except the final and most fulfilling one.

“I know he would have been just over the moon,” Boselli said. “And so, selfishly for me really more than anything, him not being here is hard. But I know that he was proud of me. It doesn’t take away the fact that he was there every step of the way during my journey.

“But there’ll be a small little void in Canton without him being there, but I know he’s there in spirit. I believe he’s looking down from heaven smiling and proud of his oldest son making it to the Hall of Fame.”

The 50-year-old Boselli credits his namesake for being a role model, a mentor, a friend and a hero. Boselli Sr. taught his oldest son how to water ski, snow ski and play just about every sport. The elder Boselli would spend all day managing a McDonald’s franchise in Boulder and come home to play baseball, basketball or football with the kids.

Fostering a strong work ethic was always the main goal, and Tony was clearly paying attention. It helped him through high school, college, the NFL and in life after football.

Boselli was a five-time Pro Bowl selection in seven seasons in Jacksonville. His relatively short career was the main reason he needed six tries as a finalist to get a bronze bust.

His playing days were cut short because of a botched shoulder surgery, an injury that never allowed him to get on the field after the Houston Texans made him the top pick in the 2002 expansion draft. Nonetheless, Boselli has the distinction of being the first pick in the history of two franchises.

During his Jacksonville tenure, he was perhaps the best left tackle in the league. He allowed 15½ sacks in 91 games and was a three-time All-Pro (1997-99).

He took his game to another level against the NFL's top competition, stifling stars such as Reggie White, John Randle and Bruce Smith along the way. He dominated and frustrated Smith during a wild-card game in December 1996, holding the league’s Defensive Player of the Year without a sack in Jacksonville’s 30-27 victory.

Boselli gained even more recognition two years later when he manhandled and even taunted Miami’s Jason Taylor on “Monday Night Football.” Boselli and Taylor exchanged verbal jabs throughout the prime-time game, which the Jaguars won 28-21, and their highly anticipated matchup got heated when Boselli motioned to Taylor to follow him down the field after Jacksonville scored a late touchdown.

“I think he wound up getting a personal foul,” said Taylor, a 2017 Hall of Fame inductee who played 15 NFL seasons. “It was probably for unnecessary roughness because he was wearing my (butt) out.

“If they didn’t turn the lights out, lock the gate and make everybody leave the stadium, I would still be there right now with him whipping my (butt).”

While those two games deservedly get plenty of attention in Boselli’s career, his best play often gets lost in the shuffle. On Nov. 8, 1998, Cincinnati cornerback Artrell Hawkins scooped up Mark Brunell’s fumble at the Jaguars 40-yard line and appeared headed for a touchdown. But Hawkins started celebrating too soon and pointing at a 330-pound Boselli who was chasing him. Boselli ended up catching him at the 15.

Six plays later, Jaguars cornerback Aaron Beasley picked up Neil O’Donnell’s fumble and returned it 90 yards for a score and a 24-0 lead.

“Hopefully, it defines the whole team,” Boselli said after the victory.

It certainly did Boselli, a hard-nosed left tackle who was willing to do anything to help the Jaguars win. He was a leader in the locker room and in the community, and he remains an integral part of the organization more than two decades after his last game. He's currently an NFL radio analyst for Westwood One and part of Jacksonville's preseason broadcast team.

The Jaguars worked with Boselli's wife of 27 years, Angi, to shoot the video of Boselli's dying father. Boselli Sr. had spent some of his final months near his son in Jacksonville while getting treatment for melanoma. He died on Memorial Day 2021.

The team's video staff whittled the nine-minute video into a 90-second clip for the HOF party, with Boselli Sr. sharing his thoughts in a voice softened from cancer treatments.

“He was a really tough character. He was tough in all sports and everything that he did. He was the hardest-hitting player on the team. Today, Tony Boselli is a hard-working man," the elder Boselli said. "In fact, there’s many times I’ve told Tony, ‘Quit working so hard. You’re working too many hours and you’re doing too much.’ He says, ‘Dad, that’s OK, because you were a hard-working man, too, and you supported us and you always showed us how to be that kind of character.’

“Tony was the most gifted athlete out there. I would like to share with him how proud I am of what he’s accomplished throughout his years of football, throughout his years of being a man, and everything that he has done to get to this position. Because he has done a lot more than just play football to get to this position. He is truly a great man.”

And now he has a gold jacket to wear and an emotional video to watch.