At the bottom: Bengals only 0-6 team in the league 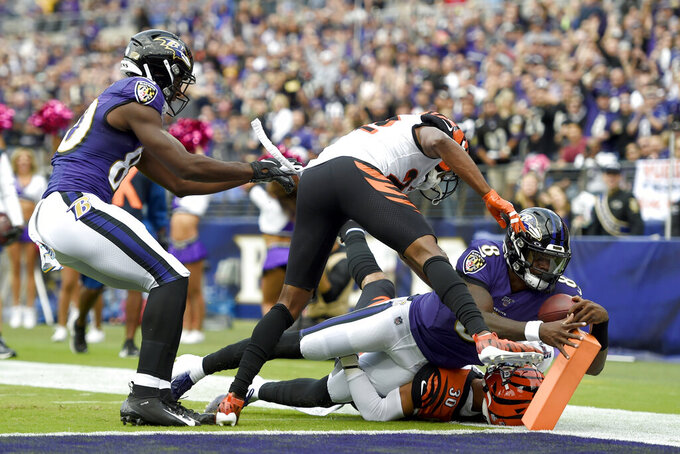 Baltimore Ravens quarterback Lamar Jackson (8) dives in for a touchdown on a run against the Cincinnati Bengals during the first half of a NFL football game Sunday, Oct. 13, 2019, in Baltimore. (AP Photo/Gail Burton)

CINCINNATI (AP) — Linebacker Preston Brown grew up in Cincinnati watching the team then known as the "Bungles" lurch from one horrible season to another.

He's getting closer by the week.

The Bengals are the only 0-6 team in the NFL after their 23-17 loss in Baltimore , their worst start in 11 years. The only other winless team is Miami at 0-5. There are three one-win teams — Jets, Redskins and Falcons.

Cincinnati plays the Jets and the Dolphins in December games that will decide the pecking order for next year's draft. They also play the two-win Cleveland Browns twice in the final month, so there's a chance for some good feelings at the end.

But there's still a long way to go, and the issues that brought them to 0-6 aren't getting resolved.

An ineffective offensive line can't open holes for the running game. The defense can't stop the run. And neither problem is getting any better. Quarterback Lamar Jackson outrushed the Bengals 152 yards to 33 on Sunday. Joe Mixon and Giovani Bernard combined for 14 yards on 12 carries, one week after Kyler Murray ran for 93 yards and the Bengals managed only 108 on the ground.

And the misery goes on.

"This will be the toughest stretch we'll ever experience," first-year coach Zac Taylor said.

Not much. The only encouraging trend is that they've shown resilience as the losses mount. They scored a pair of touchdowns in the closing minutes of a loss to the Cardinals that tied the game. They put together their only touchdown drive late in Baltimore. They're just not good enough to be competitive for an entire game.

The running game tops a long list of areas in need of significant improvement. The Bengals' inability to run the ball is at the root of their problems. Andy Dalton has been forced to throw far more than he'd like because of the lack of a running game. While the defense has been bad, the offense's inability to get first downs and stay on the field has exacerbated the problems.

Second-year receiver Auden Tate had a breakout game, catching five passes — one more than he had all last season — for a team-leading 91 yards. He had several diving catches. Tate had been primarily a target near the goal line because of his long reach and 6-foot-5 frame, but his performance Sunday was a step toward a much bigger role in the offense.

Defensive end Carlos Dunlap sat out with a knee injury suffered in practice last week, the first time since 2013 that he didn't start a game. Dunlap is having a subpar season with only one sack, 19 tackles and no passes batted down — his specialty. The knee injury is another setback to a line that's been unable to stop the run or get much pressure on the passer.

Cornerback Dre Kirkpatrick hurt his left knee in the first quarter and was getting an exam. Right guard John Miller suffered a groin injury and is doubtful for a game Sunday against Jacksonville. There's no plan yet for how much receiver A.J. Green will practice this week as he continues to recover from an ankle injury in training camp. Cornerback Darqueze Dennard can resume practicing this week on a roster exemption as he recovers from arthroscopic knee surgery in March. Defensive end Kerry Wynn went on injured reserve Monday with a concussion, and rookie offensive lineman Fred Johnson was acquired off waivers from Pittsburgh.

3 — The number of times the Bengals have allowed at least 250 yards rushing in a game this season. San Francisco had 259, Arizona 266 and Baltimore 269. Buffalo also had a big game, running for 175 yards.

Get Green healthy. Oh, and win a game.