Browns trade up to pick ND's Owusu-Koramoah in NFL draft 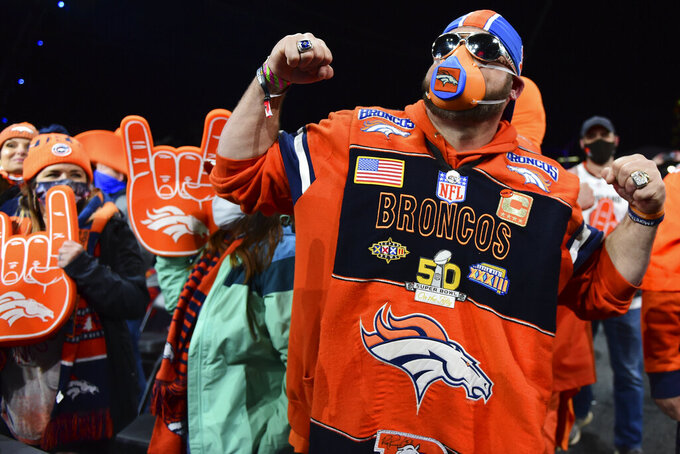 Denver Broncos fans react during the third round of the NFL football draft Friday, April 30, 2021, in Cleveland. (AP Photo/David Dermer)

CLEVELAND (AP) — Jeremiah Owusu-Koramoah was dropping quickly in the second round of the NFL draft, much faster than the Browns ever expected.

And as he got closer and closer, the team's anxiety level rose dramatically.

“We probably had a building of 30 people all pacing together,” general manager Andrew Berry said, laughing.

They went from pacing to pouncing.

Afraid the do-everything Notre Dame linebacker might get taken before it was their turn, the Browns traded with Carolina and moved up seven spots to select Osuwu-Koramoah with the No. 52 overall pick on Friday night.

Cleveland dealt the No. 59 pick and one of its two third-round selections (No. 89) to the Panthers to get Owusu-Koramoah, who had been projected to go in the first round and may have been bypassed because he's undersized.

“We certainly didn’t expect him to be there when he was,” Berry said. "But we’re fortunate that he was and we think he’s going to add something to our team.”

As the second round unfolded, the Browns, who have spent the offseason overhauling their defense, couldn't believe Owusu-Koramoah was in their range,

"We were pretty happy,” DePodesta said. “There was a lot of pacing going on upstairs once we got to about pick 42, 43, 44, just trying to figure out if there was a way we could make it happen. So we were very excited about this.”

He may be only 6-foot-1, but Owusu-Koramoah made plays all over the field for the Fighting Irish. He can rush the passer, cover receivers and make tackles from sideline to sideline. Owusu-Koramoah had 142 tackles and seven sacks in two seasons.

“We really do see him as the classic fit in this defense at Will (weakside) linebacker because of his range, speed and coverage ability," Berry said. “The other thing with Jeremiah is his versatility as well. They really walked him out as a nickel or dime, played him at Will, played him at Mike (middle) and so that allows us to get creative when we get into some of our personnel packages.”

In the third round, the Browns added more offensive speed in Auburn wide receiver Anthony Schwartz, selecting him 91st.

The pick was announced on stage by Browns All-Pro defensive end Myles Garrett, whose muscles threatened to tear apart his suit jacket as he led the crowd in “Here we go, Brownies” chants.

After Odell Beckham Jr. and Jojo Natson suffered season-ending injuries in 2020, the Browns lacked a burner able to stretch defenses vertically and Schwartz should help fix that.

“Every time I get the ball I’m going to score, and it doesn’t matter how I’m going to do it,” Schwartz said. "I’m either going to run through you, run around you or I’m gonna just burn you. That’s been my thing ever since I started playing football.”

Owusu-Koramoah was thrilled when he got the call from the Browns, knowing they wanted him badly and how he can impact the defense.

“I told my mom I am about to go outside and run on the beach, maybe run a mile or two,” he said on a Zoom call from Virginia. "The coaches have a great system, a system that is not based off of perfection and guys that need to just be all structure.

“The system is really a structured system that allows you to fly around and make plays."

The 21-year-old is the latest addition to Cleveland's defense, which has been almost completely remade this offseason through free agency and this draft.

The Browns also received the No. 113 pick in the deal with Carolina.

Owusu-Koramoah's speed should allow the Browns to line him up at several positions, but the team envisions him primarily as a linebacker.

On Thursday night, with Cleveland at center stage as host of this year's draft, the Browns drafted Newsome, an ultra-confident 20-year-old who is expected to compete for a starting job with Greedy Williams this summer.

After he was picked, Newsome was contacted by Williams, who continues to recover from a nerve injury in his shoulder that kept him out last season.

“That just tells you who Greedy is as a person,” Newsome said on a Zoom call. "I don’t know him, but he’s a guy who just wants the best for the team. He’ll do whatever he can do for the team to win and that’s definitely somebody I want to connect to.”

The Browns will head into Saturday's final day with six more selections, including three in the fourth round.