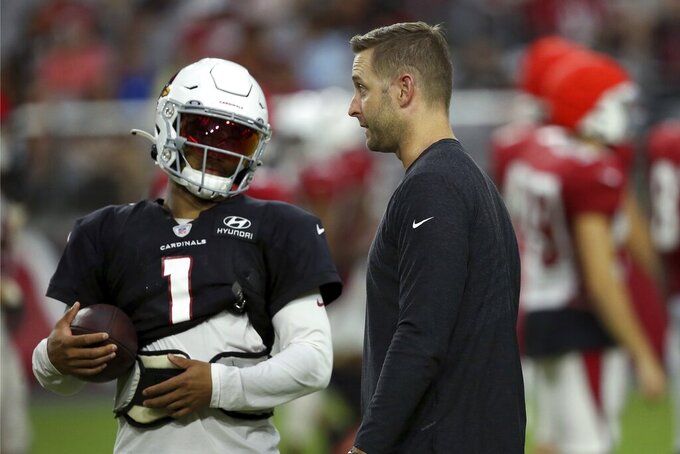 But this year is different because of the NFL debut of Kyler Murray. The No. 1 overall choice in this year's draft is set to face an opponent for the first time Thursday night.

He isn't likely to play much against the Los Angeles Chargers, and the Cardinals won't show much of the offense of new head coach Kliff Kingsbury.

Murray, who will turn 22 on Wednesday, admitted it will be odd to play a game that doesn't count, other than getting ready for the regular season.

"I'm looking forward to having fun," Murray said Tuesday. "It's going to be different suiting up in a Cardinals jersey. Not playing for a school, you're representing a state."

Kingsbury has a specific number of snaps in mind for Murray, but added that playing time could be adjusted depending on how the game is going. Murray just doesn't want to make his coach look bad for Kingsbury's 40th birthday, which is Friday.

"Not to say we're going to feel great when he comes out of the game, but you'd like him to have a positive outlook and have accomplished what we've set out to do, and that's execute our offense and control what we can control at that position," Kingsbury said. "I'm sure he'll be more amped than nervous. He's a competitor and he gets the butterflies just like everyone else. He loves when the lights are on."

"I feel like the players are anxious to go against somebody else, and it's that point in camp," Kingsbury said. "Seeing one color jersey for a long time throughout offseason, throughout training camp and now guys are excited to compete against another team."

Murray's backup, Brett Hundley, was asked what the Cardinals offense will look like when Murray is allowed to run it in full.

"Get your popcorn ready and watch. It'll be fun," Hundley said.

NOTES: Marcus Gilbert, who tops the initial team depth chart at right tackle, was injured in Monday's practice but Kingsbury called it a minor groin tweak. Gilbert didn't practice Tuesday. ... TE Ricky Seals-Jones had a hand examined Monday but participated in Tuesday's practice. ... The Cardinals had veteran receiver Michael Crabtree in for a workout this week but opted not to sign him. Still, Kingsbury kept the door open for possibly bringing in the veteran. "Anything can happen," Kingsbury said. "He's a talented player and has been very successful in this league, and so we'll see where that goes." ... Arizona governor Doug Ducey attended practice, watching from the sideline while speaking with Cardinals president Michael Bidwill.