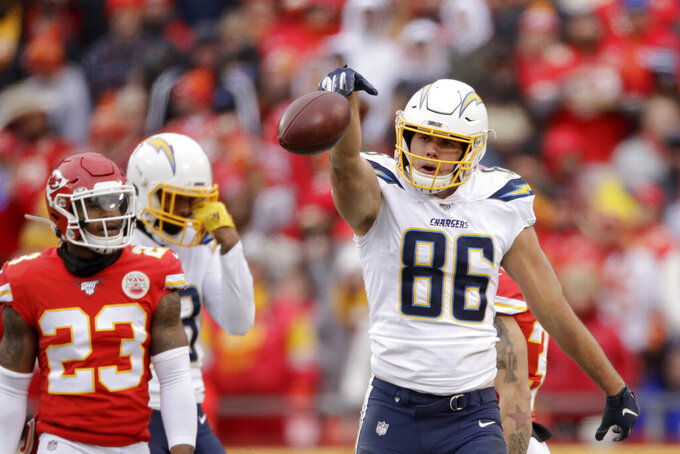 FILE - In this Dec. 29, 2019, file photo, Los Angeles Chargers tight end Hunter Henry (86) celebrates a catch as Kansas City Chiefs safety Armani Watts (23) watches during the second half of an NFL football game in Kansas City, Mo. Henry has signed his franchise tag with the Chargers, but the tight end remains optimistic that a long-term extension can still be reached. Henry said during a conference call on Wednesday, April 29, that both sides made progress before things were put on pause for draft preparations. (AP Photo/Charlie Riedel, File)

COSTA MESA, Calif. (AP) — Hunter Henry has already signed his franchise tag with the Los Angeles Chargers and the tight end remains optimistic that a long-term extension can still be reached.

Henry said during a conference call on Wednesday that both sides made progress before things were put on pause for draft preparations.

The Chargers must sign Henry to an extension by July 15, or else he would play the upcoming season on a one-year deal worth $11.1 million.

“There are other guys that need to be signed too. We'll continue to talk especially as we get closer to the deadline,” Henry said.

The Chargers have $21.9 million remaining in salary cap room according to the NFL Players Association, which is ninth-most in the league.

Henry set career highs with 55 receptions and 652 yards despite missing four games with a knee injury. His five touchdowns were tied for seventh among NFL tight ends.

Coach Anthony Lynn says he considers Henry to be one of the better tight ends in the league because he can both catch and block.

The biggest difference for Henry this season is that he won't be catching passes from Philip Rivers, who signed with Indianapolis after 16 seasons with the Chargers.

Henry is close friends with Rivers, who had the locker next to him for most of his first four seasons.

Henry said he didn't discuss Rivers' future with him, but there was a feeling toward the end of last year that Rivers wouldn't be back.

“I didn’t want to pay attention to it too much. We knew we were out of the playoff race and you could hear it more. It was just weird,” Henry said.

“I wasn’t a fan of it because Philip is my guy. It was sad seeing him run off the last time not knowing the future.”

Henry though is excited about how the offense might evolve, whether it is Tyrod Taylor or Justin Herbert at quarterback. He envisions more play action and a more mobile quarterback, which should help receivers buy time on routes. Henry said he texted Herbert shortly after he was taken as the sixth overall pick in last week's NFL draft.

When Henry will get a chance to work with Taylor or Herbert though remains undetermined. Team complexes are shut down indefinitely and it remains increasingly likely the first workout for many squads won't be until training camp.

The Chargers are among many teams doing virtual classroom meeting sessions for their offseason programs because of the coronavirus pandemic.

Henry has remained in Southern California and is doing some workouts while adhering to social distancing guidelines.

Henry said he is hopeful that he can start working out with Taylor soon in order to start building that camaraderie and chemistry, even if it means working further apart and having to shout instructions at times.

“I have pretty high confidence that we are going to have a season. We have four months until games are supposed to start to figure it out,” he said. “I'm open to playing games without fans for awhile and then hopefully things will get better.”