Colts try to turn tables on Steelers dominance in series 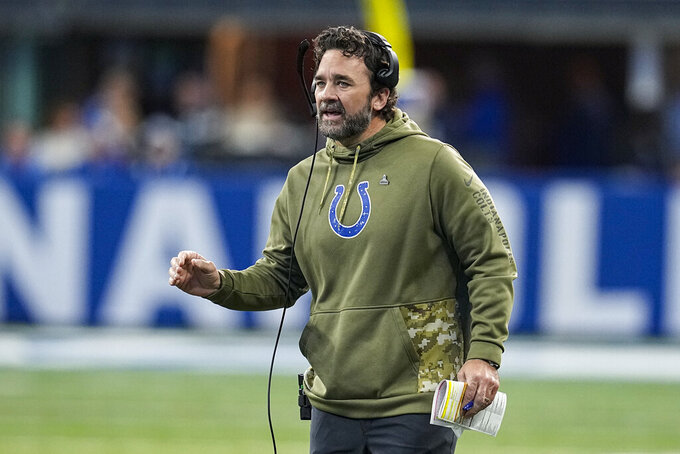 Indianapolis Colts head coach Jeff Saturday on the sideline in the second half of an NFL football game against the Philadelphia Eagles in Indianapolis, Fla., Sunday, Nov. 20, 2022. (AP Photo/Darron Cummings) 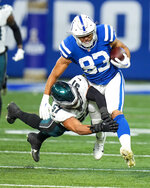 The Indianapolis Colts have lost seven straight to the Pittsburgh Steelers since last winning 14 years ago — when Saturday was still in the prime of his playing career.

And if Indy hopes to change anything in this lopsided series, he understands the Colts must be more focused, more precise and more efficient Monday night.

“We talked about just embracing the moment, having fun with it, appreciating it and then performing at your best when you have these moments and opportunities,” he said. “It's a huge challenge, and, obviously, Pittsburgh brings its own set of battles here."

For the Colts (4-6-1), winning this one is a must if they hope to revitalize their rapidly fading playoff hopes. They've lost their past two home games — both 17-16 after the defense gave up a touchdown in the final 90 seconds and the offense couldn't move into field-goal position.

Another agonizing loss to the Steelers could spell doom again for longtime Colts fans who have seen Pittsburgh repeatedly dashed their dreams.

Whether it was the incomplete desperation pass that sent the Steelers to the Super Bowl and the Colts home in January 1996, the playoff-eliminating 42-14 rout the next season or Ben Roethlisberger's shoestring tackle on Nick Harper's fumble return and Mike Vanderjagt's shanked 46-yard field goal with 17 seconds left that sealed a 21-18 divisional round win over the top-seeded Colts in January 2006, nobody in town has forgotten.

This time, of course, the Steelers (3-7) seem vulnerable. They've lost three of four overall, four straight on the road and rookie quarterback Kenny Pickett has struggled with interceptions with his Monday night debut looming.

Similar to Indy, Pittsburgh has struggled to produce points and even its usually stout run defense has been susceptible this season.

Coach Mike Tomlin realizes that's a potential problem against 2021 NFL rushing champ Jonathan Taylor up next, even with defending NFL Defensive Player of the Year T.J. Watt back from an injury.

“We haven’t been in a stadium with him before, but we respect his talents and his resume,” Tomlin said. “We believe quality play, for them, centers around his exploits and what he’s able to do. We’ve got to minimize his impact on the game.”

Taylor has rushed for 231 yards and two scores since Saturday replaced Frank Reich and Saturday seems more committed to the ground game.

Could it be enough to help Indy turn the tables against one of the NFL's most successful franchises on Monday night? Saturday hopes so.

“They’re all must wins,” he said. “When you’re staring at where we are and trying to make a push. ... Again, the process matters and the way that we are going about it matters. The wins will take care of themselves. We’ve just got to make sure we’re taking care of the process.”

Indy will wear uniforms that were first used in 1956 when Pittsburgh native Johnny Unitas was a rookie with the then-Baltimore Colts and Indiana native Weeb Ewbank was the coach.

Diontae Johnson was a Pro Bowler a year ago. Now the fourth-year receiver has become nearly invisible, particularly since Pickett replaced Mitch Trubisky at halftime in Week 4. Johnson's targets, receptions and yards per reception all decreased with Pickett. He's averaging 8.9 yards per catch this season and hasn't scored a TD since last January's win over Cleveland.

Tomlin points to Johnson's resume as one reason he's essentially become a decoy, saying opponents are game-planning to stop him.

Maybe, but Johnson —- who signed a two-year contract extension in August — seems to be running out of patience.

When Colts quarterback Matt Ryan has played this season, he's largely been pursuing another icon with Pittsburgh ties, Hall of Famer Dan Marino, who played in college at Pitt.

Ryan passed Marino for seventh on the league's career list for yards passing on Oct. 16 and surpassed the former Miami Dolphins star for No. 6 in career attempts last week. Now Ryan, who grew up near Philadelphia, can tie Marino's mark for comebacks with a fifth late-game rally this season. Marino is fifth with 47.

After weeks of sputtering, Pittsburgh's ground game has taken a significant step forward. The Steelers have averaged 154 yards rushing over the past three weeks, up from 87.8 yards in their first seven games.

Running back Najee Harris has 189 yards in the past two games, quelling any discussion of undrafted rookie free agent Jaylen Warren making a serious bid to start. Tomlin credited the offensive line's improvement and more decisiveness from Harris as two key components to helping alleviate some of the burden on Pickett.