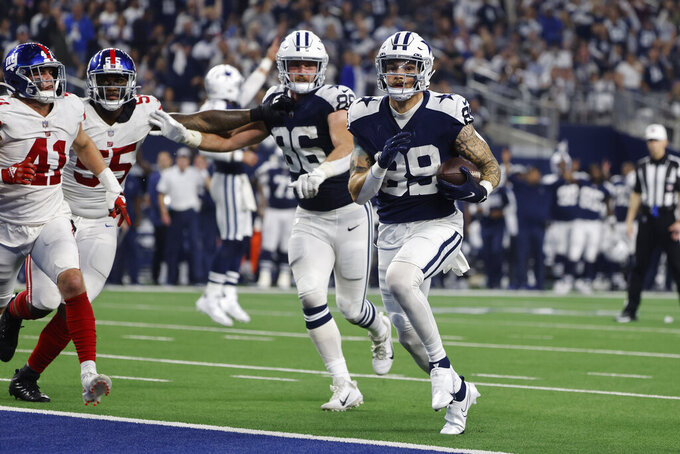 ARLINGTON, Texas (AP) — That hurdle over a defender in the open field was just an instinctive move for Jake Ferguson. That unique celebration with the other three Dallas Cowboys tight ends after a touchdown a few plays later was a scheme he had come up with in advance.

And it was Ferguson who got bopped on the head in a live-version Whac-A-Mole celebration in the Cowboys' 28-20 win on Thanksgiving Day, in another knock for the New York Giants in a once-promising season that seems to be unraveling with three losses in the last four games.

After rookie Peyton Hendershot scored on a 2-yard sweep, cutting in behind the blocks of two other tight ends to get into the end zone, he immediately motioned the rest of his group toward one of the oversized Salvation Army red kettles in the back of the end zone.

“We just saw the kettle and we were just brainstorming in the tight end room, like what can we do,” Ferguson said. "What about if all three of us in there, and we just play Whac-A-Mole. Because we knew Peyton had that play in for a couple of weeks, and we knew he was going to get into there and we’d have an opportunity.”

Dalton Schultz, Sean McKeon and Ferguson all jumped into kettle, then started popping up and down before Hendershot used the football like a mallet, holding it with both hands whacking Ferguson on top of the head.

“If all four tight ends are in there, we’re going to score a touchdown, we’ve got to do something special,” Hendershot said. "When they called (the play), we knew it was time to go.”

Schultz said he honestly didn't know if three tight ends would fit in the kettle together.

“I didn’t know that it was squishy either, so I was a little happy about that,” Schultz said.

That was the last score for the Cowboys in their annual Thanksgiving game that also serves as the kickoff for the Salvation Army's holiday fundraiser.

While the tight ends weren't the first ones to use the kettles as part of a touchdown celebration, they did it as a group. Running back Ezekiel Elliott once dropped money and himself in the big red bucket, and another time picked up Dak Prescott and put the quarterback in one.

“They topped me. They topped my kettle celebrations," Elliott said. “I’m a little jealous. You know they didn’t let me in on it, but love those tight ends.”

It was a celebration that wouldn't have even happened if the Cowboys had won their challenge of the previous play, when CeeDee Lamb made an incredible catch in the back of the end zone. Coach Mike McCarthy challenged after Lamb was ruled out of bounds, and that call was upheld after replay review.

A few plays before that, Ferguson leaped into the air to make a two-handed catch on what turned into a 30-yard gain to the Giants 24. After the open-field catch near the 45, he took off and went hurdling over 6-foot safety Jason Pinnock close to the 30, then got a few more yards before lowering his shoulder into cornerback Rodarius Williams.

“Cleared somebody? Never,” Ferguson said about the hurdle. "That probably will be the last time I jump this year because now guys will be going high, sets them up a little bit. But yeah, I don’t really know how to explain that one.”

As for putting his head down, and bulling into Williams, Ferguson said, "My legs might have been a little tired.”