Deshaun Watson practicing, not talking ahead of Browns debut 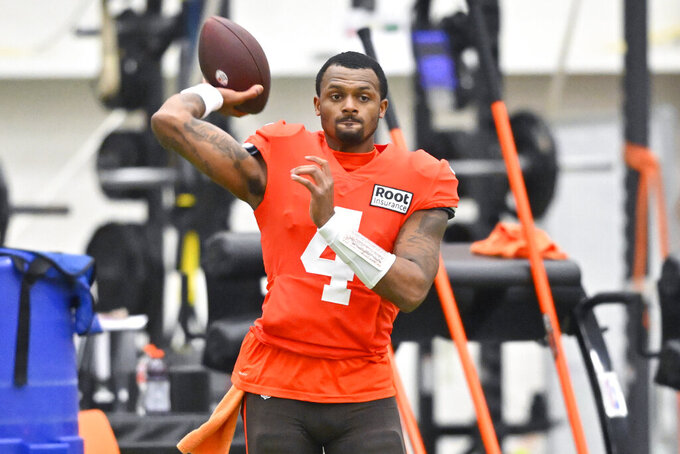 “There he goes right now if you want to flip the camera on him,” Koramoah said.

Watson chose to stay to the side and quiet.

He's ready to play, not talk.

Cleveland's new starting quarterback didn't address the media Wednesday before practicing for the first time since being reinstated by the NFL from his 11-game suspension for alleged sexual misconduct.

Watson, who has been accused by more than two dozen women of harassment and assault during massage therapy sessions while he played for Houston, is set to make his debut Sunday for the Browns against the Texans. The Texans drafted him in 2017 before he demanded a trade after four seasons and was eventually dealt to Cleveland in March.

Watson looked sharp Wednesday while getting his first starter's reps since training camp as the Browns stayed out of the cold by working out indoors — similar to the conditions they'll have in Houston's NRG Stadium.

"We’ve been waiting a long time for him to come back,” running back Nick Chubb said.

Watson's return has been scheduled since August, when the 27-year-old accepted the lengthy suspension, a $5 million fine and agreed to undergo mandatory therapy and counseling after an independent arbitrator ruled he violated the league's personal conduct policy.

He was cleared last month to attend meetings and work out in the team's facility, and Watson has been practicing since Nov. 16.

Now that he's the starter, Watson is obligated to speak to the media, but that hasn't happened yet. Typically, Cleveland's starting quarterback speaks on Wednesday before Sunday games. That's been the case with Jacoby Brissett all season.

However, Watson didn't address reporters from the portable podium, and spent time sitting in his chair wearing headphones and checking his phone during the 45 minutes the locker room was open.

The Browns did not provide any reason for Watson not speaking. When asked why Watson wasn't available, Browns coach Kevin Stefanski said: “That’s not my department,” redirecting the question to the team's media relations director.

It's possible Watson will answer questions in the next few days. The last time he conducted a group interview, he continued to insist he had done nothing wrong.

While he stayed silent, a few of his teammates said Watson's return has brought a spark to the Browns (4-7), who have had a disappointing season to this point but are clinging to brittle playoff hopes.

“He's special, a playmaker,” said Chubb. "He puts the ball exactly where he needs it to go. Guys like that. Guys are excited. We all are. We're ready.”

Watson's legal trouble has overshadowed his talent. He led the league with 4,823 yards passing in the 2020 season, which was followed by him demanding a trade and the damaging accusations.

He has settled 23 lawsuits filed by women who said Watson exposed himself, touched them or kissed them against their will. Two other lawsuits remaining pending. Two grand juries in Texas declined to indict him on criminal charges.

On Tuesday, attorney Tony Buzbee, who represents most of the women who sued Watson, said about 10 of them plan to attend Sunday’s game. Buzbee said the women intend to make a statement that “we matter.”

When he returns to the field, Watson will be playing in his first regular-season game in 700 days. The three-time Pro Bowler could have some rust from the long layoff, and a shaky stint in his one exhibition appearance (1 of 5 for seven yards) raised questions about whether his legal issues have taken a toll.

Stefanski dismissed emotion as a distraction or factor.

“I think a lot of that was just getting back in uniform, in the huddle, hearing my voice in the headset and those type of things,” he said. "That was all about the preparation. I don’t put much stock on that.”

NOTES: Browns All-Pro DE Myles Garrett didn't practice so he could get more rest for his sprained left shoulder, which he injured in a car crash on Sept. 26. Garrett had 1 1/2 sacks in Sunday's win over Tampa Bay. ... Chubb, WR Amari Cooper, LG Joel Bitonio and DE Jadeveon Clowney also got a day off. ... TE David Njoku (knee) was the only notable starter not on the field due to injury. ... CB Greg Newsome (concussion) could be back this week after missing two games.