Dolphins owner: There definitely will be an NFL season 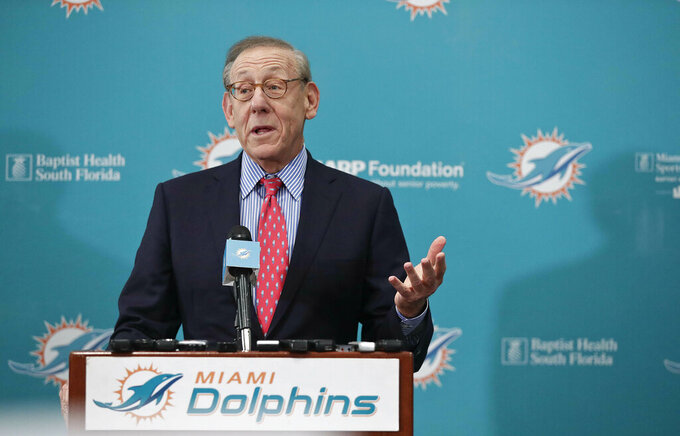 FILE - In this Feb. 4, 2019, file photo, Miami Dolphin's owner Stephen Ross speaks during a news conference in Davie, Fla. Ross says he's confident the NFL will play in 2020, with or without spectators. “I think there definitely will be a football season this year,” Ross said Tuesday, May 26, 2020, during an interview on CNBC. “The real question is will there be fans in the stadiums?"(AP Photo/Brynn Anderson, File)

MIAMI (AP) — Miami Dolphins owner Stephen Ross says he's confident the NFL will play in 2020, with or without spectators.

“I think there definitely will be a football season this year,” Ross said Tuesday during an interview on CNBC. “The real question is will there be fans in the stadiums?"

The NFL has said it expects to play a full schedule beginning Sept. 10, but is preparing contingency plans in case the coronavirus pandemic makes venue changes or games without fans necessary.

“Right now, today, we’re planning on having some fans in the stadiums,” Ross said. “But I think the NFL is very flexible so that we will be able to start on time and bring that entertainment that is really so needed to all of us in this country.”

The league has kept to its offseason schedule of conducting free agency, the draft and the release of the schedule. Some teams reopened training complexes on a limited basis last week.

The NBA, NHL and MLB have been idled by the pandemic.

"One thing we miss is our sports,” Ross said. “I don’t think a lot of people realize it until they no longer have it. Certainly the NFL, I think, will be ready to go. I know we’re all looking forward to it. I know I am.”

Earlier this month, the Dolphins said their stadium committed to becoming the first to receive accreditation from a cleaning industry association for infectious disease prevention efforts. CEO Tom Garfinkel said the team is considering social distancing proposals for games, and perhaps limiting crowds to 15,000.

“We’ve done a lot of things down in Miami," Ross said. “We’re prepared either way, and hopefully there will be fans in the stadiums."

Ross, a New York real estate developer and chairman of Related Companies, said the hotel and retail industries are being hit hardest by the pandemic.

“You are going to have such a flood of cases going to the bankruptcy court,” Ross said.