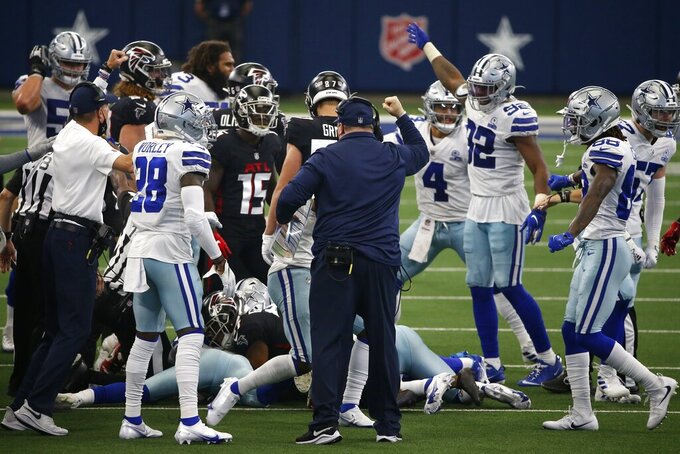 ATLANTA (AP) — The Atlanta Falcons are still searching for answers following their epic collapse in Dallas.

Despite holding a 20-point lead in the first quarter and still up by 15 with about five minutes remaining, the Falcons managed to lose a game that was theirs to win.

They botched the fielding of an onside kick even after coach Dan Quinn called a timeout to bring everyone to the sideline to go over what was coming. Their defense gave up 570 yards and allowed four touchdowns in the second half. The rushing attack couldn't break off a big run. The Falcons could only watch helplessly as Greg Zuerlein kicked a 46-yard winning field goal as time expired in a 40-39 loss.

Quinn said his team routinely practices various onside kick scenarios, but the Falcons clearly expected a high bouncing kick. They weren’t prepared when Zuerlein didn’t use a tee to send the ball skidding past three Atlanta players who could’ve fallen on it at any point and essentially end the game.

Quinn found himself yelling at the screen as he watched a replay Monday of Olamide Zaccheaus, Sharrod Neasman and Hayden Hurst letting the ball roll past them, apparently thinking it needed to go 10 yards before they could touch it.

“Usually two types of onside kicks take place,” Quinn said. “One that’s a high bouncer or one if you don’t use a tee can be a low roller to go, so certainly the players know the rule. I know there was some talk regarding that, but if you think it’s going to go out of bounds or not make it to the 10, to the restraining line, that’s an option to back off, but when the moment comes to be aggressive for the ball, you always take that moment.

“When it got close to the line, we like to say go aggressive and get on it. Take your chance to go finish it off. When we didn’t do that, that’s disappointing for us.”

The Falcons (0-2) insist the season is far from over. Quarterback Matt Ryan and receiver Julio Jones both said there’s plenty of time to correct mistakes and get in the NFC South race. But with Chicago visiting Mercedes-Benz Stadium on Sunday, they’re in danger of hopelessly falling behind — and it’s only September.

“It has to be the execution, the consistency from the first snap all the way through the final play,” Quinn said. “To me, that was the message I was getting across to them as we were going through things today. No more tale of two halves.”

Ryan threw for a modest 273 yards but had four touchdowns, overseeing an offense that racked up 39 points and played well enough to win. Atlanta had a balanced attack of 34 rushing attempts and 37 passes, though the commitment to the ground game didn’t exactly work out. The Falcons gained just 3.3 yards per carry and had four attempts stopped for no gain or minus yardage.

The defense forced four fumbles in the first quarter, recovering three, but had no takeaways the rest of the way.

Atlanta was helpless on defense after the first quarter. Seven plays covered at least 20 yards and three of them went for 37, 38 and 58. It was alarming how easily the Cowboys moved the ball in the third quarter to get back in the game, needing just 2:37 and 2:47 to score two touchdowns and trim the lead to 29-24.

Todd Gurley averaged 2.9 yards on 21 attempts, his longest run covering 8 yards. The lack of a consistent rushing attack cost the Falcons a chance to run out the clock in the fourth quarter.

Defensive end Takk McKinley (groin), right tackle Kaleb McGary (knee), safety Ricardo Allen (elbow) and linebacker Foye Oluokun (hamstring) left the game and did not return. All four are starters, which puts pressure on the team’s depth. Quinn said none of the injuries appears to be serious.

2 — How many catches Jones had as he battled throughout the day with a sore hamstring that limited him in practice last week. Jones indicated the hamstring hindered him on a deep, would-be touchdown pass that he dropped.

Last year’s team lost the opener and won its second game before riding a six-game losing streak into the bye week. That ended the playoff chances and the Falcons finished an empty 7-9. This year’s club is in a must-win situation entering Week 3. It will be imperative for Atlanta’s defense to force some three-and-outs and get off the field. The running game needs to be more consistent.