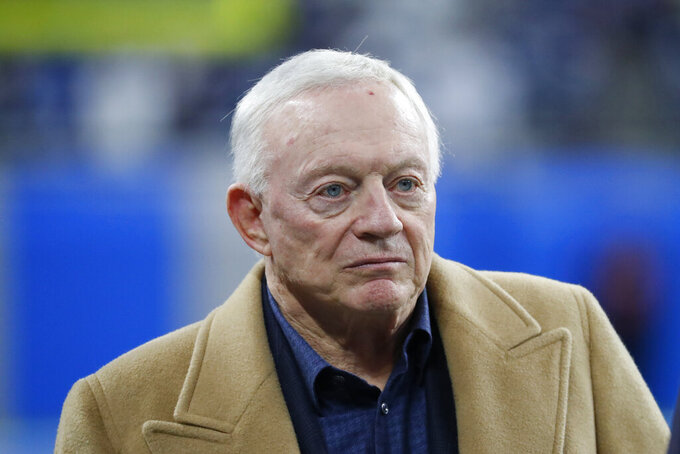 FILE - In this Nov. 17, 2019, file photo, Dallas Cowboys owner and general manager Jerry Jones waits for the team's NFL football game against the Detroit Lions in Detroit. Jones sidestepped the question of whether he would change his policy requiring players for the Cowboys to stand during the national anthem. Still, the owner who has taken the hardest line among his NFL counterparts against protesting racial injustice during “The Star-Spangled Banner” did acknowledge a changing social tide after the killing of George Floyd by police in Minneapolis. (AP Photo/Paul Sancya, File)

Jerry Jones sidestepped the question of whether he would change his policy requiring Dallas Cowboys players to stand during the national anthem.

Still, the owner who has taken the hardest line among his NFL counterparts against protesting racial injustice during “The Star-Spangled Banner” did acknowledge a changing social tide after the death of George Floyd at the hands of Minneapolis police.

Two years ago, Jones wouldn't even support players staying in the locker room during the national anthem, declaring the club's policy was for players to be on the sideline, “toe on the line."

While he reiterated his belief in standing for the anthem in his annual pre-training camp meeting with reporters this week, Jones tried to say he intended to be more open to the points of view of players.

Jones was the first owner to suggest he might bench players over kneeling for the anthem. That was 2017, when the issue flared over comments from President Donald Trump a year after Colin Kaepernick first knelt to call attention to issues of racial injustice.

With more players kneeling in response to Trump three years ago, Jones joined players and coaches as the Cowboys locked arms and knelt before the anthem on a Monday night in Arizona. Everyone stood before the anthem was played.

The Cowboys are in a similar situation now, with star quarterback Dak Prescott saying “conversations are heating up” over what the team will do with players and coaches kneeling during the anthem in other pro leagues, most notably the NBA.

Prescott pledged $1 million toward police training after Floyd, a Black man, died when a white police officer pressed his knee against Floyd's neck for nearly eight minutes in May. He said he was “disgusted and unsettled” by Floyd's death.

While Prescott said two years ago he didn't think the anthem was the right time for such a protest, he said he would support teammates who kneel.

“We have the choice to do as we please, whether to kneel or believe in this religion or that religion, to come from this background and still make it, come from this economic deal or be burdened by oppression and still overcome it,” Prescott said. “I support life and I support the good in people.”

Defensive tackles Dontari Poe and Gerald McCoy signed with Dallas as free agents in the offseason, and both questioned why Jones didn't speak sooner after Floyd's death and Commissioner Roger Goodell's acknowledgment that the NFL erred in its resistance to peaceful protests by players.

Jones said he hasn't talked directly to Poe and McCoy, but expected to do that while talking to other players as well.

“Am I interested in what everybody has to say about any issue? You bet,” Jones said. “And I have rabbit ears. I really do. Having said that, I am listening. The point is, we will do it in a way we think is a sensitive and has as much grace for the genuine feelings of everybody in mind.”

Jones said the key word was “grace” amid the changing social environment that includes the country's battle to contain the coronavirus.

“I’m going to show grace,” Jones said. “And I’d like to show that kind of grace on a sensitive matter. Everybody is genuine here. I’m giving everyone the benefit of the doubt relative to any decision that I make.”

Jones' tone indicated quite a bit more wiggle room compared to “toe on the line.”

By Josh Dubow 38 minutes ago
By Teresa M. Walker 4 hrs ago
6 hrs ago
By Arnie Stapleton 4 hrs ago
By Steve Megargee 6 hrs ago