Jets totally overwhelmed by the Eagles in 31-6 loss 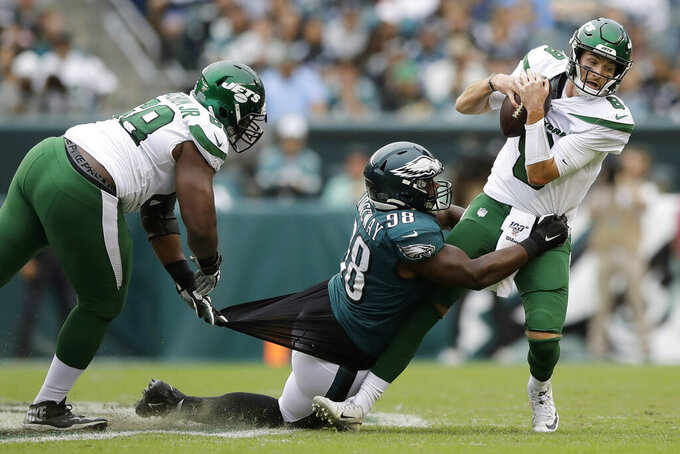 Nothing the Jets tried against the Philadelphia Eagles worked.

With Sam Darnold missing his third straight game, the Jets were undermanned and overwhelmed in a 31-6 loss Sunday.

Luke Falk made his second start after opening the season on the practice squad and looked unprepared. He didn't take snaps with the starters until Friday because the Jets were hoping Darnold would get cleared to play. Darnold is recovering from mononucleosis.

"I'm not going to make any excuses," Falk said about not getting many reps in practice. "I've got to go out there and perform better than I did. I was getting mental reps all week and I've got to do the best with what I've got. Control the controllable and I felt like we had a few things early on and if we just converted on some things then it's a different ballgame. I've been saying that for the last three weeks now. We've got to go out and actually do it now."

"I don't think that was the reason we had an issue," Gase said.

The Jets (0-4) couldn't keep Philadelphia's defense off Falk. He was sacked nine times and David Fales, who was re-signed on Friday, also got sacked after Falk left to be evaluated for a concussion. He cleared protocol.

"You have to be able to protect the quarterback in this league, and that's just the bottom line," Jets center Ryan Kalil said. "For us, it's about going to work and fixing the things we have to fix. A lot of it is technique, and that's what we have to do. ... People just want to see us get it done, and nobody wants to see us get it done more than we do in this locker room."

Falk threw a pick-6 in the first quarter, and another interception late in the second quarter that led to Philadelphia scoring to take a 21-0 halftime lead.

"We just have to get on the same page on what we're doing," Falk said.

Bell ran for 43 yards on 15 carries and is averaging only 2.9 yards per carry in his first season in New York. He didn't have much room to run, even when a mammoth blocker led the way. The two-time All-Pro also caught seven passes for 45 yards.

The Jets are hopeful Darnold and linebacker C.J. Mosley can return next Sunday against Dallas. Mosley also hasn't played since Week 1 because of a groin injury.

"That, obviously, is going to help us a lot," Gase said. "We have to make sure we understand when we know what a team is going to try to do to us, that we go out and do a better job of finishing plays the way we need to finish them."

Gase said he's not certain if Darnold will have medical tests on Monday. Doctors have been monitoring Darnold's spleen, which became enlarged, a common symptom of mononucleosis. A swollen spleen could rupture — a potentially life-threatening situation — if the area takes a hit, leading to the caution with which the doctors and team are using for the 22-year-old franchise quarterback.

The Jets avoided a shutout after Corey Clement muffed a punt and Trenton Cannon recovered at the Eagles 19.

Vyncint Smith scored on an end-around on the next play, but the 2-point conversion failed. That was New York's second offensive touchdown this season and first since Week 1, ending a drought of 12 quarters.