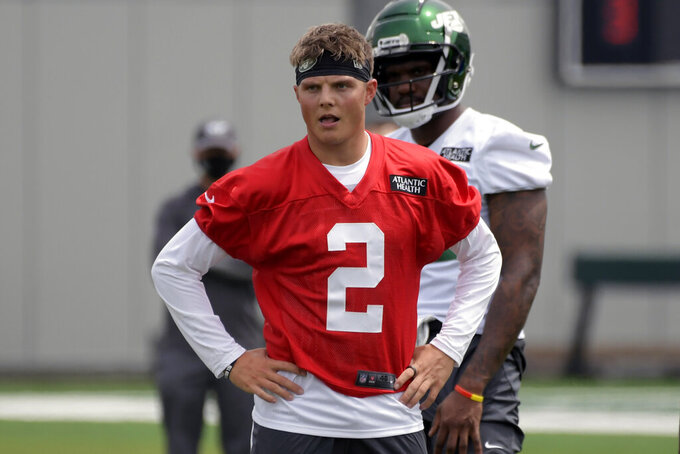 FILE - New York Jets first round draft pick Zach Wilson (2) works out during NFL football rookie camp in Florham Park, N.J., in this Friday, May 7, 2021, file photo. The franchise has been on a mostly fruitless search since Joe Namath last played for the Jets in 1976, an often frustrating span during which 34 players have started at quarterback for New York. Zach Wilson, the No. 2 overall pick in April, will likely become No. 35 when the Jets kick off the regular season at Carolina on Sept. 12.(AP Photo/Bill Kostroun, File)

Can the Jets' quarterback — whoever that happens to be — become the next Broadway Joe?

The franchise has been on a mostly fruitless search since Namath last played for the Jets in 1976, a span during which 34 players have started at quarterback for New York. Zach Wilson, the No. 2 overall pick in April, will likely become No. 35 when the Jets kick off the regular season at Carolina on Sept. 12.

But until someone — and New York hopes it will someday be Wilson — leads the franchise back to the Super Bowl for the first time since it won its only title in 1969, Namath will continue to be the measuring stick for every Jets QB.

“Well, I’m thankful,” the 78-year-old Pro Football Hall of Famer said in a telephone interview with The Associated Press. “I thank God every day, several times, for my health, my family, my family’s health. And for the Jets fans, man, it’s about a championship. I happened to be on a team that answered the challenge and we got it done. Yes, I happened to be the guy that handled the ball a lot and I’m flattered whenever they remember that. But we did it together. We won a championship.

“And these fans deserve a championship.”

They certainly have waited a long time for another one. They'd first like to see the Jets at least make the playoffs and snap a 10-season drought that is the longest active skid in the NFL.

New York thought it had its quarterback for the next 10 or 15 years when it traded up and drafted Sam Darnold No. 3 overall in 2018. That dream faded just three years later when the Jets dealt him to the Panthers. It also cleared the way for New York to take Wilson, who's the latest to be anointed the next — maybe, possibly, hopefully — Namath.

“I'm looking forward to meeting Zach,” Namath said. “I haven’t had the pleasure of meeting and talking with him, so it’s hard to try to evaluate someone without sitting down and visiting with them, talking and seeing how they operate, listening to them, exchanging verbiage.

“But to me, what I've watched of him on tape or on television, oh yeah, man, he’s an athlete. He makes the throws, he moves around. A gifted athlete.”

The man who made the most famous guarantee in sports history wasn't about to make any bold declarations about Wilson, though. Namath knows the former BYU star will have plenty of pressure on him.

So, when asked what advice he might share with Wilson, Namath knew exactly what he'd tell him.

“It wouldn’t be any negativity about being in New York or in that market,” he said. “It would be: Get your mind on the team, on the plan and learn as much about the offense and as much about the opposing defense. Just eat, drink and sleep football until you are absolutely convinced you’re ready for anything you’re confronted with on that field.”

Wilson has earned rave reviews from his teammates, coaches and even owner Woody Johnson for his work ethic and desire to study film and the playbook. Namath acknowledged that's a good start, but added that the Jets becoming consistent winners will take more than just Wilson.

“It all still comes down to a team game,” Namath said.

Namath has kept close tabs on the Jets over the years and has been rooting for them to return to respectability.

“There was a lot of room to improve talent-wise,” Namath said. “We’re only going to be able to see with the results, but I think Joe Douglas knows what he’s doing and I’m excited for the future for this team.”

Douglas was hired as the Jets' general manager in June 2019 after helping build winners in Baltimore and Philadelphia. Namath has met and talked football with Douglas and likes most of the calls he has made in New York — and understands the decision to part ways with Darnold.

“Sam Darnold is a wonderful young man,” Namath said. “He’s going to play 15 years if he doesn’t get hurt — he’s that good. The team took to him, he was a leader in the locker room. But I really believe that Sam’s moving on, it worked out that way as part of a new coaching system coming in, a new quarterback and starting fresh.”

Namath is pumped up by new coach Robert Saleh's energy and passion. He believes that has gone a long way toward changing the mood around the franchise from downtrodden to positive — along with the arrival of a young quarterback he hopes can finally lift the Jets back to where only he has brought them.

“Joe Douglas has put something together, I really believe that,” Namath said. “We have a lot of optimism now. And I say ‘we’ because I am a fan, too. I’m one of them, one of the many that have endured some losing seasons. But, yes, man, we have reason to be really optimistic.”