Rams, Saints clash with both trying to save their seasons 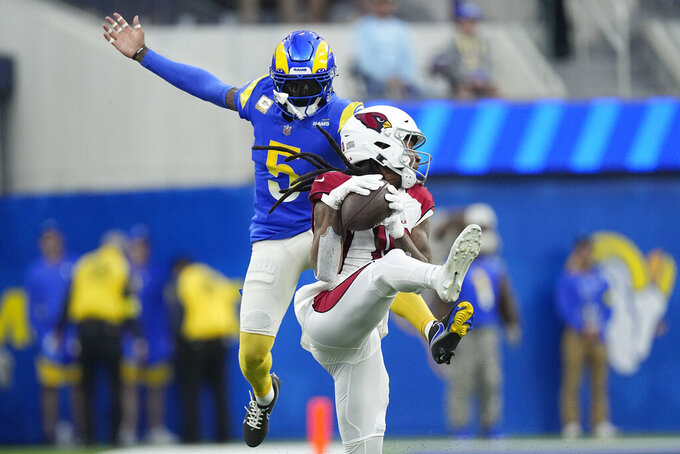 TURNOVER DIFFERENTIAL: Rams minus-7; Saints minus-12.

RAMS PLAYER TO WATCH: CB Jalen Ramsey. Los Angeles’ All-Pro pass defender is having another standout season despite diminishing talent around him. The Rams could desperately use more takeaways after managing only eight this season, and Ramsey should have his chances against the Saints, whose quarterbacks have combined for 12 interceptions this season.

SAINTS PLAYER TO WATCH: Rookie WR Chris Olave, the 11th overall draft choice last spring, continues to be among the Saints' most productive offensive players. He leads the club with 46 catches for 658 yards to go with two TDs receiving.

KEY MATCHUP: Ramsey is likely to match up against Olave, upon whom the Saints have relied more heavily than expected this season because of injuries to veteran Michael Thomas and Jarvis Landry.

SERIES NOTES: The Rams have won three of the past four meetings, including their matchup in the NFC championship game in the Superdome in the 2018-19 season. That game was marked by what the NFL later said was a failure by officials to call pass interference or a helmet-to-helmet hit against a Rams defender near the goal line late in the fourth quarter. The correct call would have greatly enhanced New Orleans' chances of winning. New Orleans won the previous regular-season meeting in the Superdome earlier in November 2018.

STATS AND STUFF: Los Angeles has lost five of its past six games. The Rams are three games under .500 for the first time in six seasons under coach Sean McVay, who had never had a losing record at any point before this year. ... Kupp, last season's Super Bowl MVP, sprained his ankle last week against Arizona. He is second in the NFL with 75 catches and fifth with 812 yards receiving and six TDs. ... Los Angeles will have two new starting offensive linemen in the injury absences of Jackson and Brewer. ... Tyler Higbee, the Rams’ second-leading pass catcher, needs two touchdowns to become the Rams’ career TDs leader among tight ends. ... Stafford’s next passing TD will be his 50th with the Rams. ... Los Angeles is 31st in the NFL in yards per game (282.7), 29th in points (16.4) and last in yards rushing (68.1). ... Darrell Henderson is the Rams’ leading rusher with a paltry 274 yards. Cam Akers, who was kept away from the team for three weeks during a dispute with the coaching staff, is averaging 2.8 yards per carry. Los Angeles has high hopes for rookie RB Kyren Williams, who returned last week after a seven-game injury absence. ... Seven-time All-Pro DT Aaron Donald leads the Rams with 31 pressures and five sacks. ... LB Bobby Wagner is having an outstanding first season with his hometown Rams, leading the team with 73 tackles. ... The Rams have committed an NFL-low 37 penalties, and only Cincinnati has accumulated fewer than their 337 penalty yards. ... Saints QB Andy Dalton has six TDs and two INTs in five home starts (including a designated home game in London) this season. ... RB Alvin Kamara has at least five catches and 100-plus scrimmage yards in four of his past five home games. ... Olave leads all rookies in receptions with 46 and yards receiving with 658. ... TE Juwan Johnson led New Orleans with five receptions and had his team-high fourth TD receiving of the season last week. Johnson has TD catches in two straight games and is one of four tight ends with at least four TD catches in each of past two seasons. ... DE Cameron Jordan has 111 1/2 sacks since 2012, second most in the NFL since then. ... LB Demario Davis has a tackle for loss in seven of his past eight games. ... DT David Onyemata has a sack in three straight games. ... CB P.J. Williams led New Orleans with a career-high 11 tackles last week.

FANTASY TIP: The versatile Kamara is due for strong performance after a relatively quiet past two games and his ability to participate in both the running and receiving games should give him opportunities against the Rams.