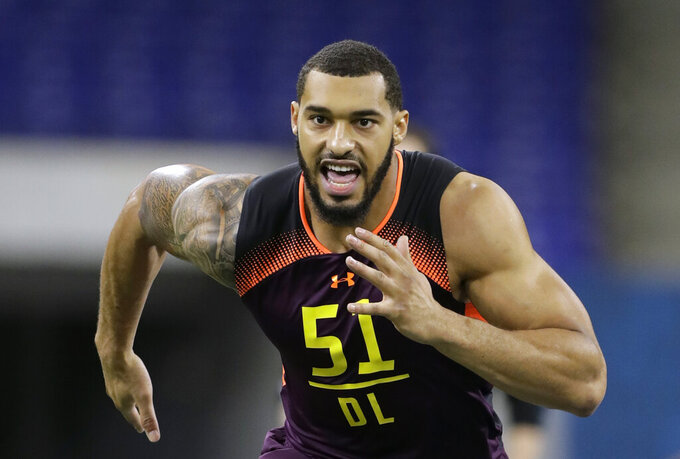 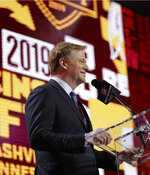 ASHBURN, Va. (AP) — Dwayne Haskins met Dan Snyder's son in high school in suburban Washington, and it began the path to being drafted by the Redskins.

Snyder and team President Bruce Allen had their sights set on the Ohio State standout leading up to the NFL draft and didn't even have to trade up to get him, getting someone they hope will be their quarterback of the future by taking Haskins with the 15th pick Thursday night.

"It's just crazy how small this world is and how you meet somebody and that can change your life," Haskins said. "I've got to do all I can to make sure that I leave a lasting impression on people. I think that's (why) Mr. Snyder thought that I was the guy for this franchise."

Born in New Jersey, Haskins and his family moved to Potomac, Maryland, before high school. He got to know Snyder's son at the Bullis School and met the Redskins' owner during the draft process.

The Redskins did move up to fill another need late in the first round, trading up to No. 26 and selecting edge rusher Montez Sweat out of Mississippi State. They sent their second-round pick, 46th overall, and a 2020 second-rounder to the Indianapolis Colts to get back into the first round.

There was plenty of internal debate within the front office about whether Washington should go quarterback at No. 15 because there are so many other needs, and coach Jay Gruden said there was talk of moving up for Haskins or taking Sweat there. The Redskins have to wait until the third round, where they have the 76th and 96th overall picks, to fill holes at wide receiver, tight end, guard and in the secondary.

"We can go a lot of different ways, really," Gruden said.

Haskins joins a crowded roster at QB with injured veteran Alex Smith, longtime backup Colt McCoy and trade acquisition Case Keenum. Smith is expected to miss the entire 2019 season after breaking his right leg in November. Gruden is not ruling out Haskins competing for the starting job right away.

"If you're a 15th pick in the draft, I think you have to give him an opportunity, without a doubt," Gruden said. "We feel good about the guys that we have in the building, for sure, but when you take a guy in the first round at any time, you're going to have to give him a chance to compete."

Haskins only started one NCAA season but threw for a Big Ten record 4,831 yards and 50 touchdowns, had just eight interceptions and rushed for four scores as a redshirt sophomore. He led the Buckeyes to a Big Ten title and a 13-1 season and is confident that lack of experience won't hurt him.

"I feel like I showed all I could as far as one year," Haskins. "I broke a lot of records and did a lot of great things. I feel like I did a lot of stuff that showed that I can be able to translate to the NFL. Just being able to do what I did at a high level, it was the right choice for me to make that change to go to the pros. I'm grateful the Redskins thought so, as well."

Haskins was the third quarterback taken in the draft after the Arizona Cardinals took Oklahoma's Kyler Murray first overall and the Redskins' NFC East rival New York Giants selected Duke's Daniel Jones with the sixth pick. Haskins said of the Giants, "I'm just looking forward to being able to compete against those guys for the rest of my career."

As soon as the Miami Dolphins passed on Haskins and took Clemson defensive tackle Christian Wilkins, Haskins said he knew he was going to the Redskins.

Haskins, family members and friends watched the draft at a bowling alley and sports bar in Gaithersburg, Maryland, about 30 miles from the Redskins' practice facility. The Redskins went with a quarterback in the first round for the first time since 2012, when they traded up to get Robert Griffin III with the second pick.

Haskins attended a couple of Redskins home games at FedEx Field when Griffin was the starter. Now he's succeeding him as the latest hope to get them back to on-field relevancy after missing the playoffs the past three seasons and nine of the past 11.

Sweat fills a void for Washington after pass-rusher Preston Smith left for Green Bay in free agency. He slipped amid medical concerns about a heart condition that he said was misdiagnosed and then called normal by Houston Texans doctor James Muntz.

Gruden said the Redskins believe Sweat is healthy, and they have a motivated player in their second first-round pick.

"They definitely got a winner in me," Sweat said. "I'm more motivated than ever."