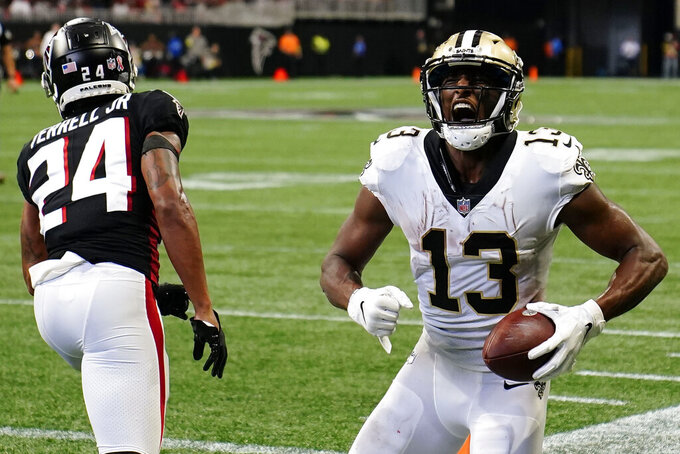 ATLANTA (AP) — Arthur Smith gets downright snippy if anyone tries to bring up the past in Atlanta.

Yet this sure looks like the same ol' Falcons.

Smith's team opened the season Sunday by squandering a 16-point lead in the fourth quarter and losing to the New Orleans Saints 27-26.

Of course, the Falcons are the team that will forever be known for blowing a 28-3 lead in the Super Bowl following the 2016 season.

Just since the start of the 2020 season, the Falcons have frittered away fourth-quarter leads of at least 15 points three times. According to NFL.com, the other 31 teams combined have done that only two times over the same time frame.

“Write what you want,” Smith barked to reporters. “You buried us in May. Bury us again. We don’t care.”

The second-year coach wasn't around for that epic Super Bowl meltdown. Neither were most of his players.

But this performance was a pretty good replica.

The Falcons were up 23-10 in the third quarter and appeared on the verge of putting New Orleans away until new quarterback Marcus Mariota fumbled inside the 5, ruining a potential first-and-goal.

Atlanta was still in good shape when Younghoe Koo booted his fourth field goal with 12:41 remaining to push the lead to 26-10.

To that point, the Falcons' defense had limited the Saints to a mere 172 yards. Jameis Winston was struggling to get anything going, passing for just 56 yards while being sacked four times.

Suddenly, after being forced into a no-huddle, hurry-up offense, the Saints could do no wrong.

Winston completed 13 of 15 for 213 yards and two touchdowns over New Orleans' final three possessions — and one of the incompletions was a spike to stop the clock so Wil Lutz could come on to kick a game-winning, 51-yard field goal with 19 seconds remaining.

“It does leave a bitter taste in your mouth. Hopefully it will be motivation going to the next week,” Falcons linebacker Rashaan Evans said. “We’ve just got to finish stronger.”

A familiar refrain in Atlanta.

The Falcons got good production out of their ground game. Cordarrelle Patterson rushed for 120 yards on 22 carries, and Mariota (12 carries, 72 yards) provided the sort of mobility this team hasn't had at quarterback since Michael Vick.

Smith and Patterson gave credit to a revamped offensive line. “We’ve got an edge we want to play with up front, and for the most part I thought we played with that edge,” the coach said.

The Falcons also looked better on the other side of the line, where they are led by longtime stalwart Grady Jarrett. Atlanta's four sacks were its most since the next-to-last game of the 2020 season.

The Falcons were not very dynamic in the passing game. Mariota completed 20 of 33 but accounted for only 215 yards, an average of 6.5 yards per attempt.

The Saints did a good job shutting down Pro Bowl tight end Kyle Pitts, who was targeted seven times but made just two catches for 19 yards. Even so, Smith said Pitts had a big impact on the game with his blocking and drawing extra coverage.

WR Drake London. The first-round draft pick played only one possession in the preseason before sustaining a knee injury, but he looked right at home in his NFL debut. The rookie led the Falcons with five receptions for 74 yards, including a 31-yard play.

CB A.J. Terrell. Rated as one of the league's top coverage corners, Terrell gave up both of the Saints' fourth-quarter touchdown passes while defending Michael Thomas. That was a tough assignment, to be sure, but the Falcons need Terrell to do a better job of locking down top receivers.

RB Damien Williams left in the early going with a rib injury, which forced Patterson to carry the bulk of the running load. CB Casey Hayward was helped to the sideline late in the game, but it wasn't anything serious.

1-7 — The Falcons' record at Mercedes-Benz Stadium since Smith took over as coach. He made it a priority to build more of a home-field advantage this season, but that goal is off to a rocky start. Since the stadium opened in 2017, the Falcons are 15-25 in front of the home folks.

The Falcons knew this was a rebuilding year after dealing longtime quarterback Matt Ryan and taking a huge salary cap hit. A win over the Saints could've built some good vibes. Instead, the Falcons already are reeling as they head into a brutal stretch over the next six weeks that includes three of the four teams that reached last season's conference championship games, plus Tom Brady and the Buccaneers.

It begins with this Sunday's game at the reigning Super Bowl champion Los Angeles Rams.