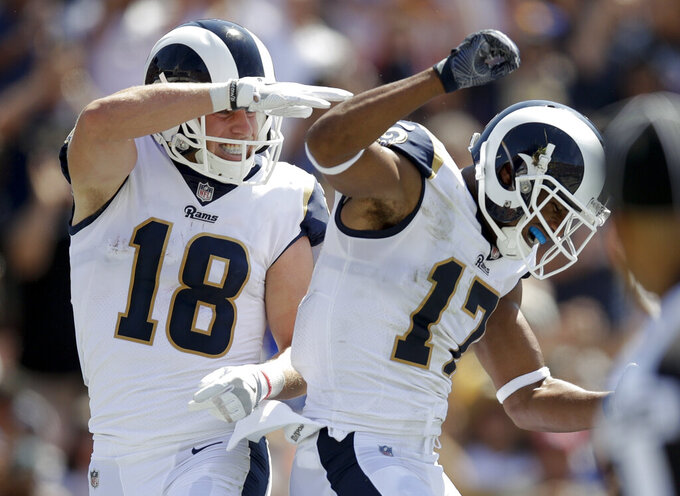 FILE - In this Sept. 10, 2017, file photo, Los Angeles Rams wide receiver Cooper Kupp, left, celebrates his touchdown with wide receiver Robert Woods during the first half of an NFL football game against the Indianapolis Colts in Los Angeles. Kupp and Woods spent the offseason getting kicked off various high school football fields while trying to get in some COVID-clandestine workouts. (AP Photo/Jae C. Hong, File)

LOS ANGELES (AP) — Robert Woods spent his workdays during this bizarre NFL offseason sneaking over fences and through unlocked doors onto the fields and tracks of various Los Angeles-area high schools.

“You might see a gate open, so you hop on the track and get your work in,” Woods said. “The next day you may see somebody watching you on the track and they’ll say, ‘Hey, what are you doing out here?’ and then find ways to get you off the track. Next thing you know, you’re shooting texts around trying to find another available track.”

Woods did some of that sneaky work with Cooper Kupp, his fellow 1,000-yard receiver with the Los Angeles Rams. These COVID-clandestine workouts with Jared Goff and other Rams were both unusual and entertaining.

“The regimen really consisted of getting kicked off just about every field here in Thousand Oaks, which was fun," Kupp said. “If I jumped the fence, I wasn’t supposed to be out there, probably. I just feel like as long as I’m not putting anyone in danger, I was going to ... ask for forgiveness instead of permission.”

Being star receivers for the Rams didn't help much in the time of coronavirus, not when the team's training complex was off limits and high schools weren't interested in knowingly hosting celebrity workouts.

“It worked for Day One, but it went above to somebody, and they got us kicked off,” Woods said with a laugh.

Woods and Kupp are one of the NFL's most prolific and most reliable pass-catching duos of the past three seasons, but the steady receivers are about to get attention that often missed them.

With their crisp route-running, sure hands and consistent play, Woods and Kupp both had at least 90 catches and 1,100 yards receiving last season, relentlessly racking up numbers in coach Sean McVay's offense.

After running back Todd Gurley's release and receiver Brandin Cooks' departure in a trade by the cost-cutting Rams during the offseason, Woods and Kupp are likely to shoulder extra work and responsibility in the fall. They're approaching it with the same workmanlike attitude that got them to where they are.

“I think we’re not like the flashiest group of receivers,” said Woods, the first Rams receiver to post back-to-back 1,000-yard seasons since Torry Holt in 2007.

“But we’re just up there with production — up there with the best, if not the best," Woods added. "That’s the biggest goal of our whole receiving corps, not only to do what we did last year, but to be even more dominant in the passing game and the running game, to make bigger plays. You know, we break a few tackles, but we want to break them all.”

They also don't have to do an enormous amount of learning this year: The 28-year-old Woods and the 27-year-old Kupp are heading into their fourth seasons in coach Sean McVay’s offense, and that familiarity makes everything easier.

“We’ve got such a good rapport at this point, we’re getting to the point where you don’t really have to talk to each other,” said Goff, who has been McVay's quarterback for all four years. “You kind of just look at each other and you know what each other are thinking.”

Woods and Kupp will have help, too. Josh Reynolds is back after three seasons spent largely as the Rams' fourth receiver, although he stepped up when Kupp went down with a season-ending knee injury in 2018, eventually making three catches in the Super Bowl.

The Rams also drafted Florida product Van Jefferson in the second round, proving that this franchise definitely loves a certain type of receiver.

Jefferson's smooth speed, precise route-running and sure hands led to innumerable pre-draft comparisons to none other than Woods and Kupp. General manager Les Snead touted the comparison moments after drafting Jefferson, who had described both veterans as role models for his NFL career even before he knew he would be playing alongside them.

Jefferson showed up early in the Thousand Oaks area and participated in some of those not-so-secret Rams workouts, picking the veteran wideouts' brains for info. McVay is pleased to see Woods and Kupp stepping up to take a new level of responsibility in his offense.

“Watching those two and their communication amongst one another or with Jared, it’s really impressive,” McVay said. "In some instances, it’s good as a coach where you can just step back and let them take that autonomy and ownership, because it’s certainly earned.”