Steelers' Highsmith back in mix with NFL's top pass rush 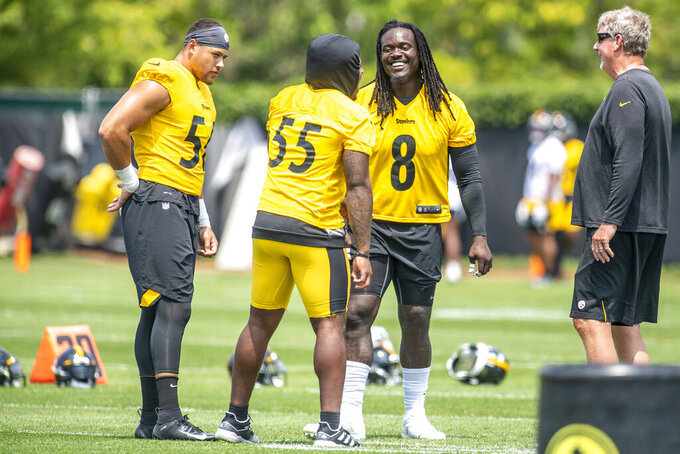 He’s also excited to be back in the mix with the NFL’s top-ranked pass rush.

Highsmith closed the 2020 season opposite T.J. Watt as the Steelers’ starting right outside linebacker. This season, Highsmith will compete for additional playing time on the right side with newly signed veteran outside linebacker Melvin Ingram.

“All three of us, we’re definitely going to be a force to be reckoned with,” Highsmith said. “I’m going to have a starting mindset, of course, but whatever role I have is the role that I want to play. My role is to be the best player I can be for this team.”

Watt and Bud Dupree formed one of the top pass-rushing tandems in 2020 as the Steelers led the league in sacks for the fourth consecutive season. Dupree tore his ACL midway through the season and then signed with Tennessee in free agency, while Watt finished as runner-up to Rams tackle Aaron Donald for the NFL’s Defensive Player of the Year award.

Highsmith, the Steelers’ third-round pick in 2020, took over on the right side after Dupree’s injury. He played in all 16 games and started the last five, making 42 tackles, five tackles for loss, a pair of sacks, six quarterback hits and an interception.

“The last five or six games we had together gave us a real good look at how we jell together and the things we can improve on collectively,” Watt said. “I’m excited to get to work with Alex again.”

Highsmith will also have an opportunity to work with Ingram, who signed with Pittsburgh a week before training camp. The 32-year-old Ingram, a three-time Pro Bowler, spent the previous nine seasons with the Chargers, where he ranks No. 4 in team history with 49 sacks.

“I’m really excited for the pass rush we’re going to have this year,” Highsmith said. “Last year, we had packages where all three of us were on the field, so I’m excited to work in some of those packages, as well, this year. Melvin has been a guy I’ve been able to learn from. He’s a veteran Pro Bowl guy and we were all excited when we brought him in.”

The Steelers are also excited about Highsmith’s development.

Highsmith was a standout during the team’s first practice in pads on Wednesday. He displayed a power rush and a smooth spin move during backs on backers, a one-on-one drill in which a running back attempts to stop a blitzing linebacker. Highsmith also shook off a pair of blocks for consecutive tackles in the backfield during a live 11-on-11 run drill.

“I think he has a great repertoire of moves already, just coming off his rookie year,” Watt said. “It’s a matter of being more consistent for both of us. That’s the biggest challenge of being an NFL football player, being consistent week in and week out. Anybody can have a great game, it’s about putting together great weeks and seasons.”

Highsmith said he felt more comfortable as he progressed through his rookie year, particularly his final five games as a starter.

“I felt the more and more I played, the slower the game got for me,” Highsmith said. “That’s what I’m excited for this year because I know the more reps I get, and the more I play, the more the game will slow down for me.”

“I try to be a student of the game all the time,” Highsmith said. “I feel that’s something that separates the good from the great in this game. Everybody here has talent, but the guys who are great are smart mentally and have a great IQ.”

Highsmith hopes that’s enough to put him over the edge as he seeks a breakout second season with the Steelers.

“I feel like I’m only going to get better from here on out, so that’s the mindset and confidence I have going into this year,” Highsmith said. “I know I had a great offseason, and I do expect to make less mistakes this year. I put in the work and I’m excited to give my all to this team this year.”