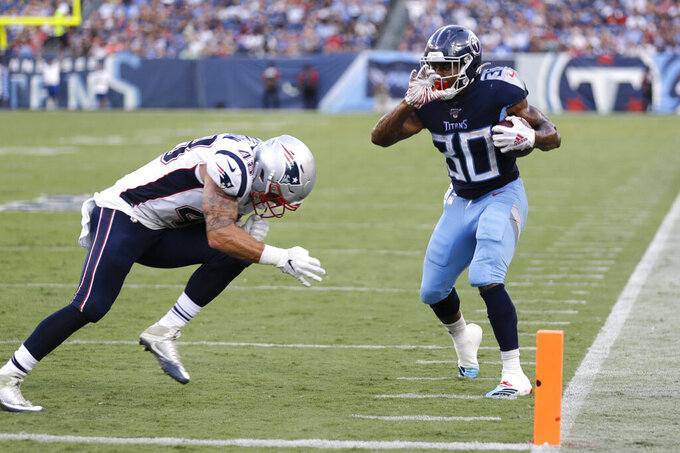 Tennessee Titans running back Jeremy McNichols (30) scores a touchdown as he is defended by New England Patriots linebacker Calvin Munson (48) in the first half of a preseason NFL football game Saturday, Aug. 17, 2019, in Nashville, Tenn. (AP Photo/James Kenney) 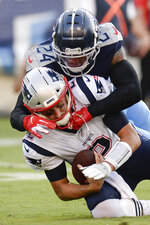 NASHVILLE, Tenn. (AP) — Marcus Mariota jumped into the air and flipped over Patriots cornerback Duron Harmon into the end zone for a 2-point conversion.

In a preseason game nearly eight months after the Titans quarterback couldn't play in Tennessee's regular-season finale because of nerve injuries. Mariota scored, then went to the bench for an earful from teammates.

"They told me not to do it again," Mariota said.

Rookie Jarrett Stidham rallied the New England Patriots to a 22-17 victory over the Titans on Saturday night, throwing a 23-yard touchdown pass to Damoun Patterson with 4:12 left to cap another big performance off the bench.

Stidham picked up where he left off in his previous trip to Nissan Stadium. Stidham had five TD passes here helping Auburn rout Purdue in the Music City Bowl last December. This time the rookie was 14 of 19 for 193 yards helping the Patriots (2-0) come back from a 17-8 halftime deficit showing why New England drafted him in the fourth round in April.

"Stidham has a good arm," Patriots coach Bill Belichick said. "I think he throws the ball accurately. I think he has shown that all the way through from Baylor to Auburn to his pro day and his spring workouts, so I do really think that has been the issue."

Two days of practices against the Titans was enough for Belichick to let Tom Brady watch a second straight exhibition game with New England's options at wide receiver thin because of injuries.

Mariota started for the Titans (1-1) and shook off a pair of three-and-outs before his best drive this preseason. He capped a 10-play, 87-yard drive with an 11-yard TD pass to his favorite target, three-time Pro Bowl tight end Delanie Walker, who broke his right ankle in the 2018 season opener.

Coach Mike Vrabel let Mariota go for 2 against his old team. Mariota looked to throw, then ran to the end zone before going into the air and flipping over Harmon for an 8-0 lead. Mariota was 6 of 9 for 63 yards passing.

Brian Hoyer's first offensive series ended quickly. Logan Ryan, the former Patriots cornerback, stepped in front of receiver Braxton Berrios for an interception. Hoyer was 6 of 8 for 55 yards. Stidham bounced back after his first play ended up in a safety after a holding penalty on the Patriots.

"He performed well," Patriots receiver Dontrelle Inman said of Stidham. "He's a young kid and has a lot to learn. But he's picking up things well in this league."

Brandon Bolden and Nick Brossette each ran for a TD for the Patriots.

Ryan Tannehill, added in a trade from Miami in March to upgrade the Titans' backup quarterback, was 7 of 11 for 84 yards with a TD pass and a sack. Logan Woodside took over just before halftime and finished the game.

Julian Edelman didn't play as he recovers from an injured thumb, and neither did Phillip Dorsett, N'Keal Harry — the Patriots' first-round draft pick nor Cameron Meredith. The Patriots started Inman and rookie Gunner Olszewski, an undrafted free agent from Division II Bemidji State.

The receiver can rejoin the Patriots on Sunday after the NFL conditionally reinstated the receiver Friday night after suspending him indefinitely in December 2018 for violating the league's substance abuse policy. Belichick issued a statement Saturday before kickoff that Gordon's situation has been a league matter. He declined to comment after the game when asked if the Patriots would get a roster exemption for Gordon.

"When Josh returns to our program, we will evaluate the entire situation and do what we feel is best for Josh and the team," Belichick said in his statement.

Mariota wasn't the only member of the Titans to flip into the end zone. Jeremy McNichols flipped into the end zone after catching a swing pass and going 15 yards. Mariota gave McNichols' flip a higher grade than his own.