Titans eager to start streaking, Bills get Josh Allen back 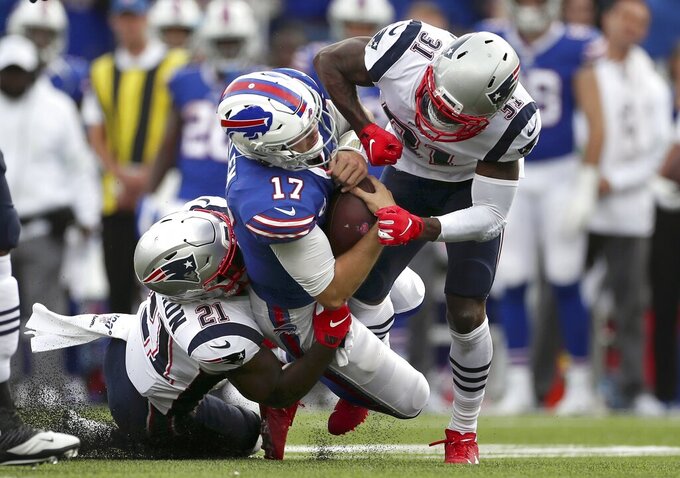 NASHVILLE, Tenn. (AP) — The Tennessee Titans have been searching for consistency for far too long, and they believe three of the next four games at home is a chance to put together a winning streak.

"We really need to get on a run," Titans safety Kevin Byard said. "There's a whole lot of teams in the NFL that's 3-1, 2-2, 1-3 or whatever. But we have to be that team that breaks out of the pack. I think if we can try to get on a run here, I think we'll put ourselves in great shape for the postseason."

The Titans (2-2) can start their first winning streak of the season Sunday when they host the Buffalo Bills (3-1), who announced Saturday that Josh Allen cleared the concussion protocol and is expected to play.

Allen was hurt following a helmet-to-helmet hit early in the fourth quarter of a 16-10 loss to New England last weekend. He was a limited participant in practice Wednesday and Thursday before practicing fully on Friday, when Buffalo listed his playing status as questionable. He has rallied the Bills from deficits in each of their three victories this season.

"Josh is a competitor," Bills left tackle Dion Dawkins said. "Like sometimes Josh is Josh. And of course, we all say, 'Josh, just get down, da, da, da, da, just get down.' But Josh is one of those dudes that fights for every inch."

The Titans are coming off a 24-10 win in Atlanta, and they also get three-time Pro Bowl left tackle Taylor Lewan back. This is a rematch of a 13-12 loss to the Bills in Buffalo last year and certainly didn't help as the Titans lost a playoff berth in their regular-season finale.

Some things to watch in a series where the past three games were decided by a single point:

The Titans are fourth in the NFL giving up just 15.5 points a game, while the Bills rank fifth allowing 15.8 points a game. Neither defense has allowed an opponent to score more than 20 points in a game this season, making them two of only five NFL teams to be so stingy.

For the Titans, this is the longest streak since 2008 for a defense that returned nine of 11 starters from 2018. Buffalo has 10 of 11 starters back from the defense that allowed the fewest yards in the NFL last year, and the Bills haven't allowed a completion of 50 yards or longer in 31 games.

Coach Mike Vrabel isn't happy that his Titans have fumbled eight times this season, yet they've lost only one for the fewest turnovers in the NFL. Marcus Mariota also is the only quarterback to start every game this season without giving the ball away. He has thrown a franchise-record 169 straight passes without being intercepted going back to last season, which is also the longest active streak in the NFL.

Ball security has been a big problem for the Bills, who are tied for the league worst with 10 turnovers and seven interceptions. Allen has been intercepted six times and lost two fumbles. Backup Matt Barkley was intercepted once, sealing the Bills' loss last week. That's slowed down an offense that ranks ninth in piling up 387.3 yards a game but is tied for 23rd in scoring with 19 points a game.

Bills running back Frank Gore, 36, needs 249 yards to pass Barry Sanders for third on the NFL's career rushing list, and he became the league's second-oldest player to top 100 yards rushing in a game last week with 109 yards. That also made him only the fourth player to top 15,000 yards for a career.

"We got to make sure he ain't doing it this week," Titans four-time Pro Bowl defensive tackle Jurrell Casey said.

The four-game suspension is over for Lewan, but Vrabel says the Titans will monitor the left tackle to make sure he's ready to play a full game. Lewan worked out during his suspension at Vanderbilt and thanked coaches for helping keep him in shape. Now he has to make sure he's not too hyped up when going against Bills defensive end Jerry Hughes, which Lewan said means he'll have his plate full in his return.