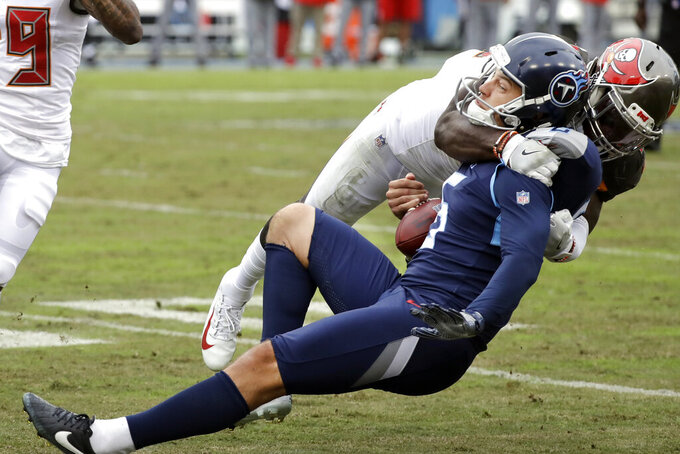 NASHVILLE, Tenn. (AP) — The Tennessee Titans have had a lot of luck and some very stingy defense winning two straight games to claw their way back to .500.

That won't be nearly enough with the NFL calendar turning to November.

"We have to continue to work," Titans coach Mike Vrabel said. "We've got it back to even. We've got our heads above water. We're right at the edge of the water. We have to do everything we can to take the next step. That's always about making corrections, understanding situations, coaching them and trying to get as healthy as we possibly can."

The Titans won a week ago with a goal-line stand helped by replay reviews overturning a trio of calls on the field inside the final minute all in favor of Tennessee. A whistle on a fake punt kept Tampa Bay from returning a fumble by Brett Kern for a touchdown as Tennessee won 27-23.

Now the Titans have the league's third-toughest schedule down the stretch based on current records. They also play in the AFC South — the only division where every team is .500 or better.

"November is really when the NFL season begins, and we're in a position to do something with that going forward," Vrabel said Monday.

Defense remains the Titans' calling card with Tennessee ranked fourth, giving up only 16.9 points a game. They have eight interceptions and are tied for second in the NFL with a plus-7 turnover margin. The Titans also have won each of the past two games with big stops, the latest stopping Tampa Bay short on fourth-and-1 just after the two-minute warning.

Yet allowing a season high in points left the Titans mad at themselves.

"Our standard is too high," safety Kenny Vaccaro said. "I mean, the turnovers are great, we knew we had a chance to get those. A lot of people ... got turnovers, so that wasn't special. What would have been special would have been holding their numbers down and keeping the points down."

The offense managed only 70 yards in the first half, though the Titans did convert both turnovers in the first quarter into touchdowns needing only a combined 16 yards. They scored touchdowns on all three trips inside the red zone, and Ryan Tannehill drove them 90 yards for the winning TD for the offense's longest scoring drive this season.

Cornerback Logan Ryan keeps having himself a season in the final year of the free agent contract that brought him to Tennessee from New England. Ryan had a sack, forced a fumble and intercepted a pass with 18 seconds left to seal the latest win. Ryan is a half sack away from matching his career best of four last season and he has three interceptions.

Darius Jennings. He led the NFL with a 31.7-yard average on kickoff returns in 2018, setting a franchise record along the way. But he was inactive against Tampa Bay with Kalif Raymond active for the first time this season. Raymond showed off his speed with a 45-yard kickoff return that is the longest of the season by a wide margin.

Left guard Rodger Saffold is in the concussion protocol after being knocked out of the game on his ninth play.

5 — Tannehill's TD passes in two starts. That's two off what Marcus Mariota had through six starts before being benched.

The Titans face only one team currently with a losing record the rest of this season. First, they visit Carolina (4-3) on Sunday and may face Patrick Mahomes when Kansas City (5-3) visits on Nov. 10 before their bye week and a chance to rest, self-scout and heal up for the final six games.

By Rob Maaddi 7 minutes ago
By Tom Withers 3 hrs ago
By Kyle Hightower an hour ago
By Dennis Waszak Jr. 2 hrs ago
By Tim Booth 20 hrs ago