Back from neck injury, grateful Hunter excited about Vikes D 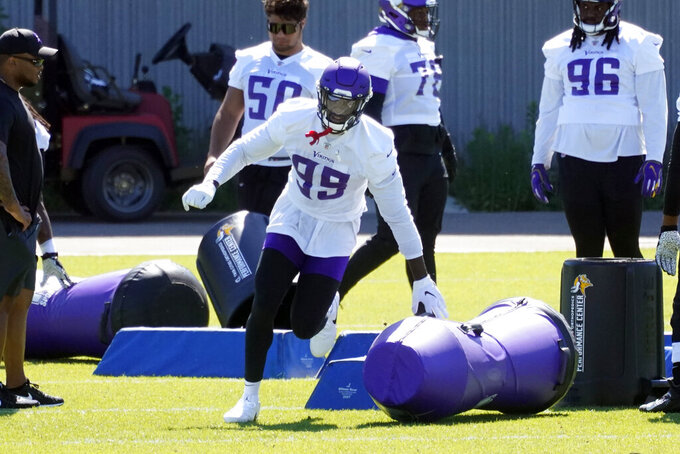 EAGAN, Minn. (AP) — Neck injuries are no joke for an NFL player, and Danielle Hunter's was serious enough to sideline him for the entire 2020 season.

Wincing while the Minnesota Vikings struggled badly without their two-time Pro Bowl defensive end, who became the youngest player in league history to reach 50 career sacks, Hunter developed a deeper appreciation for his place in the game — and for sports medicine.

“I’m just very thankful I’m able to come back from whatever has happened and being able to have a second opportunity going back onto the field and thankful for all these kids that are in school. Just because of them, it’s the reason why I’m here right now,” Hunter said, later explaining that he was referring to people entering the fields of sports medicine.

The opposite of an attention seeker whose soft-spoken demeanor has long contrasted with his imposing stature on the field, Hunter predictably declined to divulge the nature or cause of his injury while addressing reporters Wednesday for the first time in 14 months.

He was hurt at the beginning of training camp last year, a condition initially believed to be minor enough that coach Mike Zimmer vaguely described it as a “tweak,” but by midseason he was recommended for surgery.

Hunter praised the support and education from head athletic trainer Eric Sugarman and his staff, as well as the uplifting presence of family members while he entrenched in the often-lonely process of rehabilitation. Hunter spoke weekly to defensive line coach Andre Patterson, too, a strong connection that undoubtedly influenced his decision to accept a renegotiated contract and report for minicamp this week after skipping the earlier spring sessions.

“We were trying everything that we could possibly try for me to get back to the field the correct way, but it just ended up being the outcome that it had to be,” Hunter said.

NFL Network reported last year that Hunter would seek a trade if the Vikings didn't make him the highest-paid defensive player in the league. That hasn't happened, at least not yet. The bridge toward extending Hunter's time in Minnesota was built this week in the form of a rework of the deal he signed in 2018, converting some of his 2021 salary into a signing bonus for cap relief for the Vikings. In turn, they added an $18 million roster bonus, according to NFL Network, which will kick in next March — unless he's either given a new contract or released to become a free agent.

As for his absence from the practices prior to this week, Hunter sidestepped that question, too.

“The best thing at that time was for me to get myself back in the best shape and in the best healthy shape as possible. With the media, I don’t think I’ve ever discussed anything business-wise, so I’ll leave it at that. I’m happy to be back, and I’m ready to go,” the 26-year-old Hunter said.

He said he's 100% recovered from the injury, but the only way he can get back in actual game shape, of course, is to play in a game. That hasn't happened in 17 months.

“We weren’t sure that he was healthy until he came in and did his physical. He looks fantastic, and he should be ready to go. All the other stuff, the money part and the contract and all that, it’s out of my paygrade,” coach Mike Zimmer said.

Hunter and linebacker Anthony Barr, who also missed most of the 2020 season injury, are almost like free agent additions this year. Their return plus the actual newcomers — defensive tackles Michael Pierce, Dalvin Tomlinson and Sheldon Richardson, cornerbacks Patrick Peterson, Bashaud Breeland and Mackensie Alexander and safety Xavier Woods — has given the Vikings a brighter outlook on a defense that fell apart last season.

“I was pretty excited about what I saw when I came back. I think we’re pretty stacked," Hunter said.

Said Richardson, who was with the Vikings in 2018, with a smile: “I always seem to be playing with some kind of freak-of-nature defensive end.”

With the return of Hunter and the reacquisition of Richardson this week, the defensive line suddenly looks a lot more like the formidable front fours the Vikings fielded in the last decade than the depleted group of 2020.

Fitting with the primary minicamp storyline, former defensive tackle Kevin Williams was announced Wednesday as the latest entrant in the Vikings Ring of Honor.

The five-time All-Pro pick, who was the ninth overall selection in the 2003 draft, played 11 of 13 seasons in the league for Minnesota. He missed only three games to injury. Now residing full-time in his native Arkansas, Williams was invited to Vikings headquarters on the premise of producing some gameday promotional content and surprised by owners Zygi Wilf and Mark Wilf with the news.

“I'm still kind of in a fairy tale now, man,” Williams said after watching practice and addressing the players on the field afterward.

Williams, whose 60 sacks rank third all-time among Vikings defensive tackles behind Pro Football Hall of Fame members John Randle and Alan Page, is tied for the franchise record with four career defensive touchdowns. His addition will bring the Vikings Ring of Honor to 26 members.