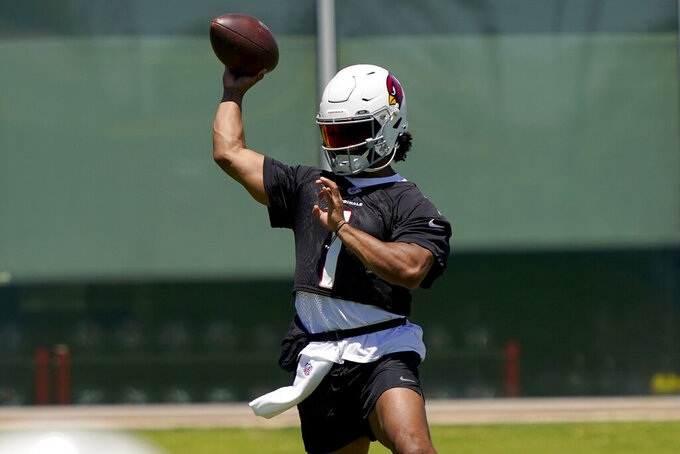 In Brady’s case, the Tampa Bay Buccaneers are thrilled the seven-time Super Bowl champion is playing another season after a brief retirement in February.

“Tom’s a worker. Tom comes in on his own. He doesn’t need to be here,” Buccaneers coach Todd Bowles said about Brady’s absence. “But, you don’t play that long without having inner drive. We have great communication and we have a great relationship. He comes in on his own and works. He doesn’t need the work everyone else needs, but the camaraderie, when he comes in here, is very good.”

While their teams were on the field, Rodgers and Brady were involved in another competition Wednesday, taking on fellow quarterbacks Josh Allen and Patrick Mahomes in “The Match” golf exhibition in Las Vegas.

Rodgers skipped all the OTAs and Green Bay’s minicamp last year during a standoff with team management but won his second straight NFL MVP award and signed a $150 million contract in the offseason. He lost his All-Pro receiver when the Packers traded away Davante Adams and it would seem he’d benefit from additional work with new receivers.

“Yeah, each guy has that right to make that choice,” Packers coach Matt LaFleur said about Rodgers and several teammates, including wide receivers Allen Lazard and Sammy Watkins, missing OTAs.

“If you’re asking me, I want everybody here. So, I think some of the thought process may have changed over what’s transpired over the last two years, especially with our COVID situation where we didn’t have OTAs, and then, but my thing to our guys is, well neither did anybody else. So everybody was playing, had the same circumstances that they were dealing with. So, obviously now, with everybody being open and you’d like to see as many guys as possible here.”

The pandemic forced teams to hold virtual workouts during the 2020 offseason and the NFL Players’ Association advised players to skip modified OTAs last year. The union, in general, wants to decrease the amount of OTAs, but that will have to be negotiated in the next collective bargaining agreement.

Brady, who turns 45 in August, began skipping OTAs in New England in 2018 so he could spend more time with his family. Other players are staying home for business reasons.

Kyler Murray missed some of Arizona’s voluntary sessions while he still waits for a new contract but returned this week. Teammate DeAndre Hopkins is suspended for the first six games of the season so he’s not participating.

Jackson also has an unsettled contract situation and has been absent but indicated on Twitter last week that he plans to show up at some point.

“Our job as coaches is to develop everybody to their fullest, and when they’re here we can do that,” Ravens offensive coordinator Greg Roman said. “That’s what we’re focused on right now. I’m sure Lamar is working hard.”

More than 20 teams are holding OTA sessions next week and mandatory minicamp the following while several wrap up next week. The Bengals and Eagles opted to eliminate mandatory camps.

“We are transitioning away a little bit more from 11-on-11s this year,” Eagles coach Nick Sirianni said. “We have two weeks of OTAs and look forward to getting a lot of good work done with our individual, where we can work on our fundamentals. Then we’ll be doing 7-on-7 because it helps our skill guys and quarterback in making the read and different looks he’s going to get.”

A list of the most notable OTA absences around the league: