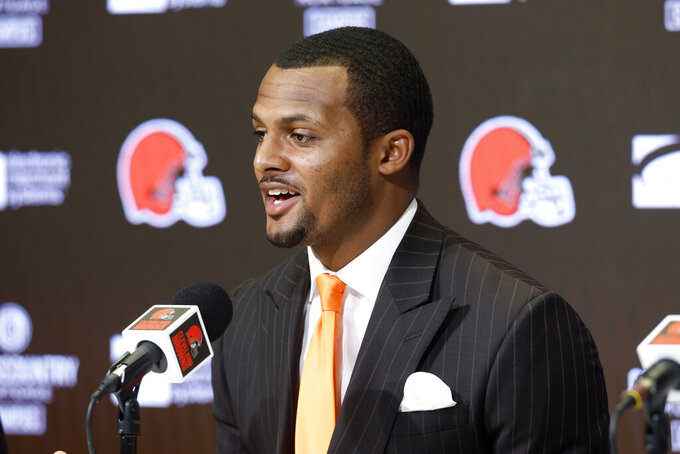 FILE - Cleveland Browns new quarterback Deshaun Watson speaks during a news conference at the NFL football team's training facility, March 25, 2022, in Berea, Ohio. NFL officials will meet this week with Cleveland Browns quarterback Deshaun Watson as the league continues to investigate whether he violated its personal-conduct policy, a person familiar with the plans told The Associated Press on Monday, May 16, 2022. (AP Photo/Ron Schwane, File)

CLEVELAND (AP) — Deshaun Watson's week included meeting with NFL investigators and golf in the Bahamas with his new Browns teammates.

Next week he'll be back on the field, and under more public scrutiny.

Some of the women who have accused Cleveland's quarterback of sexual misconduct during massage therapy sessions while he was with Houston have been interviewed by HBO's “Real Sports with Bryant Gumbel.”

Per a release from the network on Friday, “several” of the women will “detail the alleged abuse they suffered and share their reactions to Watson’s record-breaking $230 million contract with the Cleveland Browns.” The show will air on Tuesday.

Watson, who signed with the Browns in March, has denied any wrongdoing.

He's facing civil lawsuits from 22 women, who allege he behaved inappropriately while they gave him massages. In a recent deposition that became public this week, Watson acknowledged that one of the women was crying at the end of a session. He said he apologized to her via text.

While Watson has not been charged with any criminal complaints — two grand juries in Texas declined to indict him — he's facing possible punishment from the NFL.

The league is trying to determine whether he violated its personal-conduct policy. Some of the league's investigators met with Watson this week in Houston.

The timing of the interview could be a sign the league is close to completing its inquiry into Watson's behavior. Commissioner Roger Goodell has said multiple times there was no timeframe on when Watson could be disciplined.

Former U.S. District Court Judge Sue Robinson, who was jointly appointed by the league and players' association, will review the league's findings and determine if Watson violated the league's policy.

NFL spokesman Brian McCarthy told the AP on Friday that “the review is ongoing and active.”

Amid his ongoing legal entanglement, Watson treated more than two dozen of his offensive teammates to a trip to the Bahamas this week for some bonding. A video posted on his Instagram page showed Watson making a long putt while golfing Friday.

Watson has been attending Cleveland's voluntary offseason program over the past month, and he's expected to be at the team's training facility in Berea, Ohio, on Monday when organized team activities resume.

Watson has not spoken to the media since his introductory news conference on March 25, a week after the Browns convinced the three-time Pro Bowler to waive his no-trade clause and signed him to an historic, fully guaranteed contract.