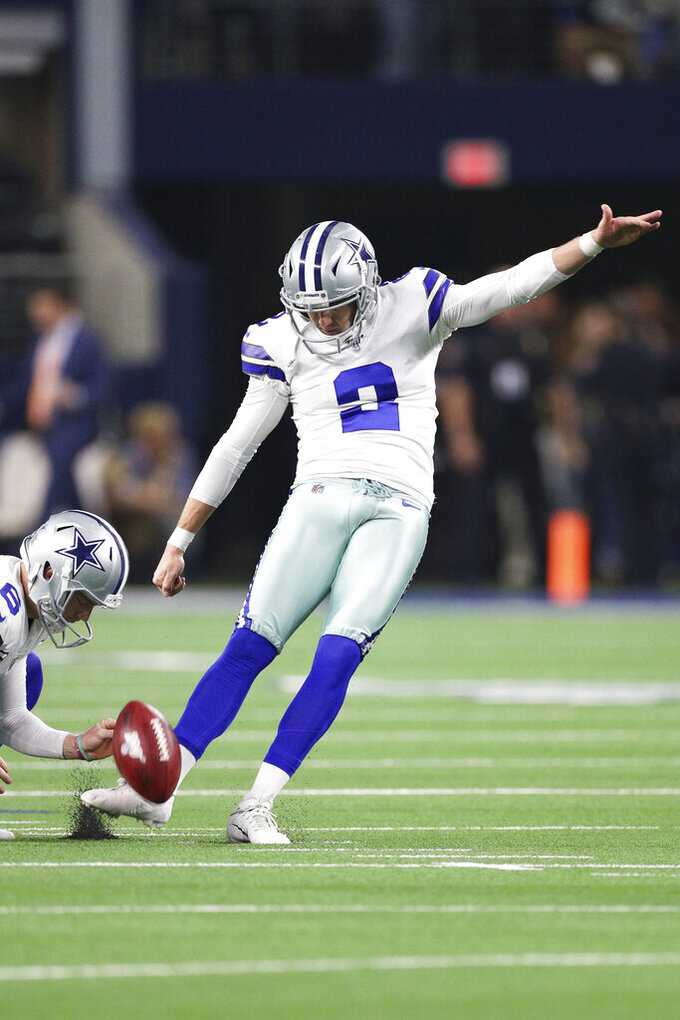 Dallas Cowboys kicker Brett Maher (2) kicks a field goal during warm-ups in an NFL game against the Buffalo Bills, Thursday, Nov. 28, 2019 in Dallas. The Bills defeated the Cowboys 26-15. (Margaret Bowles via AP)

Maher is the only kicker in NFL history with three field goals of at least 60 yards, but the Cowboys couldn't count on him for the shorter ones that are often more critical.

It's the second time Forbath has replaced a struggling kicker midseason. The 32-year-old did it with Minnesota in 2016, taking over for Blair Walsh and making all 15 field goals before going 32 of 38 in 2017.

The Cowboys had Forbath on their roster during the offseason in 2012, cutting him that spring before he joined NFC East rival Washington and led the NFL at 94% by making 17 of 18 kicks as a rookie that year.

Forbath kicked for New England on Dec. 1, making a 23-yarder while missing one of two extra points in the Patriots' 28-22 loss at Houston.

Maher had never kicked in the NFL when he was the surprising choice over trusted veteran Dan Bailey coming out of the preseason last year. Maher kicked a 62-yarder in 2018 and added another from 62 along with one from 63 this season.

The Cowboys brought in three kickers for tryouts last week after Maher had a 35-yarder blocked and missed from 47 yards in a 26-15 loss to Buffalo. After Dallas stuck with Maher, he had another critical miss from 42 in last week's 31-24 loss to Chicago.