Eagles pull off a stunner, draft Jalen Hurts in second round 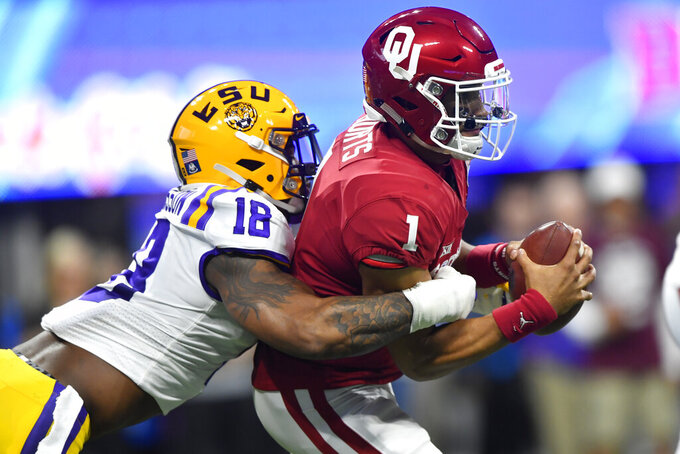 FILE - In this Dec. 28, 2019, file photo, LSU linebacker K'Lavon Chaisson (18) sacks Oklahoma quarterback Jalen Hurts (1) during the first half of the Peach Bowl NCAA semifinal college football playoff game in Atlanta. Chaisson was chosen by the Jacksonville Jaguars in the first round of the NFL draft Thursday, April 23, 2020. (AP Photo/John Amis, File)

After giving Carson Wentz a playmaker, the Philadelphia Eagles drafted his backup.

The Eagles selected Oklahoma quarterback Jalen Hurts in the second round of the NFL draft on Friday night, a stunning move for a team with more pressing needs.

Then they took Davion Taylor, a hybrid safety-linebacker from Colorado, in the third round with the 103rd overall pick.

Philadelphia hoped it filled a big void in the first round, taking TCU wide receiver Jalen Reagor with the 21st pick. But the team passed on other receivers and defensive players to add Hurts at No. 53.

“Quarterback is the most important position in sports,” Eagles executive vice president and general manager Howie Roseman said. “We have shown how we feel about Carson by our actions, by the amount of picks we put into him, and we showed it by the contract extension. We believe this is the guy to lead us to our next Super Bowl championship. But for better or worse, we are quarterback developers. We want to be a quarterback factory.”

Hurts transferred from Alabama to Oklahoma and became a Heisman Trophy finalist last year when he threw for 3,851 yards and 32 touchdowns.

“The opportunity to go there, be part of the organization, it’s surreal,” Hurts said about playing in Philadelphia. “It’s an opportunity to grow, learn and be best quarterback I can be. I’m ready to go to work. I’ve always been about the grind.”

Hurts will provide insurance for Wentz, who started 16 games last season and led the Eagles to the NFC East title but was knocked out of a wild-card playoff loss to Seattle with a concussion.

Wentz, the No. 2 overall pick in 2016, helped Philadelphia secure the NFC’s No. 1 seed in his sophomore season but tore two knee ligaments and watched Nick Foles lead the Eagles to the franchise’s first Super Bowl title. Wentz injured his back in 2018 and Foles stepped in again and led the team to a playoff win.

Roseman said he spoke with Wentz about picking Hurts earlier in the day. Wentz, who finished third in NFL MVP voting in 2017, signed a $137 million contract extension last season.

“We think Carson is a phenomenal player and nobody is going to be looking at a rookie quarterback taking over for a Pro Bowl quarterback who was on the cusp of being an MVP,” Roseman said.

Hurts, 6-foot-1 and 218 pounds, led two elite programs to the College Football Playoffs and put up big numbers both passing and rushing. His passing accuracy and consistency were the biggest questions entering the draft.

Hurts went was 38-4 as a starter, including 26-2 for the Crimson Tide and was the Southeastern Conference player of the year as a freshman. Then he was benched at halftime of the national championship game against Georgia, with Tua Tagovailoa leading the comeback victory and ultimately winning the starting job for the 2018 season.

“He has uncanny toughness, poise and competitiveness,” said Andy Weidl, the team’s vice president of player personnel. “He’s a natural leader. His starting record speaks for itself.”

Eagles coach Doug Pederson said the team would explore ways to use him with Wentz and mentioned the way New Orleans features Taysom Hill.

“He’s a great runner. He can throw on the run. He has a unique set of skills that we’re going to look at it,” Pederson said.

Hurts wouldn’t get into any specifics about his conversations with the Eagles.

“I have no idea what’s going to happen,” Hurts said. “I don’t put a ceiling on myself or my game.”

Taylor, 6-foot and 228 pounds, had an unusual path to the NFL. He only played in two games in high school because his family observed the Seventh-day Adventist Sabbath on Friday nights.

Taylor had two 60-tackle seasons at Colorado and starred in track and field, where he posted a 10.51 time in the 100-meter dash at the PAC-12 championships.

He was impressive at the Senior Bowl and the NFL scouting combine and again at CU’s pro timing day, where he trimmed a tenth of a second off his 4.49 time from Indianapolis in the 40-yard dash.

Philadelphia has six remaining picks, including three choices in Saturday's fourth round.