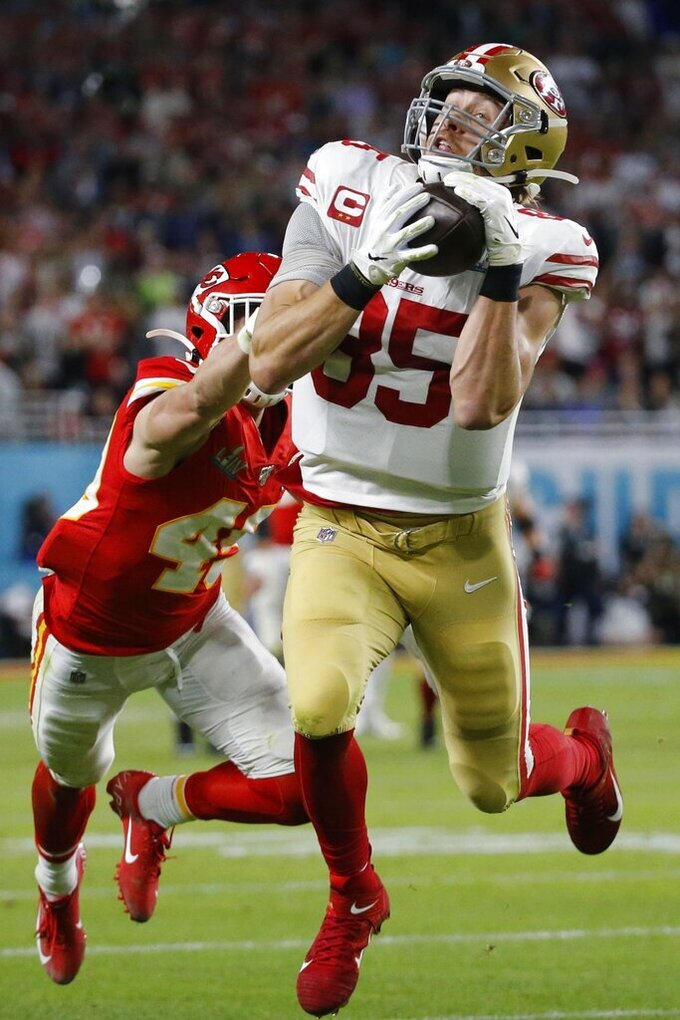 FILE - In this Feb. 2, 2020, file photo, San Francisco 49ers' George Kittle (85) catches a pass in front of Kansas City Chiefs' Daniel Sorensen during the first half of the NFL Super Bowl 54 football game in Miami Gardens, Fla. The play was called back on a penalty by Kittle. Kittle has agreed to a five-year extension with the San Francisco 49ers that reportedly is the richest contract ever at the position. A person familiar with the deal says the sides agreed Thursday, Aug. 13, 2020, on the deal to keep Kittle off the market next offseason. (AP Photo/Mark Humphrey, File)

SANTA CLARA, Calif. (AP) — All-Pro tight end George Kittle has signed his five-year, $75 million extension with the San Francisco 49ers that is the richest contract ever at the position.

Kittle officially signed the deal Friday, a day after agreeing to the contract that keeps him locked up in San Francisco through the 2025 season.

“I love being a 49er and am blessed to have the opportunity to wear red and gold for years to come,” Kittle said in a statement. “I can’t wait to continue our quest to bring another Super Bowl back to the bay.

“I want to thank my teammates for their hard work and help in making me be the best teammate, player and man I can be each week. Together we have already accomplished amazing things, but we all know there is still so much more to do. It’s an incredible locker room to be a part of and I am grateful to my brothers for making this such a fun and exciting place to play football.”

Kittle had been one of the NFL’s biggest bargains after being drafted in the fifth round in 2017 and now he gets the biggest contract ever at the position. The previous high for average salary for a tight end, according to overthecap.com, was the $10.6 million Hunter Henry is getting from the Chargers this season on the franchise tag.

The Niners could have used the tag on Kittle the next two offseasons, but instead managed to work out a long-term deal that satisfied both sides.

“George was part of our first draft class and represents as well as anyone the core values we covet in the players we build our team with,” Lynch said. “His talent and spirit are unique, his will and grit contagious and his production undeniable. We can’t wait to see what the future holds for George and our team with him a part of it.”

Kittle has been the most productive tight end in NFL history through his first three seasons with 197 catches for 2,664 yards. But he is almost equally as skilled as a blocker in the run game where he is a key piece in coach Kyle Shanahan’s dynamic offense.

After a solid rookie season, Kittle broke through in 2018 when he set an NFL record for yards receiving in a season for tight ends when he had 88 catches for 1,377 yards and was named a second-team All-Pro.

He was almost as productive last season, despite missing two games with injuries, when he had 85 catches for 1,053 yards and was a first—team All-Pro. He also was a major reason the Niners went 13-3 on the way to a Super Bowl appearance.

It has been quite a start to a career for a player who caught only 48 passes in 25 college games at Iowa, leading him to fall to the fifth round of the draft.