International players get taste of NFL at tryout in London 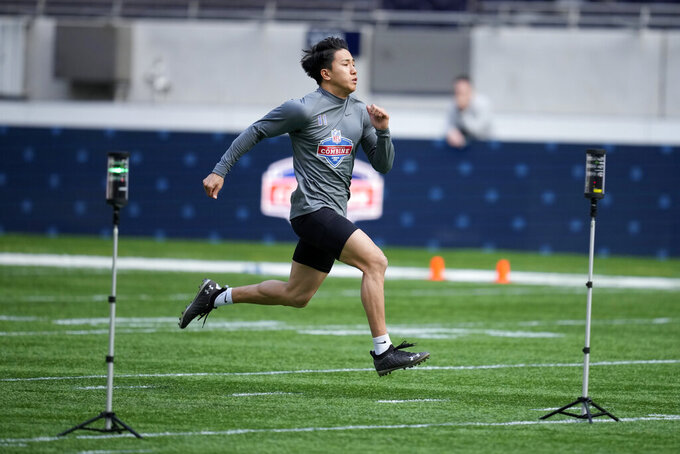 LONDON (AP) — Shouts came in multiple languages — “Allez!” by the French contingent — but grunts were universal at an NFL tryout held in an English Premier League stadium.

The NFL's international combine on Tuesday at Tottenham Hotspur Stadium gave more than 40 players from around Europe and beyond a chance to take a step toward earning a roster spot in the league.

Unlike the top college kids at the annual NFL combine in Indianapolis, many of these guys are older and work side jobs while competing in European leagues far out of the spotlight.

“I’ve never played a snap of football in my life. This is something new to me,” said the 6-foot-5, 275-pound New Zealander, who was listed as a defensive lineman.

Tuione, a former rugby player who lives in Hawaii, completed drills along with the other players in an evaluation for possible spots in the NFL’s International Player Pathway program.

“I came here today with no expectations but to put my best foot forward,” the 23-year-old Tuione said on the field where the Jacksonville Jaguars will face the Miami Dolphins on Sunday. “I came here expecting to ball out, but I’m sore in places I’ve never been sore in my life.”

Instead of team scouts, it's the the NFL that evaluates the players and selects a handful to train in the United States for three months, after which final choices are made to allocate players to NFL teams for the 2022 season. And then, they still need to win a spot on the team roster.

It was the third international combine after one in Australia in 2018 and another in Germany in 2019.

Players ran 40-yard sprints, cone drills and did the broad jump on Tuesday. Receivers and defensive backs worked on routes. A day earlier, they all did the vertical jump and bench press in a gym.

British and German players comprised more than half of the mostly European group, though Nigeria, New Zealand and Japan were also represented. Yoshihito Omi, a 25-year-old wide receiver from Japan, drew an “oooh" from other players when he made an over-the-shoulder catch down the sideline.

“Some of these guys are going to make it,” said former Patriots offensive tackle Sebastian Vollmer, a German who won two Super Bowl rings while protecting Tom Brady. “It's a long journey. (This) is a small step, but it's crucially important.”

No quarterbacks were invited. Likewise, there were no kickers or punters.

German offensive lineman Fabian Kratz, who plays for the Cologne Centurions, had a scholarship offer five years ago to play for Oregon State. But he turned it down to stay with his grandmother, who had been diagnosed with Alzheimers.

“I feel like it’s my chance to make up for what I missed when I was 17,” Kratz said. “This is what I’ve dreamed about since I started playing football.”

Kratz had impressed in a season of high school football in Naperville, Illinois, amassing 18 scholarship offers. He had no regrets about returning home to be with his ailing grandmother, Sophie.

“She passed away a year after. It was the right decision for me,” he said.

Arizona Cardinals defensive end Jack Crawford, currently on injured reserve, was on hand and said international players, while less experienced, tend to be more coachable than their American peers.

“That's one of the qualities I had in me that helped me. I was always willing to learn,” said the 33-year-old London native, who played at Penn State. “I always felt like I was playing catchup. A lot of the kids I came in with, the American kids who grew up playing their whole lives, I was able to outlast them. They felt like they had it down.”

The NFL is making a renewed push internationally. It has played 39 international regular-season games: 29 in London, six in Toronto, and four in Mexico City. The league has lined up Germany next.

Tuione hopes he's next, too.

“We laid it all out on the field,” he said. “Now it's just a waiting game to see if all our hard work has paid off.”