Kubiak impact on Vikings’ offense is clear; Broncos to visit 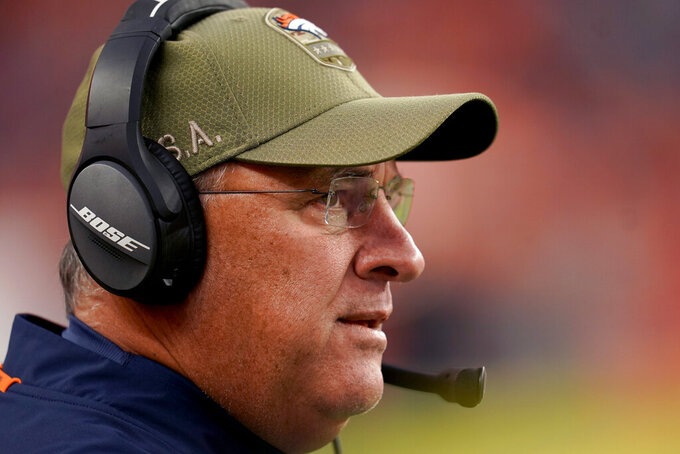 MINNEAPOLIS (AP) — The Minnesota Vikings needed to refresh their offense after that flop of a finish to last season, and coach Mike Zimmer sought another experienced confidant.

Adding Gary Kubiak to the staff has clearly changed the dynamic around this team for the better.

“Gary has been tremendous. It’s probably the best thing that’s ever happened to me since I’ve been here,” said Zimmer, who’s hardly prone to hyperbole.

Though he has the lower-profile title of senior adviser and assistant head coach and works from the press box during games, Kubiak has not escaped attention in Minnesota. The resume of a former NFL quarterback featuring 11 years as an offensive coordinator in the league, 10 seasons as a head coach and four Super Bowl rings came with instant credibility. His collaborative, unassuming approach as a mentor to offensive coordinator Kevin Stefanski and a support for quarterback Kirk Cousins has been well-received around the team.

The proof of a positive impact can be found in the production, too. The Vikings (7-3) are fourth in the NFL in yards per play (6.1) and ninth in points per game (26.2) after ranking 19th in both of those categories last year.

This week, Minnesota hosts Denver, shining an even brighter spotlight on Kubiak. The Broncos (3-6) were his longtime team, as a player, assistant, coach and adviser. After spending the last two years, largely for health reasons, as a draft consultant to president of football operations John Elway, Kubiak was considered a favorite to return to the sideline this season as new coach Vic Fangio’s offensive coordinator.

They weren’t able to work out the particulars, though, leading Kubiak to the Vikings. Zimmer fired offensive coordinator John DeFilippo with three games left on the 2018 schedule, making Stefanski his fourth play caller in six year.

Zimmer long respected the scheme that Kubiak directed in Denver. Outside zone running and play-action passing with multiple tight ends were among the tenets that have proven to be ideal fits for Cousins, running back Dalvin Cook and a mobile offensive line that frequently struggled with both run blocking and pass protection in the prior system. Zimmer even said during the offseason that he found listening to Kubiak discuss strategy “almost romantic,” with the 63-year-old immediately re-energized by his 68-year-old colleague in a game that has increasingly given big-time jobs to up-and-comers a generation behind them.

Though it’s been two decades since the Broncos won back-to-back Super Bowls with this scheme, the creativity of Stefanski and the adaptability of Kubiak have helped the Vikings keep it relevant. Kubiak, who declined interview requests this week, told Zimmer that maintaining the legacy of the system was important to him when he was hired last winter.

“He’s open to anything that looks like it makes sense,” Zimmer said. “I think that’s just the type of guy he is.”

Broncos quarterback Brandon Allen, who won his first NFL start in the team’s most recent game on Nov. 3 against Cleveland, might just be the fill-in between original starter Joe Flacco and second-round draft pick Drew Lock. He’s aiming to make moving him back to the bench as difficult as possible for Broncos brass.

“I think playing well does that,” said Allen, who last started a football game on Jan. 2, 2016, for Arkansas in the Liberty Bowl.

Flacco hurt his neck last month and was placed on injured reserve. Lock, the rookie from Missouri, recently returned to practice after missing three months with a sprained thumb.

LOOKING FOR AN EDGE

Though three-time All-Pro outside linebacker Von Miller has only four sacks for the Broncos this year, the Vikings are plenty wary of the pass rush danger they present, particularly with Fangio in charge. He was Chicago’s defensive coordinator for the last four seasons, and the Bears had their way with Cousins and the Vikings in 2018. The last time Minnesota played Denver was in 2015, a 23-20 loss on Oct. 4 to the eventual Super Bowl champions.

Though tight end Kyle Rudolph has four touchdown catches in the last four games, he has been and will continue to be a key blocker in this scheme.

“I definitely feel more equipped than I did four years ago,” Rudolph said.

Rookie tight end Noah Fant just had a breakout game for the Broncos, with a 75-yard touchdown catch against the Browns. Fant became the first rookie with a scoring reception of at least 75 yards since Tampa Bay’s Tyji Armstrong went for 81 yards in 1992. Allen became the first quarterback with a touchdown throw that far in his first NFL start since Robert Griffin III’s 88-yarder in 2012 for Washington.

After setting an NFL record in 2017 by allowing a third-down conversion rate of 25.3% that was the lowest since the league started tracking the statistic in 1991, the Vikings again finished first in that category in 2018 with an allowance of 30.5%. This season, however, they’ve fallen to 16th in the league at 38.7%. On plays with third-and-10 or longer for the opponent, they’re down to 23rd in NFL at 22.9%. Dallas went 3 for 3 in those situations last week against them.

With Tim Patrick’s return from injured reserve this weekend, the Broncos will finally see the big wide receiver set they’ve been eager for since trading Emmanuel Sanders to San Francisco. Patrick, who missed eight games with a hand injury, is 6-foot-4 and 212 pounds, the same height and just four pounds lighter than leading receiver Courtland Sutton.

“He has sure hands,” Sutton said. “The dude knows what he’s supposed to be doing, and he makes plays, which is something every offense needs. It’s exciting to have him back because he does so much. He can run plays from the slot because he’s shifty. He can go make the big play on the sideline because he’s a big guy. He’s fast and he’s smart. Everything that you want out of a receiver his size, he does it, and he does it really, really well.”