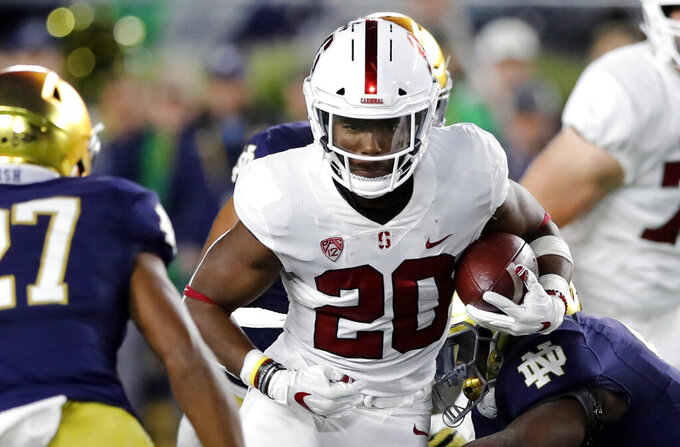 FILE - In this Sept. 29, 2018, file photo, Stanford running back Bryce Love rushes during the first half of an NCAA college football game against Notre Dame in South Bend, Ind. The Washington Redskins on Saturday, April 27, 2019 selected Bryce Love 112th overall. Love is coming off tearing the ACL in his right knee in his final college game in December. (AP Photo/Carlos Osorio, file)

ASHBURN, Va. (AP) — On Day 3 of the NFL draft, the Washington Redskins made one fourth-round pick for the long-term future and another for immediate help.

The Redskins on Saturday selected Stanford running back Bryce Love 112th overall and Indiana guard Wes Martin 131st. Love is coming off tearing the ACL in his right knee in his final college game in December, while Martin is expected to compete to start at right guard right away.

Love said his rehab is on track and he hopes to be on the field sometime in training camp. He joins a crowded backfield with Washington that already includes Adrian Peterson, 2018 second-round pick Derrius Guice (who is also coming off a torn ACL), third-down back Chris Thompson and 2017 fourth-rounder Samaje Perine.

Peterson is "one of the greatest to play the position," Love said on a conference call. "Being able to come in and learn from him and learn from all the other backs in the room is going to definitely be big."

In four years at Stanford, Love rushed for 3,865 yards and 30 touchdowns. After running for 2,118 yards as a junior, a nagging ankle injury limited Love to 739 years as a senior before he injured his knee.

Love went into last season a Heisman Trophy candidate before the injuries derailed him. But he said he "wouldn't change anything" about his decision to stay in school even though his draft stock dropped.

"Life is about learning and developing and progressing and obviously I feel like I'm a better player for what I went through," Love said.

Martin took 1,469 snaps at left guard over the past two seasons and allowed just two sacks. He will push former Giants and Jaguars lineman Ereck Flowers for the starting job between left tackle Trent Williams and center Chase Roullier.

"I knew they were in the market for a guard, so I definitely knew I was on the radar," Martin said. "I'm just really excited to get in there and work my tail off and do everything I can to help the organization."