Saints' Murray says he can't replace Ingram, but can help 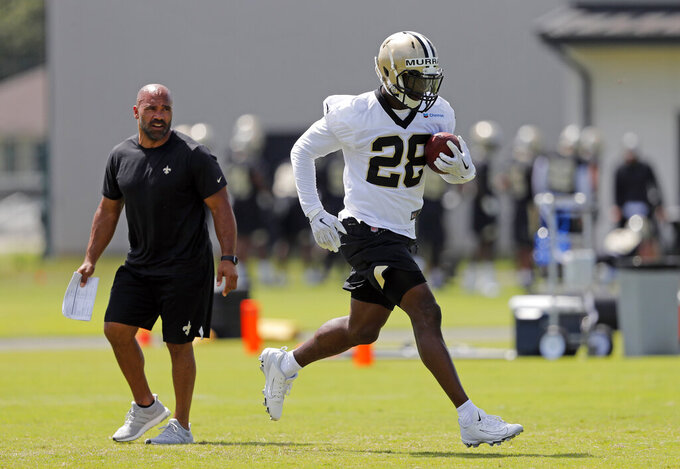 FILE - In this May 23, 2019, file photo, New Orleans Saints running Latavius Murray runs through drills during the NFL football team's practice in Metairie, La. Murray doesn’t see himself as a replacement for his friend and former offseason training partner, Mark Ingram--not that he can’t appreciate why others might view him as such. “Human nature for fans or anybody is to compare us, because obviously a very good running back leaves and we have to fill that void,” Murray said Thursday, May 30, after New Orleans completed its sixth full-squad voluntary practice of the offseason. (AP Photo/Gerald Herbert, File)

METAIRIE, La. (AP) — New Saints running back Latavius Murray doesn't see himself as a replacement for his friend and former offseason training partner, Mark Ingram — not that he can't appreciate why others might view him as such.

"Human nature for fans or anybody is to compare us, because obviously a very good running back leaves and we have to fill that void," Murray said Thursday after New Orleans completed its sixth full-squad voluntary practice of the offseason.

"My job is to come in here and do what I can do and provide for this team what I can provide, so there's no added pressure when it comes to that.

"To think about replacing someone — I don't think of it as that. I can't," Murray added. "They brought me in because they feel that I can help."

Murray, 29, who has rushed for as many as 1,066 yards in a season (in 2015 with the Raiders), sees himself as a short-yardage, power rusher who can serve as an effective complement to New Orleans' versatile and shifty first-string running back, Alvin Kamara.

Murray said he is not averse to experimenting as a potential receiving target out of the backfield, but figures he needs to focus most on running "between the tackles, downhill, scoring when I'm down there, getting tough yards, protecting the quarterback — those are things that I pride myself in and those are things that I've done well."

Murray was signed by New Orleans as a free agent in March, shortly before Ingram — the Saints' 2011 first-round draft pick — accepted a free-agent offer from Baltimore .

Shortly after, Murray said he called Ingram and "just told him, first off, I was happy for him and his new deal and his new team, which is a really good team. And he just told me to hit him up if I needed any advice, anything around the area, and just told me that I would love this locker room and love the guys in there."

Murray is also joining some fellow former Vikings who also have recently signed with New Orleans, including interior lineman Nick Easton. Murray bonds well with offensive linemen and his "physicality" as a runner stands out, Easton said.

"He knows how to get a first down and he breaks a few (long runs), so he's a good back," Easton said.

Murray is entering his seventh pro season out of UCF, where as a senior in 2012 he rushed for 1,106 yards, caught 27 passes and finished with 1,337 yards and 19 touchdowns from scrimmage.

The Oakland Raiders, then coached by current Saints defensive coordinator Dennis Allen, drafted Murray in the sixth round.

An ankle injury landed Murry on injured reserve in August 2013, wiping out his rookie season, but he has played in 77 regular-season games during the previous five seasons — the first three with Oakland and past two with Minnesota.

While with the Raiders, he conducted some offseason workouts in south Florida with Ingram, and more recently joined Ingram on a USO tour.

During his stint with the Vikings, Murray worked in tandem with running back Dalvin Cook and mistakenly said, "Dalvin," when referring to Kamara before quickly correcting himself.

"Sorry. Alvin. I've got to get used to that," Murray said with a self-effacing smile. "When you get Alvin out there in space against some linebackers and here I'm in the backfield and the (opposing) team doesn't know if you're going to hand the ball off or throw it to one of the guys out there ... things like that are just hard to defend.

"It's just my job to make sure I'm doing what I do best so that I'm involved in those situations and can continue to make them an advantage for us."

Notes: Kamara missed Thursday's practice with what coach Sean Payton described as a "stomach bug." ... Payton also said starting right guard Larry Warford, who has not been seen at practices open to reporters this week and last week, is rehabilitating from an undisclosed injury and should be available to practice "sooner than later."