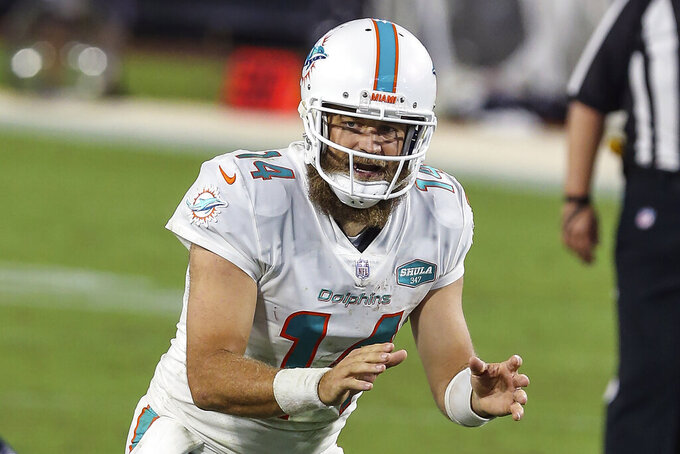 FILE - Miami Dolphins quarterback Ryan Fitzpatrick (14) waits for the snap during the second half of an NFL football game against the Jacksonville Jaguars in Jacksonville, Fla., in this Thursday, Sept. 24, 2020, file photo. Ryan Fitzpatrick has agreed to sign a one-year deal with Washington, according to a person with direct knowledge of the move. The person spoke to The Associated Press on condition of anonymity Tuesday, March 16, 2021, because the deal cannot be official until the new league year starts Wednesday. (AP Photo/Gary McCullough, File)

Washington is the next stop on the FitzMagic tour.

Veteran quarterback Ryan Fitzpatrick and cornerback William Jackson have agreed to sign with the Washington Football Team, according to a person with direct knowledge of the moves. The person spoke to The Associated Press on Tuesday on condition of anonymity because the deals cannot be official until the new league year starts Wednesday.

Fitzpatrick — who has earned the “FitzMagic” nickname for his late-game heroics late into his 30s — gives Washington more experience at football's most important position after it released AP Comeback Player of the Year Alex Smith. The team now has Fitzpatrick, journeyman-turned-playoff standout Taylor Heinicke and coach Ron Rivera favorite Kyle Allen under contract at quarterback.

Washington also has the 19th pick in the draft and could use one of its first few selections on a QB of the future. Fitzpatrick would be in the mix for the present on what’s expected to be a one-year deal. Multiple reports put the value at $10 million with an additional $2 million in incentives.

Much like with the Dolphins' Tua Tagovailoa, Fitzpatrick could serve as a combination of a bridge to the future and a mentor for a rookie QB getting accustomed to the pros.

The Harvard graduate was a seventh-round pick, 250th overall, in the same 2005 draft where Smith went first. He has appeared in 165 NFL games, all in the regular season. He has 223 touchdowns, 179 interceptions and 34,977 yards passing.

Jackson, 28, joins Washington after four seasons with the Bengals during which he recorded three interceptions in 59 games, including 48 starts. He replaces Ronald Darby, who left Washington after one season to sign a $30 million, three-year deal with the Denver Broncos.