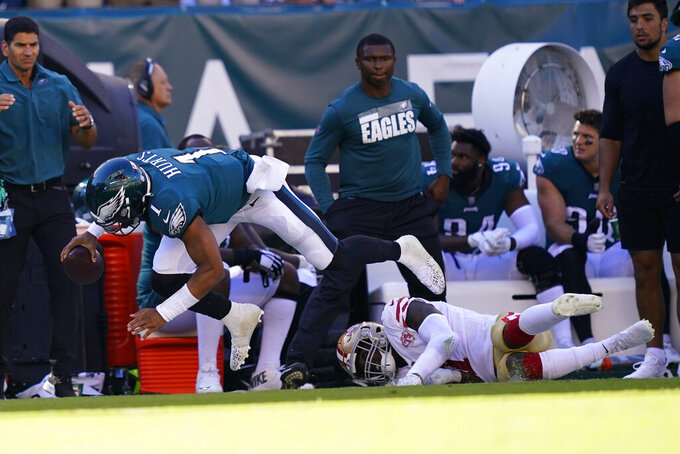 Philadelphia Eagles quarterback Jalen Hurts (1) falls with the ball during the second half of an NFL football game against the San Francisco 49ers on Sunday, Sept. 19, 2021, in Philadelphia. (AP Photo/Matt Rourke)

The Philadelphia Eagles blew a chance to start 2-0 mainly due to questionable play-calling, including the new coach’s attempt to use a variation of the old coach’s famous play that led to a Super Bowl victory.

With the Eagles (1-1) leading the San Francisco 49ers 3-0 in the second quarter Sunday, the offense had five cracks at scoring a touchdown after Jalen Hurts completed a 91-yard pass to Quez Watkins to the Niners 6.

On the sixth try, a fourth down from the 3, Hurts took a shotgun snap, handed it to wide receiver DeVonta Smith, who flipped to wideout Greg Ward on a reverse. Hurts drifted into the end zone and was Ward’s only option. San Francisco’s defense didn’t bite. Ward, a college quarterback, threw it away.

When Doug Pederson drew that play up right before halftime against the New England Patriots in the Super Bowl four years ago, quarterback Nick Foles was wide open in the end zone and caught Trey Burton’s pass.

A statue of Foles and Pederson calling that play stands outside the Linc. Perhaps it inspired Sirianni to make the call in his first home game.

It never should’ve reached that point. The Eagles had a first down at the 1 after a pass interference penalty. Instead of a sneak by Hurts, Sirianni called for a pass that fell incomplete, a shotgun handoff that went for minus-3 yards and Hurts scrambled for 1 yard on a broken play.

Hurts, by the way, scored on a sneak from the 1 later in the game.

Sirianni was critical of his play-calling just one week after designing a scheme that led to a 32-6 rout over Atlanta.

“This accountability thing only works if you’re holding yourself accountable first,” he said. “Everything is going to start with me. ... If I’m not holding myself accountable, everybody is not going to hold themselves accountable. That’s how I view my role.

“If I want the players to do it, I need to do it first. I’ve got to lead by example.”

"So, it kind of just goes through just watching the tape, checking the call sheet again, looking back at the studies that we did, and just evaluating every call like I evaluate every play of the players.”

The defense nearly went six quarters to start the season without giving up a touchdown and has allowed 23 points in two games. The Eagles will be in position to win games because their defense is going to keep them within reach.

The pass rush had no sacks and only two hits on Jimmy Garoppolo. Now, Pro Bowl defensive end Brandon Graham is gone for the rest of the season.

Defensive tackle Javon Hargrave had seven tackles, including two for loss in the first three series in which Philly’s defense forced three straight three-and-outs. Hargrave had two sacks in Week 1.

One week after torching Atlanta’s secondary and completing 77% of his passes, Hurts only completed 12 of 23 passes against a secondary missing two starting cornerbacks. He underthrew two deep balls and Jalen Reagor’s 36-yard TD was overturned because he stepped out of bounds before making the catch.

Sirianni confirmed Graham ruptured his Achilles tendon and will miss the rest of the season. Right guard Brandon Brooks has a strained right pectoral and will likely be placed on injured reserve but is expected to return. Both are major blows. Graham is an excellent leader on the field and in the locker room. He plans to continue making his presence felt from the sideline. Brooks is one of the best at his position but hasn’t been healthy lately. He missed the 2020 season and a playoff game. Rookie Landon Dickerson was selected in the second round to eventually start and he’s expected to get that chance in Week 3. ... Tight end Zach Ertz was placed on the COVID-19/reserve list.

0 — The Eagles forced no turnovers for the second straight game. A fumble recovery in the fourth quarter against San Francisco was negated because of a helmet-to-helmet hit by safety K’Von Wallace.