Houston's 100-sack milestone was a bright spot for Ravens 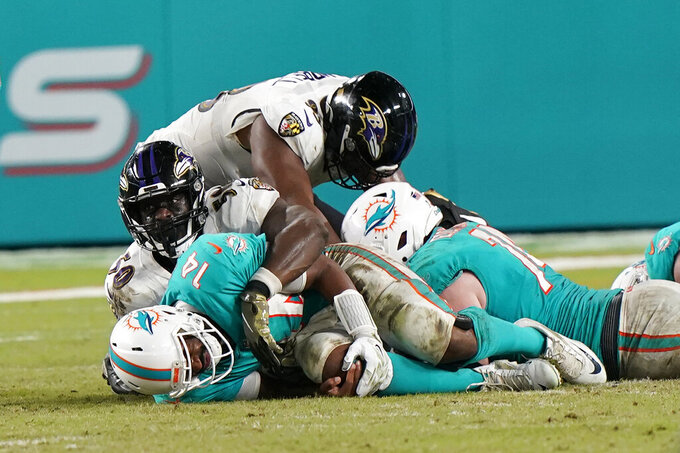 Miami Dolphins quarterback Jacoby Brissett (14) holds his knee after he was sacked by Baltimore Ravens outside linebacker Justin Houston during the second half of an NFL football game, Thursday, Nov. 11, 2021, in Miami Gardens, Fla. (AP Photo/Wilfredo Lee)

OWINGS MILLS, Md. (AP) — Justin Houston reached the 100-sack mark, then made good on his plan to ask for a keepsake from the opposing quarterback.

“We switched jerseys after the game, so I was able to get the jersey,” the Baltimore linebacker said.

Houston's sack was one of the few bright spots for the Ravens in their 22-10 loss at Miami last Thursday, but he earned the right to enjoy it. Since Baltimore acquired him shortly before the season, he's been a solid addition. Although Houston only has three sacks through eight games, he also has 13 quarterback hurries, more than he had all of last season.

So his milestone was a long time coming.

“It was great to see him get his 100th sack. That was really great, and he was excited about that,” Ravens coach John Harbaugh said. “He’s a really good pass rusher, sure, but he’s also a really good football player. He plays the run well. He drops occasionally for us in our system. He’s great to be around every day. He always has a really good demeanor, and he works really hard.”

The 32-year-old Houston is in his 11th season. He spent eight with Kansas City and two with Indianapolis before signing with the Ravens late in the offseason. His sack last week actually brought his career total to 100 1/2. It also left Dolphins quarterback Jacoby Brissett with an injured knee; he was replaced by Tua Tagovailoa following that play.

Houston said that didn't make it too awkward for them to do their jersey exchange.

“He knew I wasn’t the guy that hit his knee,” Houston said. “I was actually trying to turn him away from it.”

Houston said he might have the jersey framed and may give it to his son, who has been on his case about getting to 100 sacks — and more.

“He said, ‘You can’t retire until you get 130,’” Houston said Wednesday, drawing a laugh.

Houston said he's actually a little disappointed with how his season's gone so far, but he understands sometimes players create a lot of near-sacks without finishing many of them off.

“You never know when it can change. I know turnovers come in bunches. Sacks, they come in bunches,” he said. “When it rains, it pours, and you just hope it rains soon.”

Regardless of how many sacks Houston ends up with, he's earned good reviews for his experience, leadership and work ethic.

“There’s a reason these guys are so successful for so long in this league,” Harbaugh said. "Once you kind of suspect that they’re that kind of guy, and then you get them here and you see how they work every day, you’re confirming that really is what it takes. For the young guys to watch guys like that and say, ‘Oh, if I want to be in the league and I want to have that kind of success for a long time, I’ll do it like he does it.’”

Odafe Oweh, the rookie linebacker Baltimore drafted in the first round, had a good vantage point for Houston's sack — and seemed perfectly happy that it went to the veteran.

“I thought I was going to get the sack at that point, but he got it. He took it away,” Oweh said. “I celebrated with him. It’s just so crazy that I’m playing with someone that has 100 sacks.”