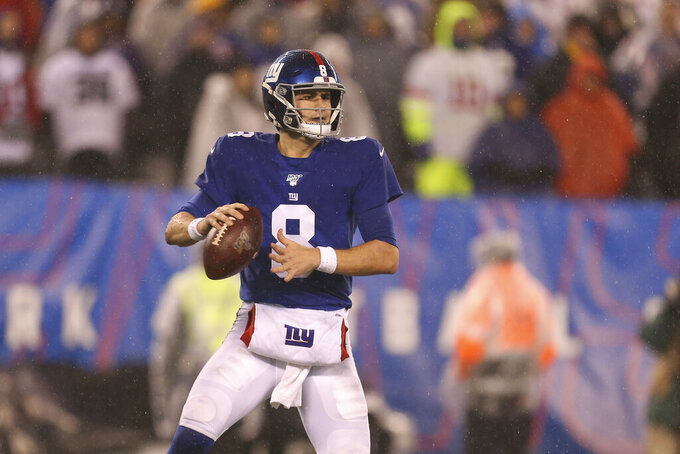 FILE - In this Dec. 29, 2019, file photo, New York Giants quarterback Daniel Jones (8) looks to pass during an NFL football game against the Philadelphia Eagles in East Rutherford, N.J. Jones is facing a much different challenge in his second season with the Giants. The No. 6 pick overall in the 2019 NFL draft is no longer a rookie and he is not at training camp as the understudy and heir apparent to Eli Manning as the Giants' quarterback. Unless something drastic happens, Jones will be the starter when New York kicks off the Joe Judge-era as coach in a Monday night home game against the Pittsburgh Steelers. (AP Photo/Vera Nieuwenhuis, File)

Daniel Jones is facing a much different challenge in his second season with the New York Giants.

The No. 6 pick overall in last year's draft is no longer a rookie, and he is not at training camp as the understudy and heir apparent to Eli Manning as the Giants' quarterback.

Unless something drastic happens, Jones will be the starter when New York kicks off the Joe Judge era as coach in a Monday night home game against the Pittsburgh Steelers.

Jones took over the Giants starter three games into last season and played every game but one.

Much has changed since.

Manning, who led the Giants to two Super Bowl championships, retired after last season. Coach Pat Shurmur was fired and replaced by Judge, a former Patriots special teams coordinator. Former Cowboys coach Jason Garrett was hired to be the offensive coordinator. And then there is the coronavirus pandemic.

It's all new to Jones, and he will have to face the Steelers without the benefit of testing the new offense in a preseason game. The NFL and players' union agreed to cancel the four-game preseason because of the virus. Teams are holding training camps in very isolated conditions.

“You know, no one is playing preseason so we are all operating on the same rules, on the same outliners as far as practice and then into the season," Jones said in a virtual call Thursday. "All we can do is prepare as well as we can in the time we have and make sure we’re getting the most out of every single day.”

Jones would not concede that a veteran quarterback playing in the same offense as in past year would have an advantage. He said his job is to learn the new system in practice and be ready on opening night.

Jones will have his three top receivers back in Darius Slayton, Sterling Shepard and Golden Tate, along with tight end Evan Engram. Halfback Saquon Barkley also can be grouped in the receivers group, meaning New York has its top five passcatchers back.

For now, Jones is simply trying to learn the new offense. He has seen a lot of it before from his days at Duke and with the Giants last year. He noted that comparing it to last season does not help.

“We’re taking it day by day and install by install and trying to learn it as quickly as we can and as well as we can,” he said.

If Jones has to improve on anything over his rookie season, it is ball security. He lost 11 of 18 fumbles.

Jones has added just under 10 pounds in the offseason and he feels good. He has also enjoyed working with Garrett.

“He is extremely detailed in his thinking and what he expects on the field," Jones said, “and I think that is probably what has stood out the most.”

Dealing with the coronavirus is new. Jones said he never considered opting out of this season. He added he respects the decisions of those who decide not the play.

Players have to social distance and wear masks at camp.

“It’s different, but it’s not hard and it’s not getting in the way of us doing our work," the 23-year-old QB said. ”As long as we’re conscientious about it, I think we haven’t had any problems with the policies and the procedures."