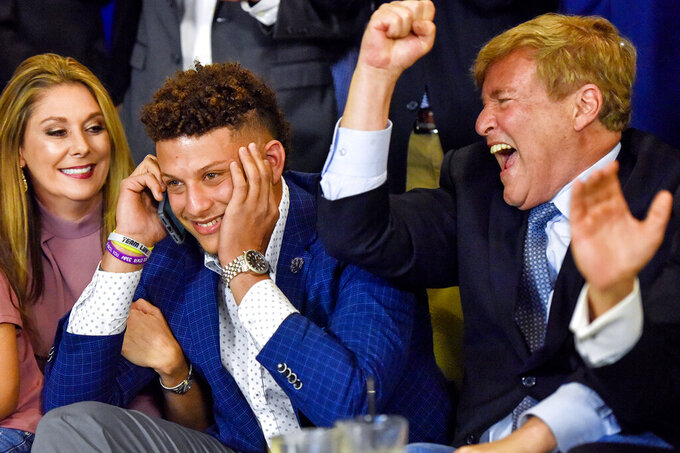 At least for now, that includes the 2021 season.

The Chiefs exercised their fifth-year option on their star quarterback on Thursday, ensuring he will be under contract for at least the next two seasons. But general manager Brett Veach and coach Andy Reid are hoping to reach a long-term deal with Mahomes by the start of training camp, one that could last four or five years and make the third-year pro the first player in NFL history to make at least $40 million per season.

“I would like to think we're fairly confident and we have a lot of time,” said Veach, who is also trying to hammer out a long-term deal for Pro Bowl defensive tackle Chris Jones. “These players are cornerstones of the organization. Now that the draft is over, the free agency period — here with this pandemic, there was a lot of disruption — now that this is behind us, we have a window where we can reset as an organization and get together.”

The Chiefs had until May 4 to exercise their option on Mahomes, who is due to make $825,000 on the final year of his rookie contract and would make nearly $25 million during the option year. The team has not announced its decision, but a person confirmed the move to The Associated Press on condition of anonymity.

Teams are allowed to use a fifth-year option on players selected in the first round of the NFL draft.

“I think you rely on communication, trust, creativity, dialogue,” Veach said. “We have time, and the ultimate goal for both camps is the same, and that's to establish a long line of winning here, and to continue the foundation that we laid the day we drafted him, then going to the AFC championship game, then following up with a Super Bowl win.”

The champion, the first in five decades for the organization, merely cemented Mahomes as the face of the franchise.

The Chiefs traded up to select him 10th overall in the 2017 draft, and he spent one season learning the ropes under Alex Smith before getting the starting job. Mahomes proceeded to shatter just about every franchise passing record while winning the league MVP award, and he had the Chiefs within overtime of landing in the Super Bowl that season.

Mahomes dealt with numerous injuries this past season, including a dislocated kneecap on a seemingly innocent quarterback sneak that left him sidelined for a couple games. He came back to lead the Chiefs to a long winning streak that culminated with a series of come-from-behind wins in the playoffs, including their second-half rally to beat the San Francisco 49ers 31-20 in the Super Bowl in Miami.

Chiefs chairman Clark Hunt, who acknowledged he will be “intimately involved” in the negotiations, declined to put a timetable on signing Mahomes to a contract. But considering the total value could be the first to exceed $200 million in league history, the Chiefs and Mahomes' agent, Leigh Steinberg, plan to take as much time as they need.

“I know that it's something that's going to get done in the near-term,” Hunt said. “I don't want to say we've been talking about this weekly because Brett has been very focused on the draft. Patrick's contract hasn't been a priority over the last month. But going forward, it will be.”