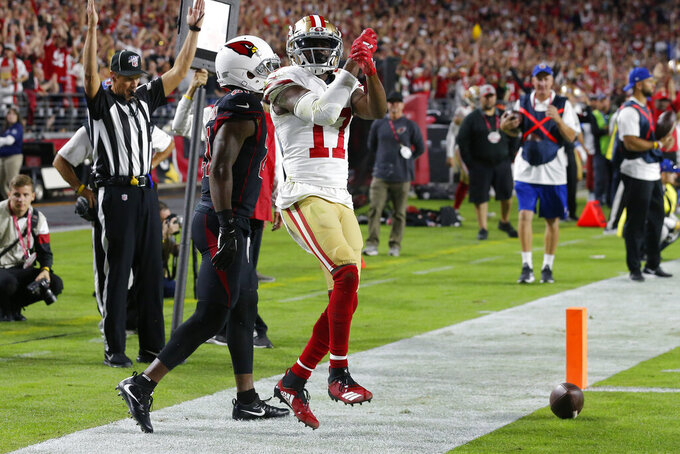 SANTA CLARA, Calif. (AP) — Emmanuel Sanders got acclimated in the San Francisco offense so fast that he caught a TD pass on his first drive with the team five days after being acquired by the 49ers in a trade from Denver.

Sanders only built from there by posting the most prolific receiving performance this season for the 49ers four days later as he already has become Jimmy Garoppolo's No. 1 outside target.

"I'm not surprised," Sanders said. "I really didn't give it any thought. My job is to come in, make plays and be in the perfect spot. His job is to deliver the football. We were able to do that."

The Seattle Seahawks can only hope for as seamless a transition from their new big-play wideout. Josh Gordon could make his debut on Monday night for Seattle (7-2) in an NFC West showdown against the 49ers (8-0).

The addition of Gordon to a wide receiver group that already includes the dynamic Tyler Lockett and impressive rookie D.K. Metcalf will make Seattle's passing game even more dangerous as soon as he becomes more comfortable in the offense and forms a good chemistry with Russell Wilson.

"It can be difficult. It can be hard on the fly," Gordon said. "You want to be able to just move without thinking as much. Getting to that part of the game is the most important part for me, making everything kind of more second nature. As long as you study and ask questions, the less doubts you have. For me, that's been my experience. I'm pretty well knowledgeable about certain offenses, talking to Coach Schottenheimer, talking to Russ. They've been instrumental in bringing me along in this process."

Gordon was claimed off waivers by Seattle last week after being waived by New England following injuries to his knee and ankle. He passed a physical with the Seahawks and got on the practice field this week.

Before being released, Gordon was among New England's leading receivers this season, with 20 catches for 287 yards and a touchdown through six games. He has dealt with several substance abuse suspensions in his career but also has shown great ability, with a league-leading 1,646 yards receiving in 14 games in 2013 with Cleveland.

The Seahawks can only hope it goes as well as Sanders' did in San Francisco after being acquired along with a fifth-round pick from Denver for third- and fourth-round draft picks in 2020 on Oct. 22.

Sanders took a quick crash course in an offense that was similar to the one he played in with the Broncos, whose coordinator Rich Scangarello spent the previous two seasons as quarterbacks coach for the 49ers.

Sanders then caught two passes on his first drive with San Francisco, including 4-yard TD from Garoppolo in a win over Carolina. He finished that game with four catches for 25 yards.

Sanders was even better last week with seven catches for 112 yards and a touchdown in a 28-25 win at Arizona, giving the 49ers the No. 1 receiver that has been one of the only missing ingredients this season.

But there's more than toughness that has helped Sanders assimilate. There's also a trust with Garoppolo that has led to the early success.

Never was that more evident than on a third-down play last week against Arizona, when Garoppolo started his throw well before Sanders began his break, only to have the ball arrive at precisely the right moment for a 22-yard gain.

"He's savvy," Garoppolo said. "He knows what to do, feels space when it's zone and he beats the guy when it's man. It's a nice combination. He's so smart that he just does things that, as a quarterback, you love to see, and it makes it easy on you to throw the ball to him."