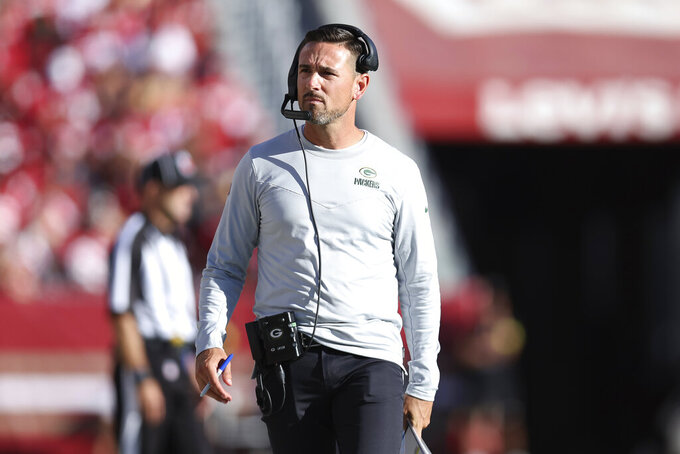 GREEN BAY, Wis. (AP) — The Green Bay Packers received some good news on their collection of players coming back from knee injuries.

“It’s just like the next step in the process,” LaFleur said. “It’s not like they’re going to be out there in team drills. But they’ll do some individual and with them being back, now it allows you to do some walkthroughs which is going to be obviously very beneficial for, especially for a guy who hasn’t played in the National Football League like Christian.”

This is a particularly encouraging sign for Jenkins, who tore his left anterior cruciate ligament in November.

“I didn’t feel no pain, didn’t feel anything, so it felt good out there,” Jenkins said after Sunday afternoon's practice.

LaFleur was asked if this move means Jenkins could be ready for the Sept. 11 season opener at Minnesota.

“Everything’s on the table,” LaFleur said. “Again, I’m not going to hold my breath on that. He’ll be ready when he’s ready. We’re not going to rush him back. I can tell you that right now.”

Jenkins’ early return would boost an offensive line that is missing left tackle David Bakhtari, who earned first-team All-Pro honors in 2018 and 2020 and was a second-team selection in 2016, 2017 and 2019. Bakhtiari remains on the PUP list and has appeared in only one game since tearing his left ACL on Dec. 31, 2020.

Jenkins has started games at every position on the line other than right guard. He was a Pro Bowl selection at left guard in 2020 and filled in for Bakhtiari at left tackle last season before getting hurt in a Nov. 21 loss at Minnesota.

“Going out there today in pads, with helmets on, it’s been a minute since I did that, so I feel like it’s a mental hurdle that you've got to get over,” Jenkins said. “The knee (feels) fine. Everything (feels) fine. It’s just that thought process of what I’ve been through the last nine months.”

Tonyan tore his ACL in an Oct. 28 victory at Arizona. He had 18 catches for 204 yards and two touchdowns in eight games last season after collecting 11 touchdown receptions in 2020.

"It’s been a long process," Tonyan said. “I was just kind of feeling a little out of the football loop for a little bit. So, to get back in there, running plays and lining up next to people and being in the huddle again was just a positive on my life in general.”

Watson, a second-round pick from North Dakota State, said he had an issue with his knee during organized team activities and had surgery afterward.

“Obviously that’s a personal goal of mine, to be able to play at the start of the season, but in terms of a timetable there still isn’t really a timetable,” Watson said. “Just trying to build up each and every day, and as long as it’s feeling good, continue to progress.”

In other injury news, LaFleur said safety Dallin Leavitt will be out for “a while” after leaving the Packers’ 28-21 preseason loss to the San Francisco 49ers with a shoulder injury.

Mason Crosby, the Packers' kicker since 2007, is on the PUP list after undergoing what he described as a “minor scope on the knee” before training camp.